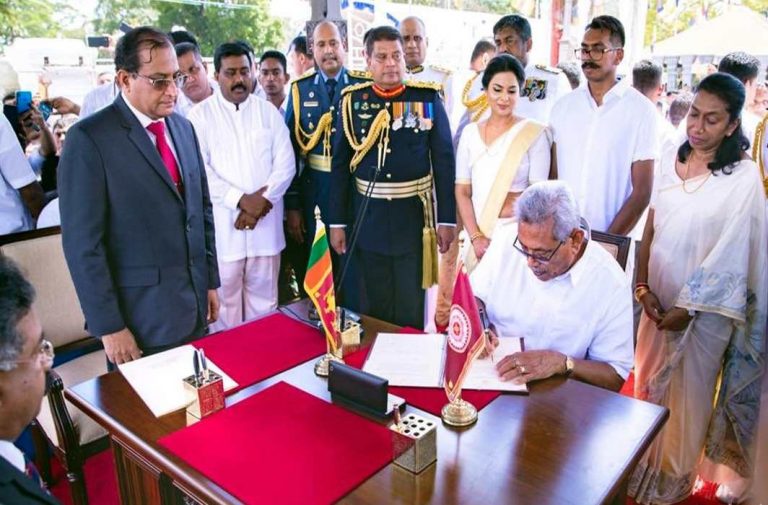 By keeping key ministries within the family President Gotabaya Rajapaksa may have ensured a tight grip over the administration, but challenges remain on other fronts

With the swearing in of Gotabaya Rajapaksa, the Eelam war hero and controversial former defence secretary, as the president of Sri Lanka, the Rajapaksas are back in power at a critical time in the country.

Only five years back, the people of Sri Lanka had thwarted then president Mahinda Rajapaksa’s bid for a third term in office. His authoritarian style coupled with allegations of corruption and misuse of office clouded his success in ending the Tamil Tigers’ separatist insurgency. However, the last five-year rule of President Maithripala Sirisena and prime minister Ranil Wickremesinghe fell far short of people’s expectations in delivering good governance which they had promised, with their endless squabbles virtually paralysing government functioning in the island nation.

Perhaps the main reason why most of the Sinhalas voted for Gotabaya was the Easter Sunday massacre of 259 people by ISIS-inspired and home-grown Jihadi terrorists last April. It created a huge scare among the people who are yet to fully recover from the after-effects of fighting Tamil separatist insurgency for nearly three decades. The terrorist attack created a ripple effect. It exposed huge gaps in the national security fabric. People were shocked to learn that the government failed to act upon receiving information on the impending terrorist attack, two weeks in advance. Further inquiry into the attack revealed that both Sirisena and Wickremesinghe failed to nip jihadi terrorism in the bud when the first indications of Islamist extremist activity were brought to their attention.

The public opinion thus swung in favour of electing Gotabaya as he was seen as a strong man who will revamp the national security structure to make it more effective. Gotabaya’s winning chances further improved as the terrorist attack became a rallying call for conservative Buddhists to defend the land they consider the last bastion of Theravada Buddhism. In their previous tenure, the Rajapaksas had pampered Sinhala Buddhist nationalism and soft-pedalled on fringe elements spouting anti-Muslim hate rhetoric and attacking Muslims. Their votes were naturally his.

One of the first actions that Gotabaya—who completed two months in office on January 17, 2020—took was to instal his brother, Mahinda, as the interim prime minister even as he placed another brother, Chamal, as the minister of agriculture. The three brothers, between them, control the ministries of defence, public security, finance, economy and policy development, Buddhasasana and cultural and religious affairs, urban development, water supply and residential facilities.

President Gotabaya has acknowledged that the Sinhala majority vote “allowed me to win the presidency”. He will thus come under pressure from the Sinhala majority to deliver upon his pre-election promises. For that, he will need his party, the Sri Lanka Podujana Peramuna (SLPP) to win an absolute majority in the parliamentary polls to be held in March 2020.

In an interview, Gotabaya said that the 19th amendment that curbed the powers of the president was “a failure and if we get 2/3 majority in parliament we will drop it from the constitution”. So in the near term, Gotabaya’s actions will be aimed at securing an absolute majority in the parliamentary elections.

Soon after Gotabaya came to power, there were disturbing trends reminiscent of the past Rajapaksa authoritarian rule, with some smacking of vindictiveness. A Special Presidential Commission (SPC) was appointed to probe those responsible for falsely implicating people in murders or related investigations. State investigative agencies like the Criminal Investigation Department (CID) and the Financial Crimes Investigation Division (FCID) had been investigating a number of cases involving the Rajapaksas.

Even before the SPC probe started, Chief Inspector Nishantha de Silva, head of the organised crimes division of the CID, fled with his family to Switzerland to seek asylum. He was handling high-profile cases involving members of the Rajapaksa family which included important ones like the killing of Lasantha Wickrematunga, the editor of The Sunday Leader. After the police officer fled, there was a nasty backlash when a Sri Lankan woman staffer of the Swiss embassy alleged that she was abducted, questioned and tortured by unknown persons. In the police investigations that followed, the woman was arrested for making false allegations.

The arrest of two former ministers, Dr Ranjitha Senaratne and Champika Ranawaka, of the Sirisena government, who were at the forefront of the campaign to defeat Mahinda Rajapaksa in the 2015 presidential elections, appears to be another example of vindictiveness. While Ranawaka was arrested in a case of accident of 2016 vintage, Senaratne was arrested in connection with a news conference he held two days before the presidential elections in which he produced two persons who claimed to be drivers of white vans that carried out abductions during the Rajapaksa rule. Though both leaders have been released on bail, the action sends a strong message to the opposition that the Rajapaksas will neither forget nor forgive.

Administratively, Gotabaya has shown that he is the master of his own actions. He has introduced steep tax cuts in income tax which he had promised during campaigning. He ordered the removal of portraits of all politicians, including the president and ministers, from the walls of ministerial offices. He drastically pruned defence personnel assigned on presidential and ministerial security duties.

The number of security vehicles accompanying VIP convoys was also slashed and authorities were directed not to hold up traffic on roads unnecessarily when VIP convoys moved. Newly inducted ministers were advised to assume their duties immediately after they were sworn in. Ministers have been advised not to take their spouses when they go abroad on official duties. All these have reinforced his popular image as a man of action.

Unlike his brother, Mahinda, Gotabaya has appointed qualified and experienced persons to head state institutions, instead of political people. Dr PB Jayasundara, an economist, was appointed secretary for revamping the country’s sinking economy. The president has chosen Dr DWD Lakshman, an economist not tainted by the infamous bond scam, as the governor of the Central Bank of Sri Lanka. Similarly, Gotabaya appointed Prince Sarojini Manmatharajah Charles, a senior Tamil civil servant with vast experience, as the governor of the Northern Province. During the conflict in 2009, Charles was in charge of the refugee camps in Vavuniya, housing about 2,90,000 people from the war-torn districts.

The president presented the “Vision for Progress” policy statement when he addressed the parliament for the first time on January 3. Read with his earlier statements, the key elements of the policy include national security concerns, particularly relating to jihadi terrorism, tax cuts and incentives for small and medium enterprises, skill-building, reducing inflation and beefing up economy and actions to “curb corruption and prosecuting the corrupt”. He had also proposed other structural changes to revamp the economy and strengthen security apparatus, including the intelligence set-up.

There is a sense of déjà vu among civil society and minorities who fear that the country could see the return of authoritarianism. P Sampanthan, leader of the Tamil National Alliance, has said the president’s statement that development would be prioritised in resolving the ethnic conflict, would not fulfil the long-standing desire of the Tamils to develop within a united Sri Lanka on their own terms. They are also dismayed at Gotabaya’s assertion that there was “no problem of missing persons to be resolved” except those who fell on the battlefields. This statement neutralises what little progress was made in 2017 when the government created the Office of the Missing Persons to expeditiously deal with cases of missing persons and enforced disappearance.

The Tamils are shocked at the announcement that the national anthem would be sung only in Sinhala and not in Tamil at the Independence Day celebrations in the country. The fringe elements among the Buddhist clergy had welcomed the move. After a lot of public outcry over the issue, the prime minister clarified that no decision had been taken on the issue.

On the international front, the president’s priority appears to be to improve relations with India and Prime Minister Narendra Modi in particular, perhaps to use India to improve his bargaining position with China. He responded positively to Modi’s invitation to visit New Delhi. The invitation was extended soon after he became president. For India, the visit was strategically significant as the Rajapaksas were seen as close to China. Gotabaya needs India’s support to improve national security, combat Islamist terrorism and enable economic recovery. Though Modi had raised the issue of the full implementation of the 13th Amendment giving limited autonomy to Tamils, Gotabaya later said the 13th Amendment could not be implemented “against the wishes and feelings of the majority community”.

China had been watching with concern after Gotabaya during his visit to India termed the agreement with China on the Hambantota Port as a “mistake” and called for it to be negotiated. However, Gotabaya felt the fallout of the statement after returning home. He later told foreign correspondents in Colombo that there was no need to renegotiate the Hambantota agreement but the security aspects needed to be looked into.

Though the Chinese reacted quickly with a statement reminding that the agreement could not be renegotiated, the president is expected to take up the issue of redrafting some clauses of the agreement when he visits Beijing shortly.

Overall, Gotabaya has, by keeping control of key ministries within the dynasty, ensured a tight grip over the country.

—The writer served as the head of intelligence of the IPKF in Sri Lanka. He is associated with the Chennai Centre for China Studies, South Asia Analysis Group and the International Law and Strategic Analysis

Lead: Gotabaya Rajapaksa took charge as the president of Sri Lanka last year at a critical time for the country/Photo: UNI