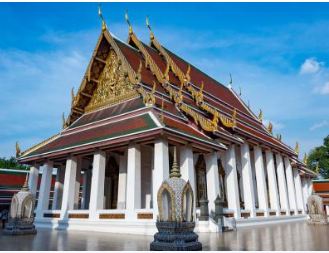 A BANGKOK court has acquitted five senior monks of money laundering charges in connection with a temple fund embezzlement scandal. The court also returned the money that was frozen during investigation. Later, the monkhood of all the five monks Phra Phrom Sitthi, Phra Ratchakitchaphon, Phra Ratchauppasenaphon, Phra Sikhunaphon and Phra Khru Siriwihan was reinstated at a rite organised by Wat Sa Ket temple in Bangkok recently.

The charge was related to the spending of a 3.5 million baht budget set aside by the National Office of Buddhism (NOB) to finance the construction of temple buildings in 2014. The fund was, however, found to be part of an embezzlement scam involving NOB officials.

Former auditor general Pisit Leelavachiropas, in his capacity as a member of the Maha Chulalongkorn Rajavidyalaya University council, said that the police and public prosecutors hadn’t ordered the monks to formally leave the monkhood, even though they were formally stripped of their robes. The judges still recognised them as monks and they had appeared in court as monks, not laymen. As soon as they were released on bail, they switched back to wearing their robes and resumed their roles at the temples, said the source.

Lawyer Arlette Schijns, speaking for relatives of people killed in the 2014 downing of Malaysia Airlines Flight 17 over eastern Ukraine, had told a court that 290 relatives and partners of the victims have filed compensation claims for emotional distress against the four suspects charged in the downing. Schijns told judges: “No compensation can offset the losses suffered by relatives. That said, compensation can provide a feeling of recognition when it comes to moral damage and can also offer a certain feeling of justice.” She said around 90 relatives want to make victim impact statements during the trial, which is expected to begin hearings on the substance of the charges in June.

This is a long-running legal proceeding wherein none of the suspects have appeared in court so far and the case is proceeding in their absence. After a long international investigation, three Russians Igor Girkin, Sergey Dubinskiy and Oleg Pulatov and a Ukrainian named Leonid Kharchenko were charged with involvement in shooting down the Amsterdam to Kuala Lumpur flight on July 17, 2014, wherein all 298 people on board the Boeing 777 were killed. Prosecutors say the plane was shattered in mid-air when it was hit by a Buk missile system trucked into Ukraine from a Russian military base. Russia denies any involvement in the downing.

The UK Home Office on Friday approved the extradition of fugitive diamantaire Nirav Modi to India. UK Home Secretary Priti Patel approved the extradition of the diamond merchant, who has been accused of being the principal beneficiary of the fraudulent issuance of letters of undertaking as part of a conspiracy to defraud the Punjab National Bank to the extent of Rs 13,570 crore. Modi is wanted in India in connection with the $2-billion PNB scam case.

The development came after Nirav lost a legal battle against deportation to India, in the UK on February 25. The UK Westminster Magistrates’ Court in its 83-page order had struck down Nirav’s defence that he won’t be given a fair trial in India. The court pronounced the extradition verdict on February 25. Pronouncing the verdict, the district judge Samuel Goozee ruled that a prima facie case of money laundering is established. Noting that the Letters of Understanding had been issued between 2011 and 2017 without being entered in the Core Banking Solution (CBS) system of the bank to mislead authorities, he did not accept that the accused was involved in a legitimate business. Expressing satisfaction that Nirav Modi could be convicted, the judge also rejected other arguments made by the defence counsel.

Jacob Zuma, the former President of South Africa, has been asked to suggest what sentence he should be given if found guilty of contempt of court. Mogoeng Mogoeng, the Chief Justice of the country’s Supreme Court, directed Zuma to file an affidavit of no longer than 15 pages, explaining “The nature and magnitude of sentence that should be imposed” on him. It is still unclear if the former President will honour the directive.

In a marked deviation from the standard rule book, the court wanted Zuma to determine what constitutes the appropriate sanction if he is found guilty.  Experts say it was uncommon for the court to issue such a directive.

During his nine-year rule from 2009 till his resignation till February 2018, Zuma, 79, has repeatedly snubbed a judicial panel investigating the plunder of state coffers, claiming bias on the part of its chair and political interference in the judiciary. The former head of state testified only once in July 2019 before staging a walkout days later. On January 28, The Constitutional Court ordered Zuma to appear before the commission led by Deputy Chief Justice Raymond Zondo, but he ignored the order. Zondo then petitioned the country’s top court to jail the scandal-tainted former leader for two years.

THE Islamabad High Court on Thursday asked the Ministry of Foreign Affairs to clear with India the misunderstanding over the court’s jurisdiction to hear the Kulbhushan Jadhav case in the implementation of the verdict of the International Court of Justice (ICJ). Chief Justice Athar Minallah of the court observed that “it seems that the Indian government has a misunderstanding about this court’s proceedings and that the matter involves the jurisdiction of not only this court, but that of the implementation of the verdict of the ICJ.” Justice Minallah further directed the Foreign Office to contact the Indian government to clear the air.

Jadhav, a 50-year-old retired Indian Navy officer, was sentenced to death by a Pakistani military court on charges of espionage and terrorism in April 2017. India approached The Hague-based ICJ against Pakistan for denial of consular access to Jadhav and challenging the death sentence. The ICJ ruled in July 2019 that Pakistan must undertake an effective review and reconsideration of the conviction and sentence of Jadhav, and also grant consular access to India without further delay. The ICJ, in its 2019 verdict, had asked Pakistan to provide a proper forum for appeal.