Kulbhushan Jadhav given right of appeal by Pak National Assembly 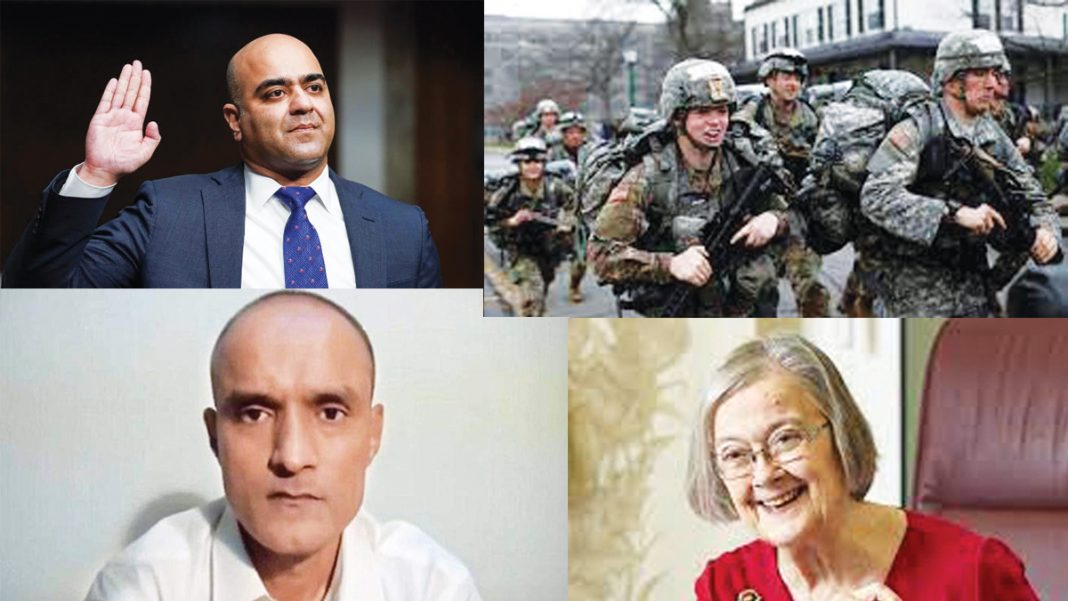 Kulbhushan Jadhav given right of appeal by Pak National Assembly

PAKISTAN’S NATIONAL assembly approved a bill that would allow Indian national Kulbhushan Jadhav to appeal his conviction in a Pakistan court. The bill was adopted by the National Assembly after approval from the 21-member standing committee.

As per the bill—now called the International Court Of Justice (Review and Re-consideration) Act—the High Court has the power to review and reconsider where the International Court Of Justice in relation to a foreign national passes an order in respect of rights under the Vienna Convention of Consular Relati ons or a foreign national is aggrieved in respect of the rights available under the same.

It is alleged by the Pakistani government that Jadhav was arrested in the Pakistani province of Balochistan on charges of terrorism and spying. The Indian foreign ministry rejected the allegations put by Pakistani military court and stated that he had been “kidnapped last year from Iran and his subsequent presence in Pakistan has never been explained credibly”.

In April 2017, Jadhav was sentenced to death by a Pakistani court.

Currently, there are 13 foreign judges sitting as non-permanent members of Hong Kong’s court of final appeal and Baroness Brenda Hale is one of them.

In China, the courts are beholden to the Communist Party, where as Hong Kong’s judicial system remains independent and is based on the common law.

China’s imposition of a sweeping national security law last year has sparked concerns in some legal circles about whether judicial independence can be maintained.

Hale mentioned the impact of the security law as she announced she would not seek a second term on the Hong Kong court when her tenure ends in July. “The jury is out on how they will be able to operate the new national security law. There are all sorts of question marks up in the air. I don’t wish to be reappointed,” Hale has been quoted as saying.

THE US Supreme Court (SC) dismissed the challenge by a men’s rights group to the national requirement that men must register for the military draft at the age of 18 but not women. The main focus was on whether the policy violated the US Constitution’s guarantee that laws are equal for everyone. The judges turned away the appeal. The lawsuit was meant to invalidate a 1948 US law that compels only men to register for the military services.

By ruling out this appeal, the justices left in place the lower court ruling and 1981 SC ruling that at that time women were not allowed to serve in the armed forces.

The military draft was discontinued in 1973 in the Vietnam war era, but men still have to register themselves for the draft in the event that a national emergency requires a rapid expansion of the armed forces. They can face penalties for refusing. The US defence department lifted the ban on women serving in armed forces in 2013.

US PRESIDENT Joe Biden’s nomination of a magistrate judge, Zahid N Quraishi, in New Jersey to the Federal bench got approved by the US Senate, making him the first Federal Muslim judge in American history. Quraishi is the son of Pakistan immigrants and is a former federal and military prosecutor.

Senate Majority Leader Chuck Schumer of New York noted that while Islam is the third-largest religion in the US, no Muslim has ever served on the federal bench. “We must expand not only our demographic diversity but professional diversity, and I know that President Biden agrees with me on this and this will be something that I will set out to do,” Schumer said.

When Quraishi was appointed magistrate in 2019, it did not require the approval of the Senate. He was a partner in the white collar criminal defence practice of New Jersey law firm Riker Danzig Scherer Hyland & Perretti. He also worked as an assistant US attorney, assistant chief counsel with the Department of Homeland Security, and a prosecutor with the US Army Judge Advocate General’s Corps. Quraishi served two tours with the Army in Iraq, in 2004 and 2006.

WHILE FUGITIVE diamond trader Mehul Choksi, wanted by Indian probe agencies for allegedly cheating the Punjab National Bank over Rs 13,000 crore, wants to renounce his Indian citizenship, the Indian government informed the Dominica court that the government had not revoked his citizenship.

The Indian government maintained that Choksi was an Indian citizen—hence deportation is possible—while Choksi has also taken up citizenship in Antigua.

An affidavit was filed by deputy inspector general that states that Choksi was misleading the Dominica High Court by claiming there were no proceedings against him in India. The affidavit also explained the procedures of investigations and criminal trials in India. Choksi cannot be tried while he is not here in India. For the charges to be framed and trial to begin, he has to be present here, so he should be deported.