The love affair between former president Trump and the right wing “Proud Boys" is over. 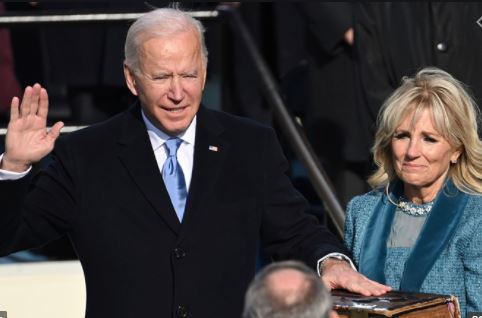 “At this hour, my friends, democracy has prevailed.” In a 21-minute speech on a chilly winter’s afternoon Joseph Biden became the nation’s 46th President, emphasizing that he wanted to restore a sense of unity to America. Never mentioning his predecessor by name, Biden said the nation you loved, respected and remembered would come back from four years of chaos.

The pandemic and the chaotic response to it that helped drive President Trump out of office was center stage: “Look, you all know, we’ve been through so much in this nation, and my first act as president I’d like to ask you to join me in a moment of silent prayer to remember all of those we lost this past year to the pandemic. Those 400,000 fellow Americans. Moms, dads, husbands, wives, sons, daughters, friends, neighbors and co-workers.”  With heads bowed the audience of about 1000 VIPs did as requested.  So did the thousands of soldiers standing guard around the capital. Television captured images of 20,000 flags planted where spectators would have been normally viewing it from the National Mall.

Exactly three weeks ago an insurrectionist mob pillaging and harming people and property swarmed this same Capitol Building complex.  Biden’s warning was the proverbial steel fist in a velvet glove.  Reminding everyone that he was president for all Americans, he said, “Stop the shouting and lower the temperature. Without unity, there is no peace. Only bitterness and fury.”

This was President Joseph Biden’s moment, attained at the age of 78, after a lifetime in public service. Former white House occupant Donald Trump had left Washington in the morning flying back to his Florida resort. Vice President Pence did attend, skipping Trump’s send off, perhaps because Trump had continued to criticize him for not interfering in the vote certification process.  The most conspicuous absence was that of Supreme Court Justice Clarence Thomas, whose contentious confirmation hearing in 1991 featured then Senator Joseph Biden on the judiciary committee.

It was a day of multiple firsts with Kamala Harris becoming the first female vice president. Additionally as the daughter of a mother who came to the USA from Tamil Nadu, she is the first Asian American to hold that office.  Her mother married a fellow doctoral student from Jamaica and thus Harris is the first black American to hold that office. As a graduate of Howard University, the most famous of the historically black Universities, located in Washington, and as a US Senator from California, she is well versed in the ways of the national capital.

With the US Senate split evenly 50-50 between the two political parties, she is the deciding Democratic vote in her role as President of the Senate. She will hardly be an invisible vice president, nor a quiet accomplice as Pence was to Trump.

Biden did not shrink from the rough issues, but was conciliatory and not a bully about it.

“We face an attack on our democracy and on truth. A raging virus, growing inequity, the sting of systemic racism, a climate in crisis. Any one is enough to challenge us in ways. The fact is we face them all at once, presenting this nation with one of the gravest responsibilities we’ve had. Now we’re going to be tested. Are we going to step up, all of us? It’s time for boldness, for there is so much to do. And this is certain. I promise you, we will be judged, you and I, by how we resolve these cascading crises of our era. Will we master this rare and difficult hour? Will we meet our obligations and pass along a new and better world to our children? I believe we must. I’m sure you do as well. I believe we will. And when we do, we’ll write the next great chapter in the history of the United States of America.”

Much of the event was emotional in a positive sense as compared to the angry emotion from three weeks ago when domestic terrorists attempted and failed an insurrection. Arrests continue of people who participated, not that difficult as they helped law enforcement by leaving evidence all over social media.

Trump broke precedent, as is his norm and skipped the ceremony much as he had skipped the legal requirements of a transfer between Administrations. Former presidents Clinton, Bush and Obama were there. Jimmy Carter, now in his 90s, remained at home in Georgia. Biden paid tribute to his efforts on behalf of humanity since leaving the White House in 1981.

Biden has announced the USA will rejoin the Paris Climate Agreement. He said his message to the world is that,

“ America has been tested, and we’ve come out stronger for it. We will repair our alliances and engage with the world once again. Not to meet yesterday’s challenges, but today and tomorrow’s challenges. And we’ll lead, not merely by the example of our power, but by the power of our example. We’ll be a strong and trusted partner for peace, progress and security.”

Professional diplomats are returning to lead the US Department of State, providing a measure of assurance of sensible behavior. French President Emmanuel Macron tweeted: “We are together… Stronger… Welcome back to the Paris Agreement.” Multiple executive actions are expected within the week as the new administration rescinds much of what the Trump regime did in areas like immigration, trade and climate.

“Through the Civil War, the Great Depression, World Wars, 9/11, through struggle, sacrifice, and setbacks, our ‘better angels’ have always prevailed. In each of these moments, enough of us came together to carry all of us forward. And, we can do so now. History, faith and reason show the way, the way of unity.”

Lady GaGA, Jay-Lo, and Garth Brooks provided songs backed by the very busy Marine band which played fanfares multiple times to welcome various dignitaries as they were announced.  The instant Biden was sworn in the band played Hail to the Chief, used exclusively for the president.

The Bidens with the former presidents then went to Arlington National Cemetery for a wreath laying ceremony at the Tomb of the Unknown Soldier.  The motorcade drive there and then to the White House was unusual because the pandemic and security requirements meant there were no crowds along the way shouting and waving to welcome the new President.

Biden basically used the Obama mantra of “Yes We Can” in different words, saying, “We have never, ever, ever failed in America when we have acted together. And so today, at this time and in this place, let us start afresh. All of us. Let us listen to one another. Hear one another. See one another. Show respect to one another. Politics need not be a raging fire destroying everything in its path. Every disagreement doesn’t have to be a cause for total war.”

“And here we stand, just days after a riotous mob thought they could use violence to silence the will of the people, to stop the work of our democracy, and to drive us from this sacred ground. That did not happen. It will never happen. Not today. Not tomorrow. Not ever. And, we must reject a culture in which facts themselves are manipulated and even manufactured. Hear me clearly: Disagreement must not lead to disunion.”

The love affair between former president Trump and the right wing “Proud Boys” is over. In dozens of conversations on social media sites like Gab and Telegram, members of the group have begun calling Trump a “shill” and “extraordinarily weak,” urging supporters to stop attending rallies and protests held for Trump or the Republican Party.