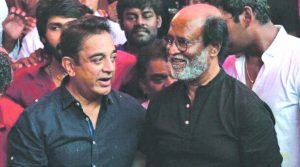 The next chief minister of Tamil Nadu could well be one of the three biggest stars in the Tamil film industry. With J Jayalalithaa’s death and DMK patriarch M Karunanidhi rendered hors de combat because of illness and old age, the field is wide open. Tamil Nadu has a history of movie stars entering politics and three of its current stars have recently released their political trailers. Rajinikanth was the first to announce his political ambitions. He is yet to launch a party but has made his ideology clear—saffron is his preferred colour. The other big star, Kamal Haasan, also formally launched his political career last week in controversial fashion with his remarks on Hindu terror and intolerance. No official party yet but “Citizen K” is born with an ideology opposite to his real life rival, Rajinikanth. The third star is Vijay who took on demonetisation and GST in his latest film Mersal and earned the wrath of the right-wing. He has dabbled in politics earlier when he joined Anna Hazare and his anti-corruption movement. He has a wide youth following in Tamil Nadu and the other two have huge fan bases of their own, so it will be an epic battle, quite like the movies they make. 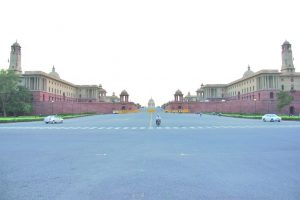 Last year, the Modi government changed the rules for civil servants regarding promotions and evaluations. Since Independence, bureaucrats have been promoted on the basis of the annual confidentiality report written by the immediate boss in the ministry/office. The Modi government introduced the 360 degree process for additional secretaries and secretaries. This means that evaluation is to be based on feedback from multiple sources, including colleagues and juniors. This is done in secret by a group of three retired bureaucrats. Most civil servants have been upset with the move since they feel it is unfair and opaque. Bureaucrats in Madhya Pradesh took a stand against the method recently and Himachal Pradesh bureaucrats have approached the Central Administrative Tribunal (CAT) for a review. The Tribunal has written to the cabinet secretary and asked for a response by November 13. Whatever the outcome, bureaucrats are not happy with the process and the only reason the issue has not blown up is because they fear that they will be targeted.

THE RISE OF SIS

Two of those named in the so-called Paradise Papers have close connections to the NDA government and both happen to be Sinhas. One is Jayant Sinha (right), minister of state for civil aviation, and the other is RK Sinha, BJP Rajya Sabha MP and one of the richest men in the Upper House. While Jayant has said no transactions were done for personal gain, RK has taken the unusual but suspect stand that he is on a vow of silence for a week. According to the leaked documents, he is linked to two off-shore entities registered in Malta in 2008 through a subsidiary of his security behemoth, SIS. The spotlight is on his incredible rise. He started as a trainee reporter with a Patna newspaper and today owns a cash logistic company with revenues of Rs 4,500 crore. During demonetisation, it was his vans and employees who worked overtime to replenish ATMs across the country. SIS has expanded its portfolio and is now run by son Rituraj, while RK—as he is referred to in political circles—concentrates on his political role, mostly on instructions from Nagpur.