Justice DY Chandrachud said that technology can be used to end the feudal structure in the judiciary. All judges are equal and the Constitution should be amended and “subordinate courts” renamed as “district judiciary”. 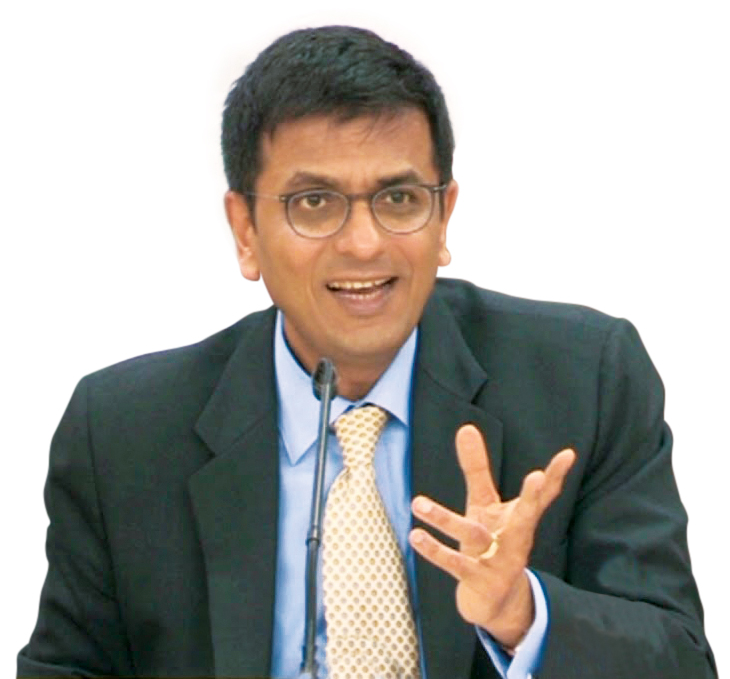 A few days ago, while speaking at a National Conference on Mediation and Information Technology, organised by the High Court of Gujarat, senior Supreme Court judge Justice DY Chandrachud said that the Indian judiciary continues to be “feudal” and it should change its mindset to become “modern and futuristic”. He suggested enhancing the use of technology to modernise the judiciary and end the feudal structure.

Justice Chandrachud further said that technology can be useful to bring necessary reforms to the judicial system. He said that inspection of districts, which is a source of stress to the district judiciary, can be radically changed if we allow electronic registers for inspection by the High Courts. “Likewise, when we assess the performance of judicial officers, or promotion of judges all the way across, I believe, not just from district judiciary to High Courts but from High Courts to the Supreme Court, we can do a lot to assuage the grievance that our processes are not objective and we can assuage that grievance provided we use technology in an objective manner for those who are under consideration for higher judicial office. So I do believe that technology is full of untapped potential for changing the face of the Indian judiciary and for making it more modern,” said Justice Chandrachud in his virtual address.

Recently, some states like Himachal Pradesh took steps to abolish this culture by replacing the word “subordinate courts” with district judiciary. This is a good decision that should also be emulated by other states to protect the dignity of judges working at the grassroots level.

Time and again, many public intellectuals, legal thinkers and constitutional pundits have raised this issue on different platforms but no effective action has yet been taken to abolish the feudal culture from the judicial branch of the state either by Parliament or the Supreme Court.

District judiciary needs a dignified treatment. In one of his articles in the mainstream media, eminent legal philosopher Professor Upendra Baxi also raised concerns against feudalism in the judiciary. He said: “I have always pointed out at public fora and in my writings that the expression ‘subordinate courts’ used by Part VI, Chapter 6, of the Constitution of India cannot signify that judges are indeed so. This inelegant enunciation menaces the independence of the judiciary, entrenched with and since Kesavananda Bharati (1973) as the essential feature of the basic structure of the Indian Constitution. Now is the time for Parliament to remove the substantial nomenclature of ‘subordinate judiciary’ and the courts to eliminate the last vestiges of judicial feudalism—the moral fault line of judicial hierarchy.”

Further, Professor Baxi states: “When I rhetorically posed a question to then Chief Justice of India YV Chandrachud at a public meeting, he was visibly annoyed and retorted: ‘What is the difference between the CJI and the sarpanch of a nyaya panchayat?’ I meant no disrespect to him or the judiciary. To his credit, he contained his annoyance but the fact is that no judge is ‘subordinate’ to any other. As constitutional beings, judges are limited in jurisdiction but also supreme within their own jurisdiction. However, Article 235 speaks of ‘control over subordinate courts’. This Article adds insult to injury by describing these entities and agents as persons ‘holding a post inferior to the post of a district judge. The Constitution no doubt contemplates a hierarchy of jurisdictions, but no judge acting within her jurisdiction, is ‘inferior’ or ‘subordinate’. On appeal, or review, a court with ample jurisdiction may overturn and even pass judicial strictures but this does not make the concerned courts ‘lower’ or ‘inferior’ courts. True, High Courts always have considerable powers of superintendence on the administrative side but this ‘supervisory’ power has been recognised by the apex court as a ‘constitutional power’ and subject to the right of appeal as granted by Article 235.”

Professor Baxi offers a few suggestions to end the feudal culture in the judiciary:  “My view endorses a complete recasting of Article 235, which does away with the omnibus expression of ‘control’ powers in the High Courts. They may exercise ‘supervision’ under detailed performance norms. But there is no reason why for most matters (save elevation), senior-most district judges and judges of the High Courts may not constitute a collegiate system to facilitate judicial administration, infrastructure, access, monitoring of disposal rates, minimisation of undue delays in administration of justice, alongside matters concerning transfers, and leave. The amendment should specifically require the High Courts to satisfy the criteria flowing from the principles of natural and constitutional justice and all judicial officers who fulfil due qualification thresholds should be treated with constitutional dignity and respect. If an ACR is to be adversely changed in the face of a consistent award for a decade or more, it should be a collegiate act of the five senior-most justices, including the Chief Justice of the High Court.”

Justice Sanjib Banerjee, former chief justice of the Madras High Court, had also spoken on this issue during his farewell function. “My regret is that I could not demolish feudal culture in which you serve,” Justice Banerjee had told the staff of the High Court. He was a brilliant judge well-known for his commitment to the cause of human rights protection and free speech.

Gone are the days of feudalism. There is no place for this culture in the 21st century which is the era of human equality and dignity. The observations made by Justice Chandrachud, Professor Upendra Baxi and Justice Banerjee need serious consideration. The chief justice of India and the chief justices of High Courts may consider sensitising the judicial community to end the feudal culture prevalent in the judiciary to protect the independence of judges working in the district judiciary, the first point of interface to the citizen. There is no place for the word “subordination” in the judiciary. All judges are free and independent. Every judge acts within his own jurisdiction. No senior judge can direct his junior judge to decide a case in a particular way. Judges are not members of the police or armed forces who need orders from their superiors to discharge their functions. All judges get their powers from the statutes and exercise them within the four corners of the statutes. Also, sufficient checks and balances are made in the judicial system to correct the errors of judicial actions.

The law of precedent ensures judicial discipline. In addition, sufficient remedies are made to approach the higher forum in appeal and revision. A judge is a judge, and his dignity must be respected by everybody including his senior colleagues in the judicial community. Therefore, the Constitution should be amended and the words “subordinate courts” should be renamed as “district judiciary”.

In the Arnab Goswami case, the Supreme Court also observed:

The writer is advocate, Supreme Court of India