While marital rape attracts constitutional provisions, its non-criminalisation promotes inequality between a couple and harms the wife’s right to live with dignity. However, proving the act is difficult due to lack of evidence. 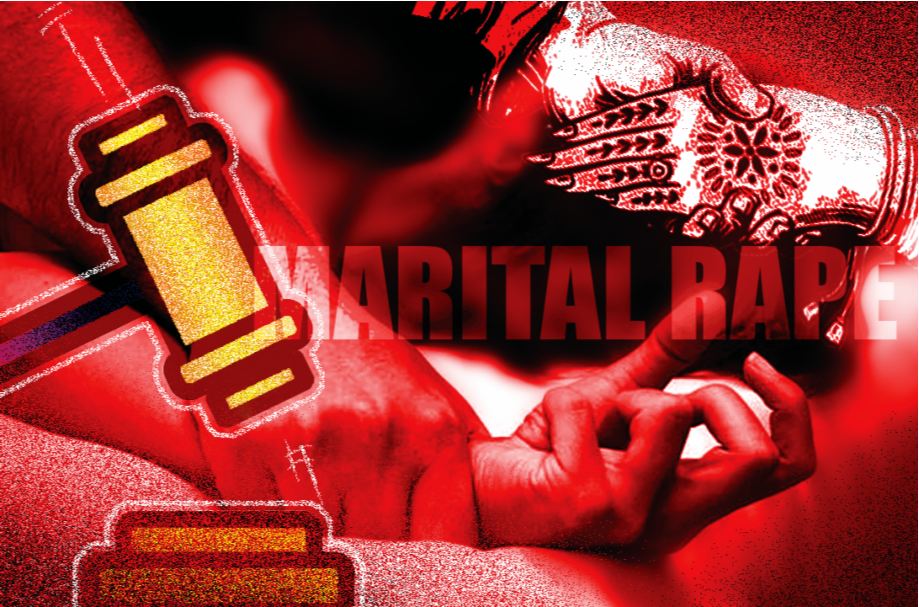 The catholicity of marriage in various societies and cultures is ascribed to essential social and personal functions such as sexual gratification and regulation in marital life. Division of labour between sexes, economic production and consumption and quenching personal needs for affection, social status and companionship are also some major factors behind the institution of marriage.

After the heinous Nirbhaya gangrape case of December 16, 2012, India witnessed an extensive public agitation that led to the formation of a three-member committee headed by former Chief Justice of India JS Verma for suggesting reforms in criminal laws. The JS Verma Committee recommended some amendments in Section 375, which were incorporated in the IPC by the Criminal Law Amendment Act, 2013.

Now the definition of rape is more inclusive and wider. The Amendment Act adds acts like penetration of the penis into the vagina, urethra, anus or mouth, or any object or any part of the body of a woman or making another person do so; to apply mouth or touching private parts constitutes the offence of sexual assault. The 2013 Criminal Law Amendment Act also attached two new explanations which clarify that penetration implies penetration to any extent and lack of physical resistance is not material to constitute the offence of rape.

Marital rape is often addressed as an oxymoron, a contemporary socio-legal issue leading to debates among various stakeholders in society. In India, marriage is considered a sacrament, though it bears certain features of contract as well. The most important question which the issue of marital rape begs is how to ascertain consent between a husband and wife, whether it is necessary to obtain approval for each transaction or whether there exists some deemed consent between a husband and wife.

Before 2017, once a woman completed 15 years, there was no legal provision for safeguarding her from rape by her husband except in circumstances where she was living separately under a decree of judicial separation or otherwise, including any custom or usage. According to Section 376B IPC, in such a case, if the husband forcibly has sexual intercourse with her without her consent, he shall be punished with imprisonment for a term not less than two years but which may extend to seven years, and shall also be liable to fine.

But in 2017, the Supreme Court in Independent Thought vs Union of India enhanced the age limit from 15 years to 18 to bring it in conformity with The Protection of Children from Sexual Offences, 2012 and Child Marriage Prohibition Act, 2005. After this judgment, the consent of a girl below 18 years will bear no relevancy and sexual intercourse with her, whether married or not, would necessarily mean rape even if she had given her consent.

It is pertinent to note that this exemption from the charge of rape of a married woman by her spouse or, more specifically, by her husband owes its origin to the Victorian concept. This exemption was propounded by Lord Chief Justice Hale in the 18th century when he stated that “the husband cannot be guilty of rape committed by himself upon his lawful wife, for by their mutual matrimonial concept and contract that the wife has given up herself in this kind unto her husband which she cannot retract”. This is also known as Hale’s principle. As per this concept of morality, a woman was considered the property of her father before marriage and after marriage, of her husband. It appears that this concept recognises and attaches only proprietary characteristics to a woman by completely ignoring her humane existence.

This principle seems and sounds terrible in present times and came under harsh criticism. Finally, in 1992, the UK changed the concept of marital rape through Regina (Respondent) and R (appellant). In this case, the Court convicted a husband for attempting to rape his wife. On an appeal, the Appellate Court also upheld the conviction. To quote Lord Justice-General Lord Emsmile: “Nowadays, it cannot seriously be maintained that by marriage, a wife submits herself irrevocably to sexual intercourse in all circumstances.”

Also Read: The US Supreme Court’s Moment of Truth

Unfortunately, Indian society still does not hold a husband’s forceful sexual intercourse with his wife above 18 years as rape unless it comes under the purview of Section 376B IPC. Several civil and common law countries have done away with this principle and its consequential marital rape exemption. The basic logic for developed countries doing away with the practice is that women are not considered as chattel or property of their husbands anymore. In this era of gender equality and human dignity, the institution of marriage is regarded as companionship, not ownership.

A horrific incident in India exemplifies the state of excruciation of a victim wife when there is a vacuum in existing legislation and laws. In Maharashtra, a woman complained that her husband had sexual intercourse with her against her will a month after her wedding and she suffered paralysis because of that act. The judge noted that the issue of forced sex does not stand legal ground. The judge observed:

“It is very unfortunate that the young girl suffered paralysis. However, the husband the applicants in this case (husband and family) cannot be held responsible for the same.”

Recently, the issue of marital rape came into the limelight due to the hearings in RIT Foundation vs A Union of India before the Delhi High Court. The marital rape issue attracts considerable constitutional provisions. It attracts Article 14, Article 19(1) (a) and Article 21 of the Constitution. It intrudes into the equality concept. The non-criminalisation of marital rape promotes inequality between a married man and a married woman as it invites stereotypical gender-based roles in matrimonial conjugation. The non-criminalisation of matrimonial rape also intrudes in the actual realisation of Article 21 and Article 19 (1)(a) as it hinders the execution of a wife’s sexual autonomy and dignity with regard to her own body. Also, it results in harming her right to live with dignity, which is part and parcel of Article 21.

Also Read: Another Take on Education

However, the right to privacy which is quintessential in matrimonial bindings between a wife and her husband does not supersede the right to privacy guaranteed to an individual under the Constitution. In the landmark judgment Justice KS Puttaswamy vs Union of India, 2017, the Supreme Court observed that the right to privacy is protected as a fundamental right under Articles 14, 19, and 21. In addition to this landmark judgment, the arguments advanced by some counsels in RIT and AIDWA before the High Court while citing the Puttaswamy case that “privacy must not be a cover to conceal patriarchal mindsets” seconds the view of criminalisation of marital rape.

There also exists the probability of its misuse by some women. This will strike at the very root of the institution of marriage and, eventually, men may become prey to the machinations of crooked minds. It is rightly said that when we talk about preserving women’s dignity, we should also talk about protecting the dignity of men against false accusations and prosecutions. The Constitution doesn’t discriminate based on gender.

Without having specific legislation on the burning issue, the victim can only come to court by pleading cruelty or filing a divorce, but she cannot proceed with rape. On the other hand, by various judgments, the Supreme Court observed that if a spouse refuses to have sex with the partner for a prolonged period without any sufficient reason, it would be tantamount to cruelty. This will serve as a ground for divorce.

Given this situation, there is a need to adopt a balanced approach in this matter. The presumption should favour the wife, on alignment with Section 114A of the Indian Evidence Act, 1872. An exemption clause should be attached to Section 54 of the Indian Evidence Act, suggesting that in case of a marital rape allegation, the previous character of the accused will also bear compelling relevance. This is even when the good character has not been pleaded in defence, as the nature of the crime, i.e. marital rape, is highly confidential and only circumstantial evidence will lead to the truth.

The exemption clause provided with Section 375 IPC regarding marital rape must be deleted from the text. Following the trend set up by South African legislation, it is proposed that punishment for marital rape should be identified as provided for rape in the existing IPC. However, being concerned with the possibility of laws being misused by a section of society, it can be asserted that IPC, through various provisions, put forth punishment for false charges under Sections 182, 191, and 211 IPC.

The judge and lawyers dealing with these cases should be sympathetic, apart from putting their intellect and knowledge, while deciding the issue. The primary purpose of criminalisation of marital rape should be to end the patriarchal concept of ownership of the husband of his wife and promote marriage as an institution of companionship.

It is time to remember the thought-provoking words of Justice Dipak Misra in Joseph Shine’s case in 2018: “The civility of a civilization earns warmth and respect when it respects more the individuality of a woman. The said concept gets a further accent when a woman is treated with the real spirit of equality with a man. Any system treating a woman with indignity, inequity and inequality or discrimination invites the wrath of the Constitution. Any provision that might have, a few decades back, got the stamp of serene approval may have to meet its epitaph with the efflux of time and growing constitutional precepts and progressive perception. A woman cannot be asked to think as a man or as to how society desires. Such a thought is abominable, for it slaughters her core identity. And, it is time to say that a husband is not the master. Equality is the governing parameter. All historical perceptions should evaporate, and their obituaries be written.”

—The writer is an LL.M. student, University of North Bengal