In a disturbing trend, the police is seen as working at the behest of political masters, leading to the arrest of innocent people and muscle-flexing. There is a need for operational independence to ensure an efficient police force. 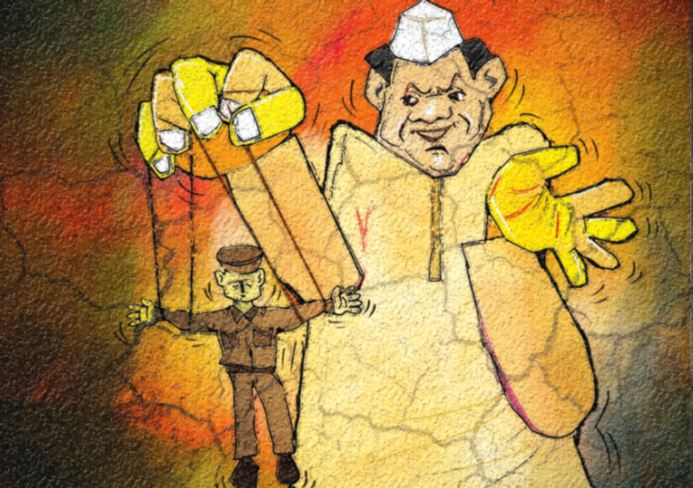 The word police is derived from the Greek word polis, which means city. It was used as politia in the Latin language, which means civil administration. Basically, the dictionary meaning of police is, the civil force of a state, responsible for the prevention and detection of crime and maintenance of public order. The police is the most ubiquitous organisation of society and is expected to be the most accessible, interactive and dynamic organisation. They play twin roles in society—maintaining law and order.

Any police official must have qualities like humanity, integrity, professionalism and courage. It must work fairly with the right approach and its main aim is to ensure safety of the public at large.

However, in a disturbing trend, this organisation is often misused by ruling parties to score their own goals and the police ends up working under the influence of these parties. When the police and politicians scratch each other’s back, citizens always suffer. Every democratic nation is expected to have an independent police machinery and not tolerate any political interference. Unfortunately, this expectation is belied in most nations, including India.

In the present era, no political party in power will give up its grip on the police and this is being misused on selected individuals or segments that are not in favour of the rulers. Misuse of power to settle personal scores with political rivals is nothing new. However, this trend is on the highest curve in recent times. Every political party which had formed a government in any state or centre is guilty of vendetta politics. There are several instances of high voltage political drama and each time, ruling parties have misused the police machinery, which takes the oath to uphold constitutional values and safeguard the public.

Take the Sushant Singh Rajput case. The actor was found dead in his Mumbai apartment on June 14, 2020. There were many rumours and versions of this incident and suddenly, the country witnessed a face-off between the Maharashtra and Bihar police and the matter was taken to the Supreme Court. An IPS officer from Bihar was quarantined by Maharashtra authorities and there were allegations of unfair enquiry by it.

Again, the harassment of an independent MLA from Gujarat, Jignesh Mevani, by the Assam government is another example of political rivalry.

Further, the recent action of the Maharashtra police in the case of MP-MLA couple, Navneet Rana and Amit Rana, is nothing, but blatant abuse of power. Previously, the police had arrested Narayan Rane, minister of MSME, in (a case of controversial remarks against Maharashtra CM) one such case.

The same attitude is now being shown by the Punjab police wherein a new political party has formed the government. The Delhi police is under the control of the central government. Therefore, FIRs against critics of ruling party leaders of Delhi are being filed in Punjab and several criminal cases have been registered against some Delhi-based leaders of Opposition parties for tweets against AAP chief Arvind Kejriwal.

Recently, police from three states—Punjab, Haryana and Delhi—worked actively in the arrest of BJP leader Tajinder Pal Singh Bagga. Punjab police personnel reached his residence in Delhi to arrest him, and later on, the Delhi police registered a case of kidnapping, after which the Haryana Police was sent an alert call by the Delhi police. Subsequently, the Haryana police stopped the Punjab police, questioning the arrest made by them. Later on, the leader was handed over to the Delhi police and produced before the magistrate late in the night and released. In the meantime, the Punjab police filed a habeas corpus writ against the Haryana police before the Punjab and Haryana High Court. The very next day, a court in Mohali issued an arrest warrant against the BJP leader, which was later stayed by the High Court till the next date of hearing.

Efforts made by the police of these states would have been appreciated if this alacrity was shown in the arrests of terrorists or to save kidnapped people. But unfortunately, this all was happening at the behest of political parties.

A survey conducted across 21 states by NGO Common Cause and Lokniti-CSDS found police officials under stress due to workload, poor lifestyle and deficiency of resources. The survey also reveals that 72% of the population of these states agreed that the police is under political pressure.

If we see the statistical data published in Crime in India 2020 Volume-I of National Crime Records Bureau, Ministry of Home Affairs, a completely different version of the police forces is reflected. In India, the charge sheeting rate in kidnapping and abduction cases was only 37.3% in 2020. A clearer picture emerges in the data of IPC crimes (state/UT-wise) 2018-2020.

If police forces had performed their duties without any political pressure, society would not have witnessed several riots. There is excessive political control over police forces. No doubt, the police is capable of doing its business, but it is not able to perform in the true spirit because of political interference by ruling parties.

While hearing a petition of a Chhattisgarh police officer who was suspended and charged with sedition, a Supreme Court bench led by Chief Justice of India NV Ramana said that it was a disturbing trend in the country that police officers’ side with the ruling party. A police force has to be accountable but to the law and law alone. The Supreme Court laid down in the Prakash Singh case: “The commitment, devotion and accountability of the police has to be only to the Rule of Law. The supervision and control has to be such that it ensures that the police serve the people without any regard, whatsoever, to the status and position of any person while investigating a crime or taking preventive measures.”

There is a dire need for operational independence to ensure an efficient police force. The transfer of officers is ordered on the basis of lobbying or pat­ronage, resulting in a mockery of the police organisation. In the current situation, long overdue reforms are essential to ensure fair justice delivery to the public.

Police personnel must also be provided with adequate training and academic sessions to know the provisions and precedents applicable in their states/UTs. It is high time to remove political interference over the police. Control of the ruling party over these forces should be supervisory. Due process of law must be followed by the police force and not the process uttered by the political parties.

—The writer is a legal consultant based in Chandigarh.