Pushed into the Quicksand

The reluctance of the executive to appoint judges to tribunals is shocking and distressing. The executive should concentrate on running the country instead of obstructing judicial matters and disobeying the Supreme Court’s directions. 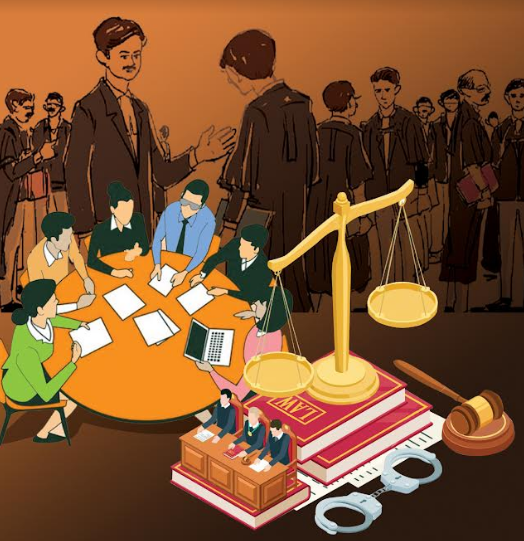 Judges use pens, not harsh words unless to drive home a point to an unrepentant, obstinate, unresponsive and defiant executive. The chief justice has expressed his displeasure as 250 vacancies in various tribunals have made them dysfunctional as judicial bodies. One need not go into the gross inefficiency and incompetence of the law department. It would suffice if the background of the tribunal justice system and its importance is presented to readers.

Tribunals are for delivering justice to the ordinary and not-so-ordinary citizens who want answers to questions they face in everyday life when confronted with public authorities of different shades and hues. Simple questions like high water or electricity bills, lack of street lights and civic amenities, insecurity in their neighborhood caused by rising crime and poor public transport are some of the mundane matters everyone faces. There could be some complicated questions about tax liability, compensation for property acquired, protection of lands from environmental degradation and myriad other legal issues. On one side stands the citizen, and on the other, the mighty, all-powerful State.

Justice seekers also face injustice in the conduct of their business or during the course of employment in the public or private sector or in government service. All that they require is a proper hearing by the decision-makers and a speaking order affecting their rights, and at least one mandatory appeal to bring matters to a close. This is the fundamental requirement of administrative law, recognised the world over as a standard practice, but we in India are reluctant to give our citizens their due rights. Earlier, we were under a colonial administration, but after 1950, we are under a Constitution which the People of India gave to themselves. But the mindset of the administration is still colonial, even in the 75th year of Independence.

Ordinary trials run at a slow pace, in spite of clear-cut directions in both the respective procedure codes for day-to-day trials. Parties often approach High Courts in appeals and revisions for various types of relief. But on the civil side, jurisdictions of civil courts are specifically barred by law if the matter is within the jurisdiction of a particular tribunal.

Therefore, citizens can take their grievances only to the concerned tribunals and wait a long time for a decision. Is their agony ever going to end? Ultimately, justice seekers shall have to take recourse to remedies under Articles 32, 136, 226 or 227 of the Constitution. This puts a huge burden on our constitutional courts. A private member’s bill has been moved in the Rajya Sabha to amend the Constitution to introduce regional benches of the Supreme Court for hearing only appeals. This shall be a good way forward to decongest the jurisdiction of the Supreme Court. Developing a strong administrative law system is another way to ease the work load before the apex court, but administrative law has got stuck in the quicksand of bureaucratic delays in filling vacant posts.

The Constitution 42nd Amendment introduced during the Emergency brought into effect recommendations of the Swaran Singh Committee regarding setting up of tribunals, and Articles 323A (administrative tribunals) and 323B (tribunals for other matters) came into existence.

Since we don’t have a systematic plan for administrative tribunals and have never understood their importance and relevance, an unusual provision was introduced. This ousted the constitutional jurisdiction of the Supreme Court and High Courts under Articles 32 and 226 on the specious ground that tribunals were their substitutes. Thus began constitutional jousting which has been going on for 36 years. The Supreme Court has been developing jurisprudence on subjects relating to administrative law as matters of constitutional importance, telling the executive what the law is, but judgments of the Court have had no effect on the executive. The list of these cases is endless. It is a great pity because a lot of judicial time is taken up with matters which would have been otherwise dealt with and finally disposed of by the concerned tribunal.

Administrative law is the branch of law which deals with tribunals which were created to provide answers, resolve disputes and determine liabilities. In other words, to deliver justice to the citizens when they are cornered by some executive authority or the other. All or almost all cases before tribunals concern some government department or the other. Only occasionally are some private individuals or organisations arrayed as defendants.

All tribunals are constituted under some statute. The persons who sit on these tribunals are judges or lawyers or persons with special expertise in the subject matter of the tribunal. No one can approach a tribunal unless there is an administrative decision or order which the party wishes to challenge before the tribunal.

British jurist Prof AV Dicey is said to have famously remarked: “In England, we know nothing about administrative law and we wish to know nothing about it.” On the contrary, Prof. FW Maitland replied: “If you take up  a modern volume of the reports of the Queen’s Bench Division, you will find that about  half of the cases reported have to do with rules of administrative law.”

The common law/civil law dichotomy which existed in the late 19th and early 20th century has blurred. Civil law had given birth to administrative law which has now been adopted the world over. It’s very unfortunate that Indian administrators do not give proper advice on running the tribunals which are constitutionally ordained judicial tribunals.

By international standards of administrative law, our constitutional law is well-equipped to deliver administrative justice, all across the board. Our law reports and commentaries on constitutional law are outstanding, and our jurisprudence very well-developed. The Supreme Court has given all the answers to difficult questions. It is the reluctance of the executive to appoint judges to sit on tribunals to make them start functioning which is shocking, distressing and disappointing. Whatever needs to be said has been said in a long line of cases; it is now time for quick and decisive action by the executive.

As this writer has experience of sitting on UN Appeals Tribunal, it may be of some interest for readers to know how and why it was set up. Till 2008, there was no system of administrative justice for the UN staff about their employment related matters such as  promotion, denial of pension and other allowances, wrongful dismissal, unfair rejection  for a post, etc.

From the time of inception of the United Nations in 1945, employment related issues of UN staff members were subjected to a peer review body. This was known as the UN Administrative Tribunal, but it could only make non-binding recommendations. The first president of  this body was not a judge at all, but a diplomat and an Indian prince, Maharaja Sir Digvijaysinhji, Jam Saheb of Nawanagar. He had a distinguished career in the British Army, rose to be major-general, remained Chairman of the Chamber of Princes and a member of the Imperial War Cabinet. Jam Saheb was also one of our greatest philanthropists. From 1942-46, he took care of about 1,000 Polish children, orphaned by the war, sheltered and educated them until the war was over and then arranged for them to be sent to various countries for adoption.

As UN agencies and programmes grew in number and the staff expanded, the administrative issues became complicated. The clamour for a system of justice manned by judges grew. In 2004, some members of the UN staff were indicted for corruption in the oil-for-food scam in Iraq. As the United Nations enjoys complete immunity from judicial process of any national jurisdiction, the indicted persons had no court to turn to for relief to challenge the findings. This was when the UN General Assembly realised the need for delivering justice to their staff.

To achieve this end, a Redesign Panel recommended a first instance full-time UN Disputes Tribunal and a part-time UN Appeals Tribunal, both to function under their own statutes passed by the General Assembly and to be manned by internationally recruited judges selected by a newly created Internal Justice Council. And finally, the judges for the two tribunals were elected by the General Assembly, where member states cast their votes. It was ensured that a certain amount of gender balance was maintained and geographic diversity respected.

There is still time to retrieve the situation and restore a proper balance between the judiciary and the executive if the latter realises that tribunals are a part of our judicial architecture. It is not the job of the executive to select judges, but simply to issue appointment orders after the selections have been made and provide court rooms and infrastructure to the tribunals for their effective functioning. The executive must step down from its ivory tower and concentrate on the task of running this vast country instead of dabbling in judicial matters about which it has neither knowledge nor experience.