Tanishq ad controversy: Addition of secular in preamble has left it a tokenism 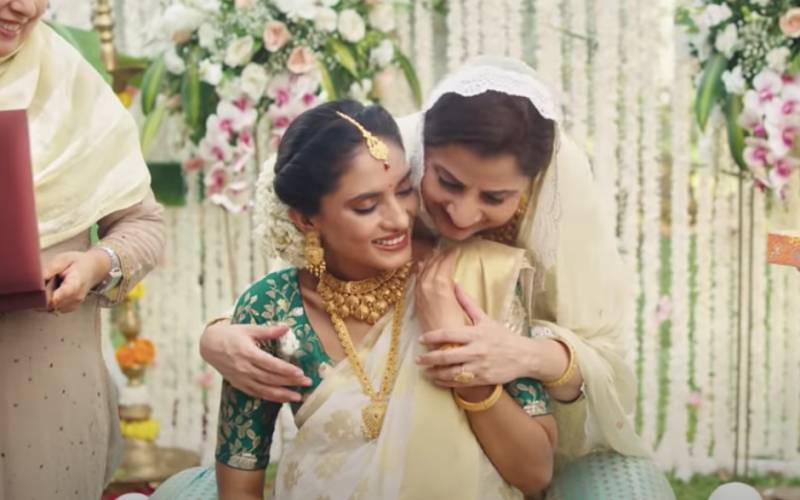 Declaring India to be “secular” in the Preamble has often had the opposite effect as can be seen from the rude and insensitive behaviour towards the elegant Tanishq ad and has added to growing intolerance.

The child arrived in Mussoorie from Lahore, five weeks late for his tryst with destiny. But not too late to earn Salman Rushdie’s well known epithet. How does it really seem so many years after Independence? One cannot but have mixed feelings of joy and disappointment. Things began to go wrong in the late 1960s, though not so horribly wrong that one would lament those years. The political battles raged between the old guard and young turks. Much has been said about those years, about experiments with socialism. Maybe the move to the left of the centre was a good one. If only the outcomes were fair, the poor really got looked after, there were jobs, housing for all and good quality education and casteism was vanquished. This never happened, but a movement did start against corruption and there was an unfavourable court verdict, protests engulfed the political space and the hateful Emergency engulfed us all.

During this time, India also became secular or nearly so. Every vibrant republic, it must be said, is always secular in the best sense of the word, only sometimes the term itself is misunderstood and, therefore, misused. Where was the need to admit that India had not been “secular” all these years, and demonstrate this to the people and the world by adding this very republican value in the Preamble? The same goes with the introduction of “socialism” and “integrity of the Nation”. Strangely, “socialist” and “secular” came immediately after “sovereign” and relegated “democratic” to the fourth place.

Independence was achieved by dividing India on religious lines: Muslims on one side, Hindus and Sikhs on the other. Quite unnecessary, one could say, as millions of men, women and children were butchered. After this, we struggled hard to build a nation on modern republican lines. The progress was slow, but there was a certain pride in nation building. Dams, steel plants and fertiliser factories began to spring up. The monsoon war of 1965 and the peace that was signed in January 1966 made us all proud, but so sad when the coiner of “Jai Jawan, Jai Jawan” suddenly passed away.

Emergency saw the locking up of opposition leaders by the dozen under the worst type of senseless authoritarianism. To show the people fulfillment of promises, the 42nd constitutional amendment was done. A wag wondered if it was akin to Vicks Formula 44, a popular cough syrup of those days. The amendment went through in January 1977. Soon Emergency was lifted, opposition leaders released. But they came back to form the government at the centre, ruling from March 1977 to January 1980.

Readers may wonder what all this has to do with the introduction of secularism in the Preamble during the Emergency. We were never a theocracy before this, and Nehruvian socialism was rife. But something had to be done to make India truly secular. Intelligent people find this funny, sycophants call it high-grade statesmanship. Declaring India to be additionally secular as well had the opposite effect. This is when things in public life started to go wrong for the wrong reasons. Elections began to be fought on religious and caste lines. Forty years hence, issue based politics has given way to an age of intolerance.

Has intolerance become extreme? The Tanishq ad is a case in point. An elegant advertisement, conveying a simple message for a jewellery brand, was withdrawn after people protested. In the video, a Tanishq necklace is gifted by a Muslim lady to her Hindu daughter-in-law at her baby shower. One may or may not accept inter faith marriages. This is an individual family’s view. But who a woman marries is her personal choice. Some parents are conservative and will not accept an out of caste husband for their daughter or a boy of a different religion. But there have been so many such marriages from different parts of India and the world, all enjoying happy matrimony.

Rude, vulgar and insensitive behaviour towards others is not punished because the authorities take cover under the all encompassing statement: we are secular. In other words, they do nothing. No one stands up to protest or object against the bad behaviour, but they make secularism their refrain. Therefore, it is a good idea to delete “secular” from the Preamble altogether and remove it for all time to come. In its place, we should practise real tolerance and respect all religions, just as Swami Vivekananda had reminded the World’s Parliament of Religions in 1893 in his address to “Sisters & Brothers of America”.

Deleting “secular” from the text shall make no difference to the strong secular provisions of the Constitution. France, a Catholic country, espouses laicity in government functioning. During the French Revolution, the battle cry was liberty, equality and fraternity, and Jews were proudly treated as equal citizens. This is the French motto till today. In 1894, Captain Alfred Dreyfus of Jewish ancestry got wrongly convicted for treason and served 10 years. The Dreyfus case divided the French between Dreyfus supporters (Jews and republicans) and Dreyfus opposers (army and the Church). When Dreyfus was pardoned and reinstated, laicity was introduced in France as a result of this sad event. Even so, France never attempted to add laicity in her motto. But we, for no rhyme or reason, added secular in our Preamble, as if to fill a gap in our Constitution.

India was secular between January 2, 1950 and January 2, 1977, without the mention of “secular” in the Constitution. We have no official religion, every citizen has the right to practise the religion of his choice and the State does not discriminate on the grounds of religion. The original copy of the Constitution has illustrations from the entire sweep of our long history and proud heritage, from Vedic times to Independence. In between are drawings of Lord Rama, Lord Krishna, Lord Buddha, Lord Mahavira, Emperors Ashoka and Akbar, Mahatma Gandhi and Subhas Chandra Bose. Justice, liberty, equality and fraternity are national values which have a certain timelessness about them. This is what the struggle for independence was about and every citizen has a duty to promote these values.

Returning to rude, vulgar, insensitive behaviour of people over the Tanishq ad, we need to remind ourselves that the Preamble also speaks of fraternity, assuring the dignity of the individual. The place to look for tolerance is not in principles of secularism, but in the spirit of brotherhood or fraternity, making everyone feel a sense of belonging to India as equal citizens. We have this sense of national brotherhood in a very distinct part of the original Preamble.

Along with fraternity between individuals, we also promote unity of the Nation. But here again, integrity (of the Nation) was inexplicably introduced in the Preamble by the 42nd amendment. How fraternity relates to territorial integrity is unfathomable. The two are different values, important in their own field, but taken together they dilute each other. The Preamble should have been left alone as all amendments to it are superfluous. The midnight’s child does not understand this pseudo secularism and fake nationalism. Our Constitution protects the People of India. Nothing more need be said.