There are numerous parallels between the Senate Select Committee to Investigate Campaign Practices from the 1972 presidential election involving Richard Nixon and the current situation related to former president Donald Trump. But it is mystifying to see the latter making diehard attempts to run for election again in 2024. 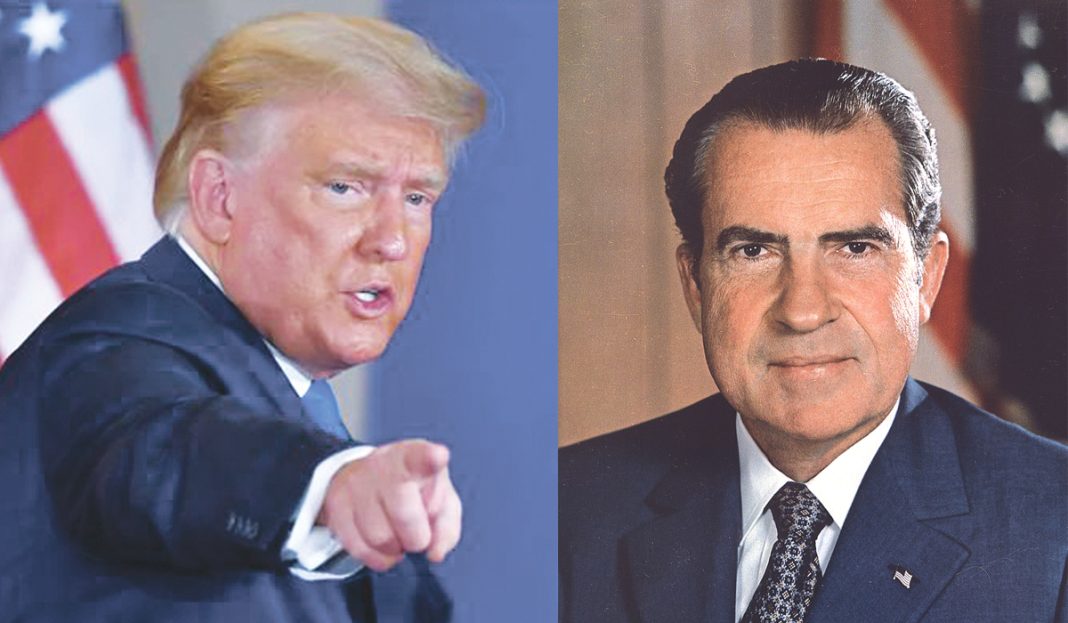 Many Americans old enough to remember the Watergate burglary hearings that led dramatically to then President Richard Nixon’s resignation in 1974 are mystified how former President Donald Trump admits to involvement in events far more illegal than Nixon, and yet intends to run for election again in 2024.

Trump’s performance at a rally in Texas was crystal clear that he saw re-election as a means of vengeance against people in both political parties who deny his notion of a rigged election. Additionally he vowed to pardon insurrectionists.

“If I run and if I win, we will treat those people from January 6th fairly,” he added, “and if it requires pardons, we will give them pardons, because they are being treated so unfairly.” His refusal to admit defeat has become the central focus of his return to office and promises to the faithful are easy to make now.

Lawyers will have plenty to do regardless of what Trump decides about the insurrectionists was well as his defending his government officials if any are indicted.

There are numerous parallels between the Senate Select Committee to Investigate Campaign Practices, also known as the Senate Watergate Committee, from the 1972 presidential election and the current situation. Senator Sam Ervin, a Democrat from North Carolina, was the chairman. Viewed as a rational conservative, he was both a believer in segregation and in civil liberties, apparently not a contradiction to Ervin. President Nixon is said to believe that Ervin might be supportive, but he was not.

Republicans on the Committee and several witnesses defended Nixon, who was popular having won re-election overwhelmingly. But when John Dean testified, the mood changed. Dean, a lawyer, was White House Counsel. It is important to remember that politics in America 50 years ago was contentious but not with the open hatred that has become common place in the age of social networking.

The internet and mobile telephones changed the 21st century in India and everywhere. American political dissonance reflects it. The two terms served by Barack Obama as the first African-American president heartened a large segment of the nation but hardened those who believed that white Christian Americans deserved to be in control of the nation their “ancestors” had emigrated to and founded 200 years earlier. While the USA has always been a nation of immigrants, pearlier generations often think of themselves as “better” than the newest immigrants.

These sentiments were amplified by the Trump election campaign with the added dimension of a woman, Hillary Clinton, as the other candidate. The fabled businessman won, but turned out to be more fable than anything else.

Nixon, on he other hand, was respected as an experienced politician with White House experience as vice president. Dean’s testimony included a 245-page statement to the committee that was devastating. He admitted to obstructing justice while serving as White House counsel, encouraging perjured testimony, laundering money, and committing other misconduct. He said he told President Nixon “there was a cancer growing on the presidency” that needed to be removed. Recounting six conversations with President Nixon, Dean indicated that the president was aware of, or even involved in, the Watergate cover-up. This was the first witness to make that allegation. He submitted about 50 documents as supporting evidence.

Nixon’s support among Congressional Republicans dissolved after revelations that he tried to get the CIA to block the FBI’s investigation into Watergate. Referred to as the “smoking gun” in the case, dozens of Republicans and conservative Democrats turned against him. He resigned days later on August 8, left the White House on the 9th and retreated to San Clemente, California. (Allow me a personal note: my first child was born on the 8/9/74 so I split my time between the hospital and the newsroom.) Gerald Ford, who had been appointed vice president became president when Spiro Agnew resigned. Agnew was facing prison for criminal tax avoidance but plea bargained a resignation instead. Nixon died nearly ten years later of a stroke.

Voters were less kind. The 45th president lost an election and despite his Big Lie complaints of fraud, not one court has found any evidence that would change the outcome. Trump was unpopular outside his hard core of noisy supporters. Voters showed that, often backing Republicans on the ballot for other offices, while not giving a crucial vote to Trump.

Documents that were turned over to the House Special Committee reveal that Trump had not one but two executive orders prepared to enable his loyalists to seize voting machines after the 2020 election. The Pentagon request was not formalized and a second considered for the Department of Homeland Security was rejected when Trump’s lawyer Rudy Giuliani asked if they would do it. The New York Times reported that Trump was directly involved in the plans to seize the machines. The authors talked to “people familiar with the matter [who] were briefed on the events by participants or had firsthand knowledge of them.” That latter description is interesting: someone in Trump’s inner circle is talking to reporters. However, the shape of the different elements in the story suggests that person is not necessarily giving an accurate account.

What is clear is that none of this behaviour seems to upset the Republican Party. I asked a longtime friend who is a dedicated conservative and involved in party organizations why Republicans campaign almost exclusively on race and identity. He said: “The Republicans have one dogma. Power and money and money and power. He who controls WINS.”

Trump tried to use government agencies to overturn a legal election that he lost. His party shrugs, in stark contrast to events nearly 50 years ago with Nixon. The party faithful consider him the frontrunner for the nomination in 2024. If he is unable to accept or get the nomination it won’t be because the GOP accepted justice.

At rallies, in emails seeking campaign contributions, in favourable media, Trump continues to defend himself, as he has done for most of his career, by blaming someone else.

His own legal situation is precarious and he attacked prosecutors in three cases. Two New York State cases are based on forensic evidence that his financial accounts were falsified to look larger to obtain preferential loan treatment. Then falsified to be much lower to save on income taxes. A third case involves his request to have the Georgia Secretary of State “find” 11,000 votes so he would win Georgia, even though re­counts showed he had lost to Joe Biden.

Curiously, Trump released a statement blasting the Georgia investigation and complaining that he is being investigated for “asking an Attorney General…to look for corruption”. But, so far as we know, he was being investigated for pressuring Georgia’s secretary of state. They are two different positions, two different men. Was Trump just confused when he issued the written statement, or was there another conversation? Could it be a coincidence that all the legal cases are prosecuted by African-American lawyers?

At the rally in the Houston suburb of Conroe, Texas, he told followers that he may need them to “organise the biggest protest we have ever had” if federal prosecutors in Washington or in New York and Atlanta, where cases against him are moving forward, “do anything wrong or illegal”. He then called the federal prosecutors “vicious horrible people” who are “not after me, they are after you”.

Instead of bashing President Joe Biden for his handling of, well anything, Trump spent several days dangling pardons for capitol attackers, then admitting his goal was to have “overturned the election” and then calling on the House to investigate Pence for not throwing out votes of multiple states so Trump could keep power. Quite different from Trump portrayed as sort of passive in all this, simply receiving proposals from his advisors and friends but not directing any of the action.

It was never particularly believable except to the extent that he played the role of the mob boss whose lieutenants know what to do. Fortunately for the country, as Salon’s Amanda Marcotte points out, Trump was saved by his lackeys and accomplices, either because they were too inept to carry out the coup or because even they had reached the end of the line with his lunacy.

Robert Reich, who is an economics professor and was labour secretary in the Obama administration wrote in The Guardian that, “if Trump keeps at it—and of course he will—he will help the Democrats in the upcoming mid-term elections by reminding the public of the attempted coup he and his Republican co-conspirators tried to pull off between the 2020 election and January 6. That would make the mid-term election less of a referendum on Biden than on the Republican party.” (“Don’t get me wrong,” he said. “I think Biden is doing a good job, given the hand he was dealt. But Republicans are doing an even better job battering him—as his sinking poll numbers show.”).

Did you find apk for android? You can find new Free Android Games and apps.
Share
Facebook
Twitter
Pinterest
WhatsApp
Previous articleMadhya Pradesh High Court disposes of PIL on land sale for lacking bona fide
Next articleAllahabad High Court quashes plea regarding appointment of Principal to Inter College, says once a selected candidate joins, the selection process is over