Close on the heels of the Vyapam scam, the state has been hit by another controversy as candidates who have not appeared for a National Institute of Open Schooling exam have been shown as passed

In Madhya Pradesh, a state already tainted by the Vyapam scam, over 1,000 candidates have passed the Class X and XII exams without appearing for them. In 2017, over two lakh candidates appeared for the secondary and senior secondary-level examinations held in March-April by the National Institute of Open Schooling (NIOS). The results were declared in May-June. Soon after, allegations surfaced about massive bungling in the exams.

A committee of experts was formed in June to probe this scam. Based on its findings, the Institute has written to the Ministry of Human Resource Development (HRD) seeking an investigation by “vigilance agencies” into the irregularities. NIOS, incidentally, is the largest Open School Board in the world and works under the HRD Ministry.

According to the expert committee’s probe, large-scale impersonation has taken place in the exams in connivance with the accredited institutes of NIOS and examination centres, which are now being investigated. There are approximately 60 exam centres of NIOS in Madhya Pradesh and cases of impersonation were found in three of them.

NIOS chairman Chandra B Sharma reportedly said that on August 22, he had recommended a detailed investigation into serious irregularities found across NIOS examination centres in Ratlam, Umaria and Sehore, three districts in MP. The Board has withdrawn the results of over 1,000 students on suspicion of having skipped the examination.

“We wanted a fair inquiry, which is why the committee members were not from within the NIOS system. They submitted their findings about 20 days ago, based on which I have recommended a proper investigation,” said Sharma. Prompted by Sharma’s letter, the HRD ministry has approached the CBI to probe alleged irregularities in the NIOS exams. It is unclear if it will accept the ministry’s request. The Board has also decided to step up security measures during examinations such as biometric authentication and by installing CCTV cameras at exam centres.

“Only those centres will be taken up as an exam centre that have the facility of CCTV cameras (except in the case of Kendriya Vidyalyas and Jawahar Navodaya Vidyalayas). We are also in touch with the IT ministry’s Common Service Centres scheme so that we can use the biometric attendance system,” said a senior official. This is likely to be introduced in the exams to be held in September.

Meanwhile, the Aam Aadmi Party in a press conference here on September 8 alleged that as many as 1,200 candidates were absent on the day of the exam and yet, when the results came out, all had cleared it.

Documents shared by AAP’s state convenor Alok Agarwal, show that all 693 students who were to appear for the exam at Kendriya Vidyalaya, Sagod, had passed, when, in fact, only 19 had appeared for it. 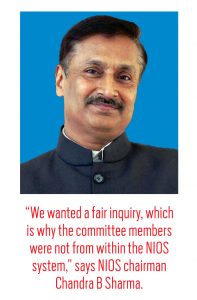 In Jawahar Navodaya Vidyalaya, Sehore and Navodaya Vidyalaya, Umaria, 351 and 175 candidates respectively were absent on the day of exam but all were declared passed. AAP has sought an SIT probe into the irregularities at all NIOS centres in the state.

An investigation conducted by a news agency revealed an acute lack of local monitoring and accountability in NIOS study and exam centres in Madhya Pradesh. They also enrolled students from far-off cities such as Delhi and Patna.

According to the news agency, the exam centres claimed they were only responsible for holding exams.

Study centres too passed the buck, saying they are only responsible for holding contact classes as exams were conducted elsewhere and students were enrolled online.

“We are only concerned with contact classes and have no further control over either exams or results,” said JP Shukla, one of the administrators from the NIOS Ratlam study centre, to News18. On being asked about the attendance goof-up, Vibhu Vajpayee, exam centre in-charge of NIOS, Sehore, told the channel that they were only concerned with holding exams and sending attendance and answer sheets to NIOS headquarters. Similarly, the Umaria exam centre in-charge, SP Dubey, claimed that they only held exams and forwarded the attendance sheets to NIOS.

Meanwhile, several study centres on condition of anonymity, claimed that while any student enrolling with NIOS has to furnish a rent agreement to prove local residential status, a large number produce fake documents and no one verifies them physically. “We seldom hold contact classes as we don’t get paid for this,” said the owner of one of the study centres.

It is obvious that the lack of probity on the part of all stakeholders has led the state’s education system to this sad impasse.