India was shocked at the strong reaction from heads of mission of African states after the recent attack on Nigerian students in Greater Noida. Refusing to hide under diplomatic niceties, they dubbed the attacks as “racist and xenophobic”. They even said the attacks were not sufficiently condemned by Indian authorities and they would call for an independent investigation by the UN Human Rights Council in Geneva and report the issue to the African Union Commission.

The racist and xenophobic slur was rejected by the Indian government. External Affairs Minister Sushma Swaraj said in parliament: “It’s not right to connect this with racism before the probe ends. I said this in the context of attacks in US too.” Her reference to the US was because most commentators, siding with the Nigerians, had spoken of the reaction when Indian students were attacked in the US. In fact, India-Australia ties went through a turbulent period when there was a series of racist attacks on desi students Down Under. She was also upset about the statement that “no known, sufficient and visible deterring measures were taken by the government of India”.

“I think the government and local authorities in UP mishandled the situation,” said former foreign secretary Lalit Mansingh. “There was no need for Sushma Swaraj to wait for the probe. It anyway takes ages for the report to come in. Simply admitting that it was a racist attack and India deplores it would have done nicely,’’ he added.

The mob attacks and reaction by heads of African missions has cast a shadow on growing ties between India and Africa and led to recrimination. Off the record, officials have pointed out that Swaraj herself has talked of action against the perpetrators of the violence. She had assured the countries that justice would be done and that she was in touch with UP Chief Minister Yogi Adityanath under whom Greater Noida falls. Six persons were arrested for this violence. Moreover, officials said that many of the chiefs of mission were not aware of the strong language used in the statement put out in their names. 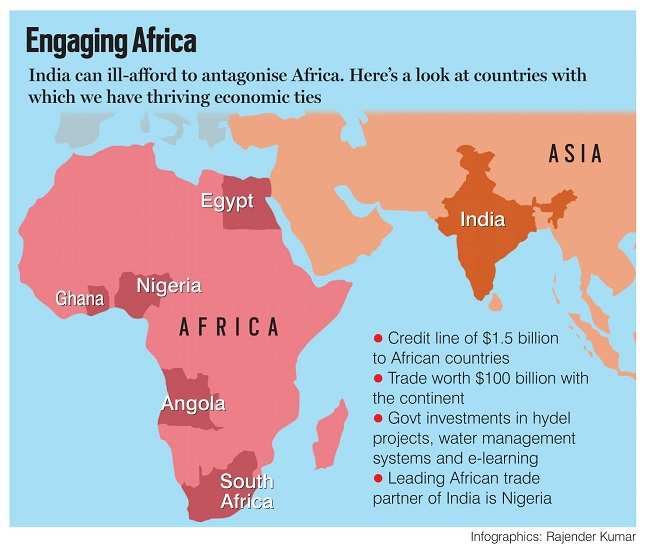 That is a rather facetious argument. Only when heads of missions individually come out and disassociate themselves from the statement will this argument make sense. As long as they don’t, what individuals say behind closed doors is of no consequence.

Trying to divide the African missions is not the answer. After all, the top diplomats are merely reflecting the concerns of their fellow citizens. India reacts with anger every time an Indian national is attacked elsewhere. The African diplomats were doing exactly what any government official will do: champion the cause of its students. However, it is a fact that such strong condemnation is unusual and shows how the recurrent attacks on African students in India have shaken up these nations.

Only a small percentage of African students may be involved in drugs and petty crimes, but an uninformed public is prone to generalise. A senior MEA official, who spoke on condition of anonymity, said: “India is becoming an increasingly violent society. Newspapers are full of stories of violent attacks, not just against Africans but Indians too.” The fact is that minorities, young people from the North-east, Dalits and Scheduled Castes all bear the brunt of vigilante justice.

Add to this new Hindutva groups like “gau rakshaks’’, anti Romeo squads and ultranationalism, and India is seen as an increasingly intolerant nation.

Ajay Dubey, the head of African Studies in JNU, wants stricter action against the perpetrators. “This must change. There should be laws at par with the Schedule Caste, Schedule Tribe Act to respond to crimes against racism.”

Government-to-government relations are just one part of the story, said Ruchita Beri of Institute for Defence Studies and Analyses (IDSA). “People to people contact is just as important. Trade between India and Africa was robust through the centuries. That had nothing to do with governments. It was the traders who dealt with each other and came to know each other’s way of life. That thread should not be broken.”

Young African students studying in India will be the future leaders of their countries. Their views will be coloured by their experience here.

At stake is India’s outreach to the continent, where China has made major strides. Despite Prime Minister Jawaharlal Nehru’s close friendship with Africa during the anti-imperialist struggle and his championing of the anti-apartheid movement, after him, Indira Gandhi and Rajiv, Delhi just had a perfunctory presence in Africa. China, meanwhile, was making strides in the continent with its ever-increasing appetite for oil and minerals to fuel its growth.

India as well as Europe and America woke up to the Chinese challenge rather late. In 2006, leaders from all over Africa were invited to China to showcase the growing relationship between Beijing and this continent. This mega gathering gave the rest of the world a glimpse of China’s influence in Africa.

Other countries too began wooing African states. Manmohan Singh started off with a modest summit in Delhi in 2008, followed by another in Nigeria in 2012. But when Modi held the third India-Africa summit in the capital in 2015, it was a mega affair. All 54 African states were invited and 41 leaders attended it. The follow-up action was equally substantial.

Beri said: “PM Narendra Modi has done much to push India-Africa ties in the last two years. The spate of high-level visits from India last year did much to reassure the Africans who earlier had a constant grouse that despite loud professions of friendship, Indian leaders did not make the effort of travelling to African states. That this incident should happen at this juncture is a pity.’’

In 2016, Modi visited Mozambique, South Africa, Tanzania and Kenya. President Pranab Mukherjee travelled to Ghana, Côte d’Ivoire and Namibia in an attempt to reinvigorate ties. He was the first Indian president to visit Ghana and Côte d’Ivoire. Vice-president Hamid Ansari was in Nigeria and Mali last year, while this year, he travelled to Uganda and Rwanda. Such high-level visits are rare in India-Africa relations.

In the first three months of this year, there were four major visits by African leaders. Yet, the senseless violence against African students has blotted the copy and unless quickly redressed, would lead to a downturn in relations.

India has extended a credit line of $1.5 billion to African countries and invested roughly $40 billion there. Private Indian companies are setting up car manufacturing units there, while the government is involved in hydel projects, water management systems and e-learning there.

The Africa Development Bank meeting is scheduled for later this year. As of now, India’s trade with the continent amounts to over $100 billion and is growing. Ironically, India’s largest trading partner in Africa is Nigeria, with trade between them in 2014-2015 being worth $16.36 billion, followed by South Africa at $11.80 billion.

Among African nations, India imports the most from Nigeria, mostly oil. This is followed by South Africa, Angola, Egypt and Ghana. India exports pharmaceutical items, machinery and vehicles. Last year, India exported $400 million worth of vehicles, parts and accessories to Nigeria, $390 million worth of pharmaceuticals and over $26 million in machinery and appliances. In addition, thousands of Nigerians make yearly trips to India for medical reasons and there is a vibrant telecommunication business chain between the two countries. India’s overall annual trade with the world stood at $310.34 billion in 2014-15, out of which Africa accounted for $32.8 billion, i.e., 10 percent.

Meanwhile, there are murmurs in some quarters about African nations refusing to back India’s bid for membership to an expanded UN Security Council once the reforms set in. The present consensus is for five members to be admitted. The countries in contention are India and Japan from Asia, Germany from Europe, one country from Latin America (India is supporting Brazil) and one African nation. Nigeria and South Africa are in the race for this seat. Egypt is claiming membership to support the Arab world.

“This has to be decided by the African Union, it’s their internal fight and will not affect India’s chances,’’ said Mansingh.

India is hoping that the current crisis would blow over and not affect long-term relations with African nations. “I doubt there will be long-term consequences, but in the short-term, India should use all means to reassure the African countries,’’ said Mansingh.

This may take some time and much hard work. A tweet from Modi would do much more than statements from ministers. A simple “Africans are our brothers” can soothe frayed tempers.