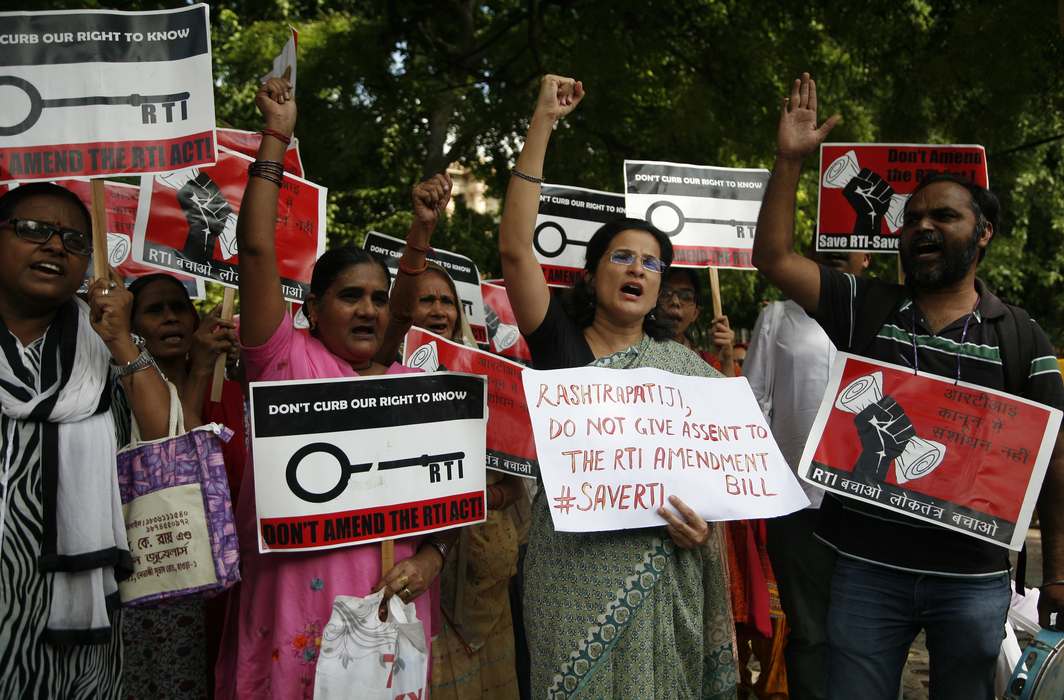 Above: A group of activists protests against amendments in the RTI Act. The Opposition claims that the government is trying to choke the information flow/Photo: Anil Shakya

According to a new government plan, the terms and conditions of the Chief Information Commissioner will be the same as that of the cabinet secretary and lower than the CEC’s. Is this a signal that this post is not high on the priority list?

There is news that the Department of Personnel and Training (DoPT), working directly under the prime minister, is slowly killing the Right to Information Act. In July 2019, Parliament passed a bill to amend Section 13 and Section 16 of the RTI Act to review the terms of Central Information Commissioners (CICs) and State Information Commissioners (SICs). The amendment said that their appointment will be “for such term as may be prescribed by the Central Government,” and that salaries, allowances and other terms of service of the CIC/IC “shall be such as may be prescribed by the Central Government”.

According to the draft rules being framed by the DoPT, the terms and conditions of the CIC, including pay and perks, would be the same as of the cabinet secretary, which is significantly lower than of the Chief Election Commissioner. Those of the central ICs will be similar to those of a secretary to the government. State CICs will draw pay and perks equivalent to that of a secretary (or chief secretary of the state), and ICs of the state may get the pay and perks of additional secretaries to the government. Besides, the CIC and the ICs will have a fixed tenure of only three years as against the five now, which is the same as that of Election Commissioners.

This may also mean that they are likely to be downgraded several notches in the “Table of Precedence” from 9A where the CEC, Comptroller and Auditor-General, and Chairman, UPSC, are placed to position 23 occupied by the secretary to the government. What is worse, from an autonomous and independent statutory institution, Information Commissions will be reduced to one more department doing the bidding of the government in power.

The argument from the government’s side has been that the jobs of ICs have become sinecures for a favoured few and therefore, need not be given much importance. This is indeed true and has been the root cause for the degeneration of the RTI Act and the dismal implementation of its provisions. Most of the Commissioners appointed were of low calibre and products of the spoils system and had no idea of transparency in governance and the key role information plays in achieving this. The functioning of most Information Commissions has become tedious as could be seen from the recent happenings in Karnataka where­in all nine ICs charged the CIC with “misconduct and abuse of power” and wanted him suspended.

The “halal” operation on RTI started soon after the Act was enacted in 2005 after several years of struggle by civil society. This is what the preamble of the Act says: “Whereas democracy requires an informed citizenry and transparency of information which are vital to its functioning and also to contain corruption and to hold Governments and their instrumentalities accountable to the governed.” The objective of the Act was to secure access to information under the control of public authorities in order to promote transparency and accountability. Yet from the very beginning, it was a like-dislike relationship between the government and the people.

Rooted in the colonial years of autocratic governance and secrecy in government, India’s bureaucracy resisted RTI from the start. They felt uncomfortable with the severe dilution of the Official Secrets Act which most of them worshipped. So they started to sabotage the Act from within by packing the Information Commissions with retired bureaucrats and other favourites from different walks of life. With an opportunity for rent-seeking, politicians were elated. In the event, hundreds of hardcore retired bureaucrats who had revered the Official Secrets Act while in office and had toed their political masters’ line became “agents of transparency” and began catering to the needs of an “informed citizenry”.

In 2011, former Prime Minister Manmohan Singh himself joined the chorus against the RTI Act when he took a stand at the sixth annual convention of Information Commissioners in Delhi that “RTI Act needed a critical review”. He was of the view that the Act was adversely affecting the “deliberative process” in the government and the efficiency of officers. He went on to say that the government was being flooded with RTI requests having no bearing on public interest. He said this situation was “undesirable” as it was stretching the limited time and resources available with the government. Further, he said, honest bureaucrats felt discouraged from expressing their views on files as they feared that these would be disclosed in the replies.

Singh’s remarks came against the backdrop of the controversial 2G memo of the finance ministry released by the Prime Minister’s Office following an RTI application. The internal memo had brought P Chidambaram under the scanner in the 2G case and created a deep political crisis in the government.

Singh came under an avalanche of criticism. Aruna Roy, who was the driving force behind the enactment of the RTI Act, countered him when she said: “Any move to dilute the RTI Act will only enforce sanction on public action. It cannot improve efficiency at all.” Incumbent CIC Satyananda Mishra was of the view that some people in the government thought that disclosure under RTI could inhibit their free expression of views. But the overall benefits of RTI will outdo that inhibition. Any dilution of the Act is not good for the country.

Rights activist Medha Patkar put it candidly when she said that the ambit of the RTI Act should actually be widened for the sake of transparency rather than diluting it. According to her, bureaucrats will be scared of writing anything on a file only if they are doing something illegal or favouring a person. Many RTI activists agreed with her.

The BJP also jumped on the bandwagon and criticised Singh and asked whether the government was scared of the Act. BJP spokesperson Rajiv Pratap Rudy said: “The PM says that honest public servants are reluctant to put their views across. Such comments are highly objectionable and run counter to the basic tenets of the RTI Act. The PM seems to suggest that RTI is wastage of time and expenditure. It also appears that the PM is giving strength to the argument extended to exempt certain institutions from the RTI Act.” He further said, “Have the recent exposes on scams made the government turn its back on the RTI?” and proclaimed that “BJP will contest any attempt to dilute the RTI”.

Yet, when the BJP government came to power, it not only diluted but buried the RTI fathoms deep. Why are they doing this? Is it to cover up the acts of corruption and deceit like the Rafale scam, trading of MLAs/MPs, draining the Reserve Bank of India, mounting bank frauds, massive transfer of wealth to the super-rich through predatory projects, severe mismanagement of the economy, illegal electoral bonds and buying/stealing of the people’s mandate?

The process of dismembering the RTI commenced with the CIC’s categorical order in 2013 that political parties would come under the purview of the RTI Act as they are the “building blocks of a constitutional democracy”. The CIC’s ruling was well-reasoned on general, legal and financial grounds. Consequently, the CIC directed these political parties to designate PIOs and Appellate Authorities in a time-bound manner and respond to RTI applications expeditiously. The parties were also directed to comply with the provisions of Section 4(1) (b) of the RTI Act by way of making voluntary disclosures on the subjects mentioned in the said clause. There has been zero compliance by political parties and the matter, challenged in the Supreme Court, is pending. The question is, “Who is Afraid of the RTI Act?”

The core objective of the RTI Act is to empower the people. By burying it, the Modi government would be disempowering the people. What a travesty.