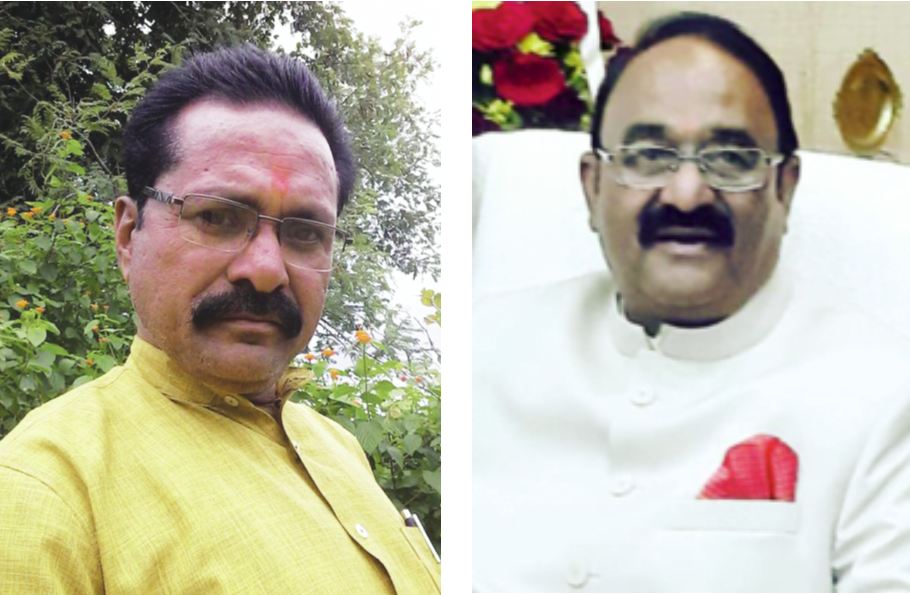 Above: The move of the Speaker NP Prajapati (right) to disqualify BJP MLA Prahlad Lodhi from the assembly is a setback to the party in the state

With the Speaker disqualifying a convicted BJP MLA as per a Supreme Court ruling, the party’s strength has decreased, leading to a constitutional impasse

Madhya Pradesh is witnessing a constitutional row. The dispute is about whether the assembly Speaker has the power to disqualify an MLA who was convicted and sentenced to a two-year jail term by a designated special court for public representatives in Bhopal on the charge of assaulting a government servant.

The opposition BJP says the Speaker’s decision is unconstitutional. The ruling Congress is defending him on the ground that he has only followed Supreme Court guidelines in this matter. The dispute has got further complicated as the Madhya Pradesh High Court granted an interim stay on BJP MLA Prahlad Lodhi’s sentencing by the Bhopal court.

Interestingly, the Kamal Nath government’s majority hinges on the disqualified MLA’s fate. In the 230-strong assembly, the Congress has 115 MLAs and the BJP 108. Losing the Jhabua assembly by-poll in October had brought down the BJP’s tally from 109 to 108 seats and this could further decline to 107 if Lodhi is disqualified. The strength of the House too will come down to 229 and the Congress with 115 seats will automatically gain majority.

It was on October 31 that a Bhopal court sentenced Lodhi of Pavai assembly constituency and 12 others to two years’ jail for attacking RK Verma, a tehsildar, in 2014 in Panna district. The assault took place after Verma had allegedly stopped a tractor-trolley from carrying sand that had been mined illegally. The court, however, granted bail to Lodhi. On November 2, the assembly secretariat announced the disqualification of Lodhi following his conviction in the criminal case. The secretariat also informed the Election Commission that the Pawai seat had fallen vacant.

Speaker NP Prajapati said that as per a Supreme Court ruling, a public representative should be disqualified as soon as he or she is convicted and the rule was followed in Lodhi’s case. The Speaker cited the Supreme Court order of 2013 in the Lily Thomas case.

While disposing the Lily Thomas vs Union of India case (along with Lok Prahari vs Union of India) on July 10, 2013, the Supreme Court ruled that any MP, MLA or MLC who was convicted of a crime and awarded a minimum two-year imprisonment would lose his membership of the House with immediate effect. This was in contrast to the earlier position where convicted members held on to their seats until they had exhausted all judicial remedies. Further, Section 8(4) of the Representation of the People Act, which allowed elected representatives three months to appeal against their conviction, was declared unconstitutional by a bench of Justices AK Patnaik and SJ Mukhopadhaya.

In a shocking statistic, 41 percent of Madhya Pradesh MLAs (94 in the 230-member house) have criminal cases against them. This was revealed by the Madhya Pradesh Election Watch and Association for Democratic Reforms (ADR). Compare this to 32 percent (73) MLAs in 2013.

An MP assembly official told India Legal that as per the apex court’s ruling, a legislator stands disqualified if he or she is sentenced to two years or more in jail. That is why when a local court recently sentenced the Congress MLA from Sheopur, Babu Jandel, to jail for a year for participating in a “violent protest”, his membership was not contested.

Lodhi opposed the Speaker’s decision claiming that his membership was revoked because of the dictatorial attitude of the state government and that he had been granted bail after the lower court verdict. He moved the High Court against the disqualification. And on November 7, a single-judge bench of the High Court in Jabalpur, comprising Justice Vishnu Pratap Singh Chauhan, stayed the conviction and the two-year jail term of Lodhi till January 7, 2020. In its interim order, the bench also observed that on the basis of the discussions, the Court had found a strong case in favour of the appellant for suspension of the sentence. It also ordered that the case be listed for final hearing within two months after completing all the procedural formalities.

The state’s former Advocate General RN Singh, who appeared for Lodhi in the High Court, said that with the Court suspending the conviction and sentence, the Speaker’s order disqualifying his client and declaring his assembly constituency vacant automatically became “non-existent” now. But Advocate General Shashank Shekhar has said the government would file a special leave petition in the Supreme Court challenging the MP High Court’s decision to stay the conviction and sentence of Lodhi. Speaker Prajapati, reportedly, said: “I acted in the matter in accordance with the relevant law. The government is going to the Supreme Court now and whatever the apex court decides, will be the final decision.”

The BJP, however, is not prepared to wait for the Court’s decision on disqualification of its MLA. Even before the High Court stayed the sentencing, the BJP said that the Speaker’s decision was hasty and unconstitutional. A delegation from the BJP met Governor Lalji Tandon and submitted a memorandum, requesting that the membership of Lodhi be reinstated. It included former CM Shivraj Singh Chouhan, Leader of the Opposition Gopal Bhargava, BJP state president Rakesh Singh and former minister Dr Narottam Mishra.

Chouhan accused the Congress government of hatching conspiracies to save itself. He said Lodhi was disqualified in the wake of the lower court’s order but he had appealed and got a stay on his sentence from the High Court. “The Speaker’s decision was unconstitutional and not in sync with law,” he said. Gopal Bhargava alleged that the Speaker acted in a biased manner at the behest of the CM and added that if High Court order was not followed, it would be defamation of the Court. Rakesh Singh alleged that the Congress government was throttling democracy and Lodhi’s case was a burning example. He said that the Speaker should have taken permission from the governor before terminating the membership of a legislator. Former Vidhan Sabha Speaker Dr Sitasaran Sharma also said the Speaker’s order stood null and void now. “The Speaker should issue a fresh order about his November 2 order being no longer effective,” he said.

It waits to be seen how the political slugfest will be resolved.