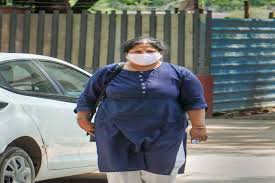 A Delhi Court today granted bail to Poonam Jain, wife of Delhi Minister Satyendar Jain, in a money laundering case. Court while granting interim bail noted that she was not arrested during investigation.

Jain was detained in connection with a money laundering investigation.He  was released from the hospital today and wanted to revoke his request for interim bail.

Special Judge Geetanjali Goel on Saturday  permitted Jain to withdraw his bail request. The spouse of Satyender Jain , was granted temporary release by the court in the meantime.

The reason she was granted bail is that she was not detained during the course of the inquiry and that the ED has already filed a chargesheet against her.

A prosecution complaint has been filed against Satyender Jain by the  Enforcement Directorate (ED) recently.

Not only him but his wife, and eight other people, including four companies, in connection with a money laundering investigation .

Interim bail was granted to Ajeet Kumar Jain and Sunil Kumar Jain, who were named as accused  in the chargesheet, for a personal bond of Rs 1 lakh each.