The Supreme Court on Friday adjourned Centre’s plea for separate execution of the four convicts in the Nirbhaya case.

A bench of Justices R Banumathi, Ashok Bhushan and AS Bopanna heard the petition.

Solicitor General Tushar Mehta said that the court doesn’t have to wait for everyone to exhaust their legal remedies.

Amicus Curiae in the case Anjana Prakash differed with the Solicitor General. “Pawan also has to be considered, he has not filed mercy petition yet. All four need to be hanged together. In my opinion,” said Prakash.

“We have to argue on merits. I am here to assist the court. Article 21 is a powerful weapon can not be used to defeat Justice,” Solicitor General Mehta responded.

Justice Bopanna said that convict Pawan had not filed anything till date and the court would wait till Monday.

A bench of Justices R Banumathi, Ashok Bhushan and AS Bopanna had also asked the convicts to file their response by Friday on the petition.

The name of Prakash, a former judge of the Patna High Court, was suggested by Solicitor General Tushar Mehta to represent Gupta.

Gupta is the only convict who has not yet filed a curative petition, the last legal remedy available to a person which is decided in-chambers. He also has the option of filing a mercy plea.

The Centre and Delhi government had moved the apex court against a Delhi High Court order holding that the prisoners could not be hanged separately.

The bench also reserved for today its order against on convict Vinay Sharma’s plea against the rejection of his mercy petition by the President.

Lawyer Vrinda Grover, appearing for convict Mukesh Kumar Singh, had informed the court about the applications moved by Tihar Jail authorities and Nirbhaya’s parents seeking a fresh date for the execution of the sentence.

She had pleaded to the court to extend legal aide to convict Gupta, saying counsel AP Singh would no longer appear for him.

The apex court had on Tuesday had sought the response of the prisoners on the Centre’s appeal against the high court verdict which dismissed its plea against stay on their execution.

One week’s time given by the high court to the convicts to exhaust their legal remedies, expired on Tuesday.

Justices Bhanumathi, Bhushan and Bopanna had also granted liberty to the authorities to move the trial court for issuance of fresh date for the execution of the convicts.

The bench had made it clear that the pendency of the appeal filed by the Centre and Delhi government before it would not be an impediment for the trial court in issuing fresh date of hanging.

Solicitor General Mehta, appearing for the Centre and the Delhi government, had said that the execution of “is not for enjoyment ” and the authorities were only executing the mandate of the law.

“The nation’s patience is being tested,” Mehta had submitted, while claiming efforts were being made by the convicts to delay the execution of the sentence.

On January 31, the trial court had stayed “till further orders” the execution of the four convicts — Mukesh Kumar Singh (32), Pawan Gupta (25), Vinay Kumar Sharma (26) and Akshay Kumar (31), who are lodged in Delhi’s Tihar jail.

The trial of the four adults began in a special fast-track court in March 2013 and they were sentenced to death in September that year. 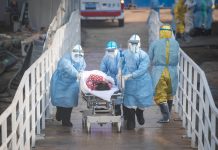