An independent judiciary cannot depend on the executive: CJI 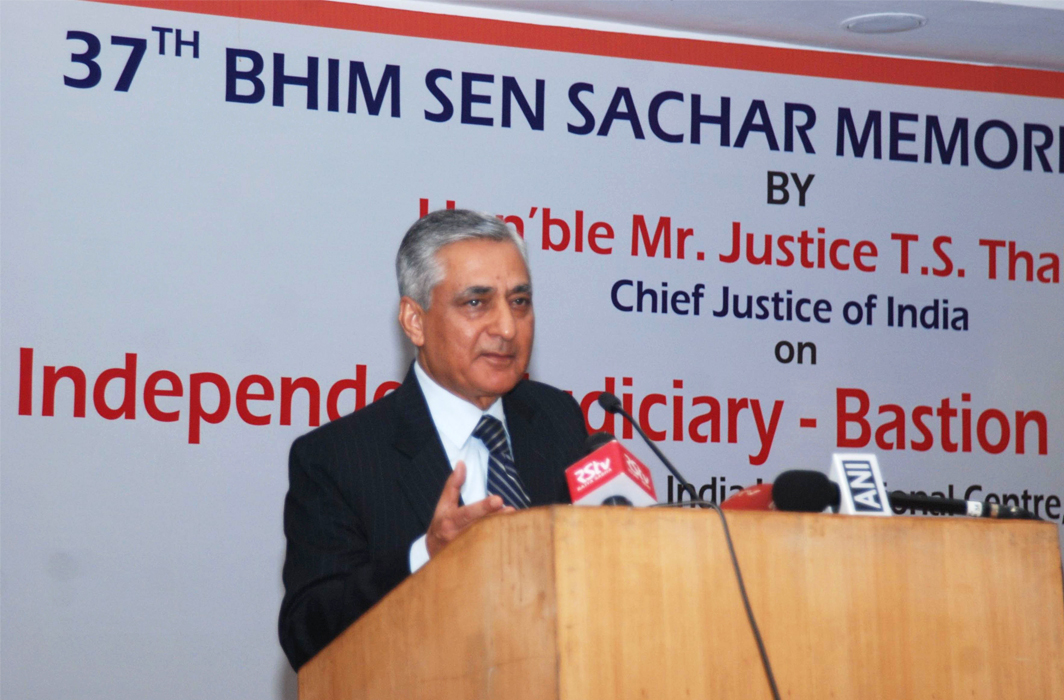 While delivering the 37th Bhim Sen Sachar Memorial Lecture, Chief Justice TS Thakur said that democracy without an independent judiciary would be like the solar system without the sun

Chief Justice TS Thakur while delivering the 37th Bhim Sen Sachar Memorial Lecture on “Independent Judiciary—Bastion of Democracy” in New Delhi on December 1 said that speaking about democracy without an independent judiciary would be like talking about the solar system without referring to the sun.

He said the judiciary comprises judges and the quality of the judiciary. He quoted Nani Palkhivala on Justice HR Khanna as the man who would not be cowed down by those in power. And he quoted jurist Cardozo on the judicial process saying that the judge is no knight-errant and that he does not express sentiments but draws inspiration from consecrated principles.

The chief justice has also made it clear that an independent judiciary cannot depend on the executive, with regard to allotment of work, in the sense which cases would go to which judge.

Justice Thakur defined the importance of the judiciary in terms of being the guardian of the rights of the people, the rights as enshrined in Part III of the Constitution. He said the judiciary is there to protect and enforce the fundamental rights and other constitutional rights. He went on to say that fundamental rights would be useless without an independent judiciary playing the role of the sentinel, and acting as a check on the executive if it did things bordering on tyranny.

Justice Thakur confessed that he had no text to deliver the 37th Bhim Sen Sachar Memorial Lecture. He said that he had asked the Supreme Court Research Centre to prepare a draft of the lecture. When the draft text reached him and he had asked his log clerk Parashar to check for errors in language, Parashar discovered that the draft text was a plagiarized version of another lecture on the same subject.

The chief justice wryly observed that the person who prepared the draft text was a judicial officer. He said that it appears that most judgments are prepared in this manner, picking up matter from here and there, and adding a few observations of one’s own. Thus he came to deliver the lecture without a prepared text.

Did you find apk for android? You can find new Free Android Games and apps.
Share
Facebook
Twitter
Pinterest
WhatsApp
Previous articleSupreme Court’s view on National Anthem needs to be contested
Next articleWhy is Punjab dithering in Dera case?