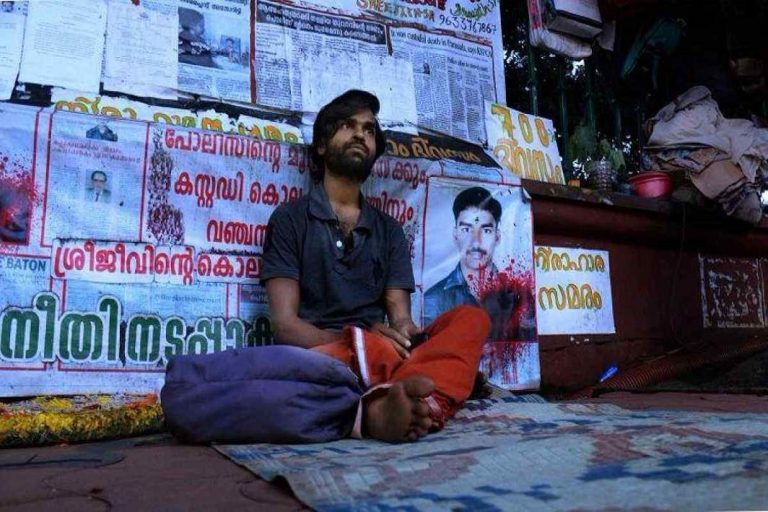 Above: Sreejith’s over-two-year-long fight for his dead brother has finally got civil society’s attention/Photo Courtesy: facebook

For Puthenveetil Sreejith, his brother Sreejiv was the only companion he had ever had. After losing their father at a very young age, they spent their childhood in an orphanage. He lost his beloved brother on May 21, 2014, to custodial death by the Parassala police in Kerala. In 2016, he started his struggle to get justice for his brother.

Sreejith’s fight caught attention when some unknown people uploaded a video of him sitting in the rain in front of the Kerala secretariat in Thiruvananthapuram, demanding a CBI probe into the death of his brother. He has been sitting in protest for some 800 days, facing the elements, including Kerala’s torrential rains. As the video went viral, the vernacular media picked up his story. This eventually led to massive support for Sreejith from across the state, including from Malayalam actors Nivin Pauly, Prithviraj and Parvathy and Kerala Blasters player CK Vineeth. Online support with the hashtag #JusticeFor­Sreejith also caught on.

MPs from Thiruvananthapuram and Alappuzha Shashi Tharoor and KC Venugopal, respectively, met Union minister Jitendra Singh to ask for a CBI probe into the matter. Finally, Kerala Chief Minister Pinarayi Vijayan also met Sreejith on the 767th day of his protest and assured him of a CBI inquiry.

The tragedy of Sreejiv’s life began on May 12, 2014, 10 days before the marriage of a young woman with whom he had an alleged relationship. Some police officials, including a sub-inspector, Phillipose, who is said to be the woman’s relative, barged into Sreejiv’s home at midnight and harassed his mother and Sreejith as Sreejiv was not at home. The police later found him in a lodge in Thiruvananthapuram and arrested him in a case of theft allegedly committed by him a year before. He died in custody a day before the woman’s marriage. The police claimed he had consumed pesticide crystals which he had hidden in his underwear.

However, a report by then chairman of the State Police Complaint Authority (SPCA) and former Kerala High Court judge Justice K Narayana Kurup revealed startling details about his case. Speaking to India Legal, Justice Kurup reiterated that Sreejiv’s case was a “custodial death”. A suicide note was “found” and produced by the police, claiming it was written by Sreejiv. Justice Kurup said that the “suicide note was fabricated by the police. It was done to make it appear like a suicide”. He said it was shown to the family members of Sreejiv, but they denied it was his handwriting. “When I read the reports submitted by the police, I found a ledger entry of a lodge in Attingal, Thiruvananthapuram, from where the police had taken Sreejiv into custody. The handwriting in the ledger entry, which was undoubtedly Sreejiv’s, was different from the suicide note submitted by the police. It was later confirmed that both the writings were by different people and it was proven in court.”

While Sreejiv’s case has caught media attention, the fact is that many custodial deaths take place in India and the victims are often forgotten and denied justice. National Human Rights Commission data from 2001 to 2010 records 14,231 deaths in police and judicial custody in India. The NHRC’s report of 2014 said there were 583 complaints and intimations regarding custodial death and rape in Kerala. However, a report by the Asian Centre for Human Rights—“Torture in India 2011”—says that not all cases of police and prison custody were reported to the NHRC.

A senior Supreme Court advocate working with Human Rights Law Network told India Legal that NHRC had a more accurate number of these deaths compared to the National Crime Records Bureau (NCRB). NCRB data of 2016 shows only two custodial deaths in Kerala. “This data is based on police stations reporting the cases. And custodial deaths are often shown as death due to illness, natural causes or suicide. The police hide the actual data and hence NCRB statistics are not reliable,” he said.

According to the vernacular media, the Union deputy minister for home had in December 2016 informed the Lok Sabha that 30 percent of the cases filed with the Kerala Human Rights Commission were about police atrocities. PA Pouran, general secretary, People’s Union for Civil Liberties, told India Legal: “Under the chief ministership of LDF chief minister VS Achuthanandan, Kodiyeri Balakrishnan was the home minister. But now, both these posts are held by the CM, Pinarayi Vijayan. Appointing ex-DGP Raman Shrivastav as his advisor in police matters speaks volumes.” 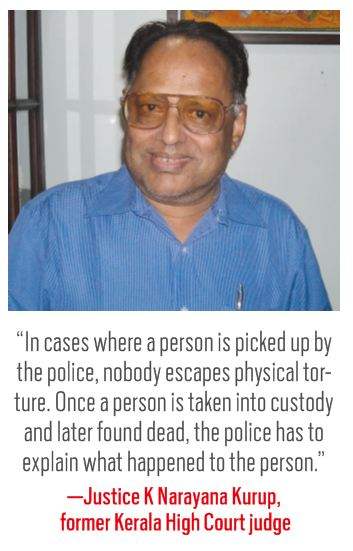 Pouran alleged that in 1991, Shrivastav had ordered that he wanted dead bodies of Muslims and on his instruction, an 11-year-old girl, Sirajunisa, was shot dead in her courtyard with the police accusing her of leading a mob to a nearby Brahmin-dominated village. This was when Palakkad was witnessing communal violence and the Sangh Parivar was taking a procession through the town to lend support to Murli Manohar Joshi’s ekta yatra.

Many a time in Kerala, an accused is arrested over a petty issue and later found dead. Vineesh, 32, was picked up from his house on March 16, 2016, by the Elamakkara police for not paying a fine. Four days later, his family was informed that he was being admitted to Thrissur Medical College hospital. When they reached there, they found him dead.

In another case, Johnson, again a resident of Elamakkara, was arrested by the police for drinking and creating a nuisance in public. He was released the next day but was admitted to a hospital as his health deteriorated. On the way to the hospital, he told his relatives that he was brutally beaten by the police and that his hands were tied and his head smashed against a wall. He died and his post-mortem report mentioned this head injury.

“In all such cases,” said Justice Kurup, “nobody escapes physical torture. Once a person is taken into custody and later found dead, the police are legally bound to explain what happened to the person.”

Justice Kurup said that custodial deaths should be investigated by a special investigation team as directed by the SPCA. “It is the fundamental principle in justice. If the police is involved in a murder and investigates it, the findings will definitely be one-sided,” said Justice Kurup.

He said the SPCA has all the powers of a civil court. Conclusions are based on evidence and the recommendation sent to the state government. In the Kerala Police Act under which the SPCA was formed, he said it is clearly stated that the orders of the authority have a binding effect on the government. “If the police does not comply with our directions, it amounts to contempt,” Justice Kurup said.

Pinarayi has been criticised by the Opposition and its own ally, the CPI. “The Pinarayi government wants to en-sure that no crimes are registered against the police at any cost,” said Pouran.

One of the cases that reached the Kerala High Court is the custodial death of Udayakumar who underwent police torture in Thiruvananthapuram’s Fort police station in 2005. He was tortured—made to lie on a bench and beaten on the soles of his feet and an iron pipe was rolled down his thighs. His post-mortem report said he had sustained 22 wounds, including that from the iron pipe. The High Court stayed trial proceedings in the case and the matter is being heard in a special CBI court after his mother filed a petition in the High Court. 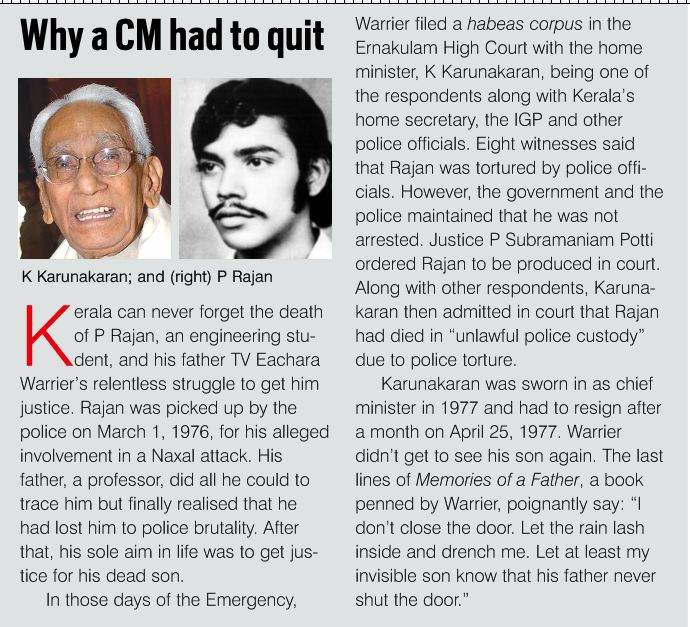 A former police constable, Heeralal, who was made an approver in the case, had submitted an interrogation statement admitting that he had prepared a fake FIR on the instruction of his seniors. But his statement was not even submitted by the CBI before the court. Three days after a forensic expert confirmed torture, the former ASI of Fort police station and one of the witnesses, Jalaludeen, turned hostile. In addition, Suresh Kumar, who was arrested along with Udayakumar, had already turned hostile. With other witnesses also doing so, the case seems to be going nowhere.

So, compared to these forgotten custodial death cases, Sreejith has been lucky. His struggle has found a voice in society. Will justice be finally delivered to him?