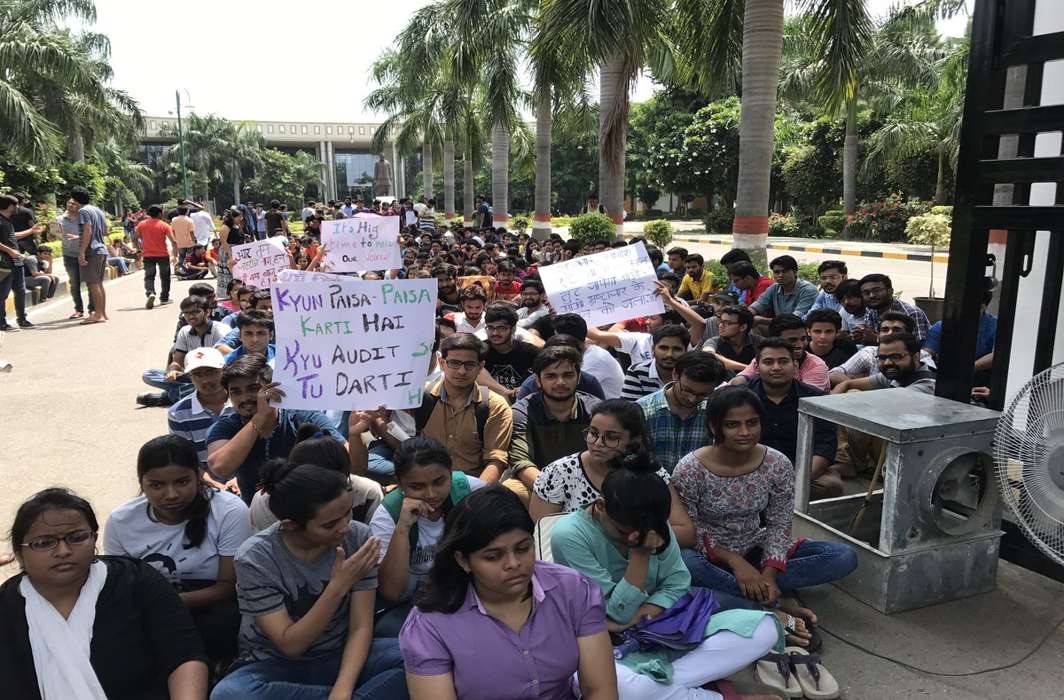 The past few months have seen some premier law universities descend into chaos as the administration and students battle it out over funding, infrastructure and faculty

Law schools are turning into battlegrounds, casting a shadow over the educational standards of the next generation to join the legal fraternity. Students in a number of National Law Universities (NLUs), prestigious nurseries for any law aspirant, have been on strike and clashed with the police and the administration, leading to chaos and casualties—one vice-chancellor was forced to resign. September witnessed protests in at least four NLUs—Guwahati, Ranchi, Lucknow and Vizag—which were demanding an Institute of National Importance (INI) status, similar to IITs and IIMs. 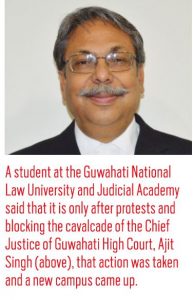 At the National University of Study and Research in Law (NUSRL) at Ranchi, a recent protest called by the students’ union went on for more than 10 days and ended only on September 20. An earlier protest in April had demanded a complete administrative overhaul, including the ouster of then vice-chancellor, BC Nirmal. It was called off only after a temporary V-C, Gautam Chaudhary, replaced Nirmal. However, the students made it clear that they would protest again if there was no improvement in the management of the law school. Similar protests in Guwahati National Law University and Judicial Academy (NLUJA) last May, forced the police to storm the campus, armed with shields, batons, barricades and water cannons.

These signs of lawlessness are worrying for India’s NLUs, which were set up as premier institutes on the lines of IITs and IIMs. Over the years, things seem to have deteriorated and complaints by student bodies have multiplied. These range from lack of services, recruitment issues and poor faculty. Most of the problems have arisen in NLUs in the so-called Tier-3 cities, giving credence to the view that legal education institutes are expanding too fast without the corresponding control on quality and infrastructure, including well-trained faculty. The result: simmering discontent has bubbled over. The constant discord between the administration and the students has also put a question mark on the tag of “excellence” given to these institutions. Students are selected through a tough Common Law Admission Test (CLAT) and only the best and brightest get in. That image has taken a beating with the rise in violence and administrative failures.

At the Guwahati National Law University and Judicial Academy, where clashes between students and police erupted last May, a third-year student told India Legal: “The issue stems from the administration’s apparent reluctance to provide students services that they have charged as a part of the annual fee. There was no university campus till February 2017. It is only after protests and blocking the cavalcade of the Chief Justice of Guwahati High Court, Ajit Singh, that action was taken and a new campus came up. This is the case with most of the newly formed NLUs. We will fight till we get INI status.” 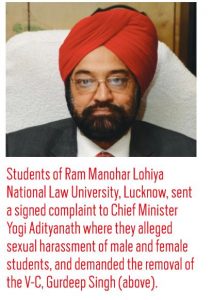 NLUs have been divided as per location and are situated in Tier-1, Tier-2 and Tier-3 cities. Those in Tier-3 cities are managed either by the chief minister of that state or the respective high courts. Therefore, funds are not from the central government and the state has to look after their functioning. This, allege students, has often led to mal-administration and malpractises.

In Ranchi, the situation has not improved despite the V-C being replaced. In late August, students alleged in a letter to the administration, that the promises made earlier were cosmetic, so a sit-in protest near the campus gates culminated in a verbal altercation between the V-C and around 200 students. The students demanded CCTV footage of the faculty recruitment process due to the poor standard of the teachers there. Chaudhary refused, after which a major confrontation took place. The police was called and patrolled the campus. Meanwhile, the Jharkhand High Court intervened and authorised the police to use force to clear out the protestors.

Several of them were also arrested. One of the protestors, a fifth-year student, said: “We were manhandled by the police. Water cannons were used to disperse the students.”

Similar problems have cropped up at Ram Manohar Lohiya National Law University (RMLNLU) in Lucknow. Here, too, there have been demands for the removal of the V-C. 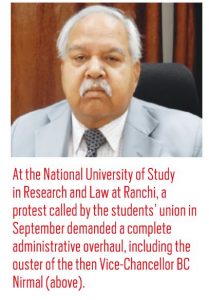 In September, the students sent a signed complaint to Chief Minister Yogi Adityanath where they alleged sexual harassment of male and female students by two senior administrative officers. They demanded the immediate removal of Vice-Chancellor Gurdeep Singh, registrar Shambhu Kumar, joint registrar JD Gangwar and assistant registrar Sanjay Diwakar, and an inquiry into the issue.

They also alleged that the quality of teachers was nowhere near the standard of a National Law University, and that the last two recruitments of teachers had led to the appointment of highly incompetent candidates. They also claimed that funds allotted to the University had been used as per the whims and fancies of the administrative officers and not in the interests of the students. Also, they alleged that the budget allocation for various committees catering to student interests was highly arbitrary, hampering their development. Time and again, they say, unreasonable monetary penalties were imposed on the students.

Plus, the University faced a huge crisis on the placement front and the administration had offered no cooperation or funds to facilitate this. RMLNLU spokesperson Alka Singh told India Legal: “There is an urgent need to look into the demands put forward by the students. NLU is a premier institute and students who have come to the college, beating the tough entrance exam, should get the desired satisfaction from it.”

Similar problems also surfaced at the Damodaram Sanjivaya National Law University, Vizag. The university was fighting for its campus since 2008 and got it a year back. The campus witnessed protests.

Support for the students’ cause has also come from Guwahati NLU and Amity Law School, Lucknow. Also, the Students Bar Association of National Law School of India University, Bangalore; Student Bar Council of NALSAR, Hyderabad and Student Juridical Association of Kolkata NLU have come forward and issued a statement expressing solidarity with the protesting students.

A joint statement said: “The recent unfortunate turn of events at the National University of Study and Research in Law (NUSRL), Ranchi, have starkly highlighted the problems plaguing all National Law Universities, old and new alike….

“The lax attitude of their administration is regrettable. The mismanagement of university funds robs these students of their legitimate aspirations of availing even basic amenities that are expected of a public university.”

What the students are demanding seems reasonable enough. They include annual publication of audit reports, appointment of a financial officer, setting up of a school review commission, permission for formation of a students’ union and increase in funds. Unless these problems are tackled, legal education in the country will suffer.