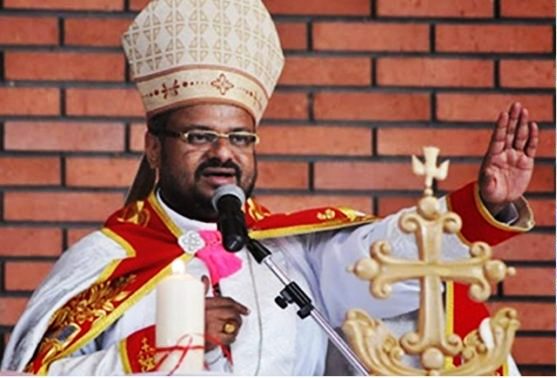 The LDF government in Kerala under the leadership of CPI(M) strongman Pinarayi Vijayan has in the past often won praise from even its harshest critics for the manner in which it has tackled several crises. But the same government is seemingly afraid of acting against Jalandhar Bishop Franco Mulakkal who allegedly raped a nun under his church. As the police team probing the case has returned to Kerala from Jalandhar without taking the bishop into custody, the general feeling among the people is that the government is tolerant towards those who commit heinous crimes against women, at least when the culprit belongs to a politically significant community.

The latest instance of the police’s timidity in touching the bishop, accused of raping a nun belonging to Missionaries of Jesus, a congregation under the Jalandhar Diocese, has brought disgrace to the police force as well as the government. Though 49 days have passed since the probe was launched, it was only last week that the investigating officers could enter the bishop’s house in Jalandhar to quiz him. But after questioning the bishop for just four hours, they had to return, thus raising suspicions of orders from above to let him be.

By restraining the investigating officers from arresting the bishop and asking them to return to Kerala, the government as well as the police higher-ups are giving the impression that someone who can mar the electoral prospects of the ruling party cannot be touched even if the act of crime is as heinous as rape and that too committed against a nun of the same church.

According to the 44-year-old nun, who is a former Superior General of the Missionaries of Jesus, which has a Mission House at Kuravilangad in Kottayam district of Kerala, Bishop Franco raped her 13 times between 2014 and 2016 at the Mission House. Though the nun formally complained to the state police on June 27, the police department and the government have been taking a dubious stand ever since. To add to the disgrace, the church leaders went to the extent of influencing the nun by offering 10 acres of land and setting up a separate monastery, for withdrawing the case against the Bishop. Simultaneously, there were also efforts to malign the nun and her family in public.

In fact, it was Franco himself who came to the police with a complaint that the nun was trying to blackmail him on June 23. As the investigators came to quiz her at the Mission House in Kuravilangad, she revealed the facts about the harassment meted out to her. When the police started the investigations, the sister as well as her supporters came out with a series of voices, videos and other incriminating proof against Franco.

The nun told the police that she had already complained to Major Archbishop George Alencherry, the Apostolic Nuncio in New Delhi, the representative of the Vatican and the Pope. But none of them had taken her complaint seriously. According to the Syro-Malabar church officials, as the Jalandhar Diocese comes under the Latin Church, they could not have intervened.

A section of the laity is deeply anguished over the fact that the delay in arresting Franco would drag the entire Christian community into disgrace and shame. It may be noted that four Syrian Orthodox Church priests are facing legal action following a complaint filed by a housewife for repeatedly being harassed, raped and blackmailed for making her sacramental confessions public. All the four priests have either been arrested or surrendered before the court in this connection despite efforts by the Orthodox church to hamper the arrests by moving the Supreme Court.

Human rights activist Jomon Puthenpurakkal has been fighting a legal battle for the last 26 years to ensure justice for Sister Abhaya, who had been found dead in the well of the Pius Xth Convent at Kottayam, Kerala, on March 27, 1992. He is of the view that the clergy, whether it is of the Roman Catholic Church or the Orthodox Church, while trying to protect the corrupt and criminals among the clergy, was distancing itself from believers and adding to the degeneration of the church. He pointed out that despite efforts by the Knanaya Church to protect the two priests and a nun, who have been accused of murdering Sister Abhaya, the matter has been brought before a court of law and trial is on.

“Now they (the church leadership) indulge in character assassination of the nun citing that she had waited for three years though she had allegedly been raped 13 times. The delay caused in reporting a crime cannot be cited as a reason for denying justice. She may have been threatened or denied opportunity to complain to the police. Two weeks back, a senior priest was ousted by the Pope in the United States for a rape he had committed 24 years back. Here, the church is trying to save the bishop and not coming to help the victim,” Puthenpurakkal told India Legal.

The priests, from the Malankara Orthodox Syrian Church, Father Sony Varghese (Abraham Varghese) and Father Jaise K George, had approached the Supreme Court for protection from arrest after the Kerala High Court rejected their plea. They were told by the top court to first surrender before the local court by August 13.

In the nun’s case, there have been serious doubts about the efficacy of the investigations right from the beginning. The investigating officers entrusted with probing the case, instead of reaching out to the accused, visited Cardinal George Alencherry, apparently to seek permission even to go to the Kuravilangad Mission House, the place where the crime allegedly took place, to meet the complainant.

At the same time, a sizeable section of the laity is also worried about the shocking downfall in the moral values of church leaders. They point out that such acts of cowardice to cover up heinous crimes like rape would seriously damage the faith itself.

The six-member team of the Kerala police, led by Deputy Superintendent of Police PT Subhash, who arrived in New Delhi to meet the Vatican’s representative, could not even enter the embassy’s premises. When they arrived in Jalandhar to question Franco, they had to go back as the bishop had summoned believers to prevent the policemen from entering the Bishop House. Finally, when they arrived with escorts of the Punjab Police, Franco had already left Bishop House. It was only after the church authorities’ direction that the bishop returned to Bishop House and was interrogated for four hours.

The investigators had told the media that they had gathered sufficient evidence against the bishop. But after questioning Franco for four hours, under mysterious circumstances, they were immediately summoned to New Delhi by the top police leadership, and later returned to Kerala without taking any action against Franco.

The Kerala police team met at least three nuns named by the complainant who had knowledge of her alleged sexual exploitation. The Jalandhar Bishop House PRO, Father Peter, claimed that they had fully cooperated with the police.

The sister had already communicated her struggles to Pala Bishop  Joseph Kallarangattu and he advised her to report the matter to the Major Archbishop. India Legal has accessed the nun’s written complaint to the church authorities in which she has clearly stated the bishop’s unbecoming behaviour. She had submitted audio and video recordings of the bishop’s talk and of his video chat while sitting naked.

She said to Bishop Sebastian Vadakkel that since 2013, when Franco took charge as bishop of Jalandhar Diocese, the situation at the Missionaries of Jesus changed, forcing 15 sisters (nuns) to leave the congregation “due to the moral and spiritual struggle given by the Bishop of Eparchy”.

“Many of the expressions of His Excellency cannot be recorded on paper because of their abusive nature and it is not at all suitable for an eparchial Bishop to use such words,” the nun said.

“Last year, I thought of leaving the congregation because I was unable to tolerate the dealings of the Bishop, and the phone calls and messages he sent with bad intentions. I shared the matter with Fathers and Sisters, and they advised me to raise the matter with the higher authorities of the church,” the nun said in the letter.