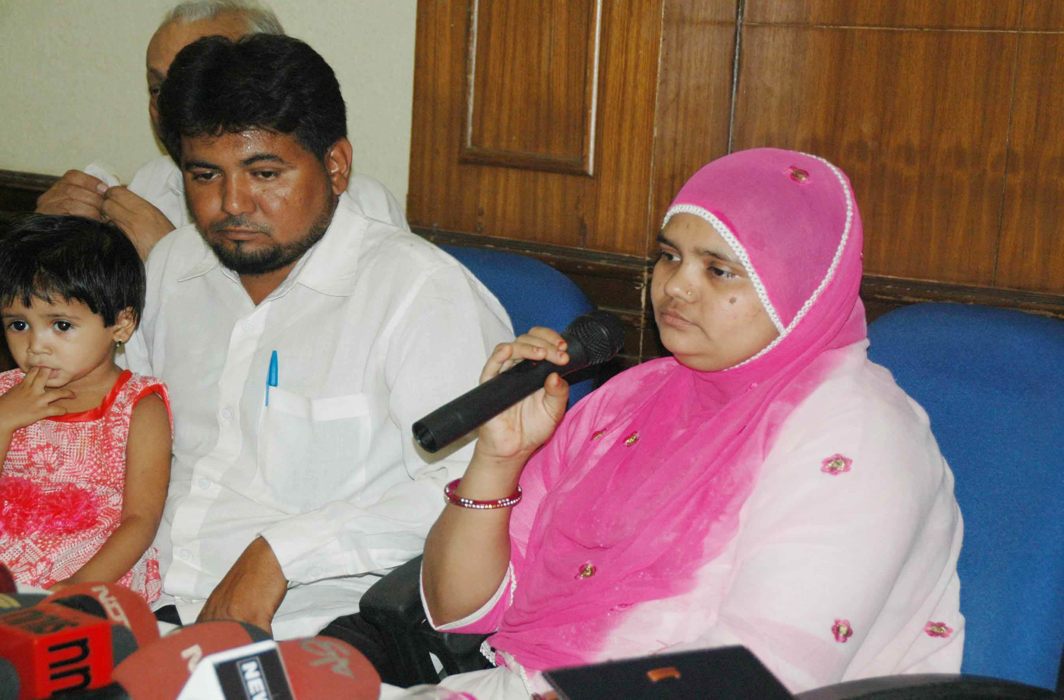 Above: Victim Bilkis Bano with her husband at a press conference in New Delhi/Photo: UNI

Seventeen years after the Bilkis Bano gang rape incident and six months after the apex court ordered relief for the victim, the BJP government in Gujarat shows disregard for compliance

Successive BJP governments in Gujarat have dragged their feet, particularly in matters relating to the minority community, even when the highest court of the land has unequivocally ruled its mind. This was once again brought into sharp focus on September 30, 2019, when the Supreme Court directed the Gujarat government to implement within two weeks an order given nearly six months ago in the case of Bilkis Bano, a gang rape victim of the 2002 communal riots in Gujarat.

Five months later, Bilkis was back before the apex court, through her advocate, Shobha Gupta, with a contempt petition that stated that despite the order, the Gujarat government had not provided anything to her. The reply by Solicitor General Tushar Mehta, that the compensation amount of Rs 50 lakh had not been provided for in the victim compensation scheme of Gujarat and that the state proposed to file a review plea, did not cut ice with the bench headed by CJI Gogoi and comprising Justices SA Bobde and SA Nazeer.

Mehta sought time to provide a job for Bilkis but the judges were unrelenting. Even two weeks’ time is not needed, the bench stated. Mehta had to give an undertaking to the court that their order would be complied with within two weeks.

Bilkis was 19 years old and five months pregnant when her family was attacked at Randhikpur village in Dahod district as they were trying to escape rioters. She was gang raped and 14 members of her family, including her two-year-old child whose head was smashed against a rock, were killed. She survived only because the rioters left her for dead. Though married, she has been living a nomadic existence, being forced to change 25 houses in 15 years due to threats by convicts in the case who were out on parole.

Vivek Dube, who later retired as Andhra Pradesh police chief in 2015, was the first head of the CBI crime team which took charge of the case under Supreme Court orders in December 2003. His investigations led a special court to sentence 11 men for raping Bilkis and killing her family members but acquitted seven people.

Among those convicted by the High Court were five policemen and two doctors who had botched up the initial investigation. Interestingly, of the five cops, four—a deputy superintendent of police, two inspectors and a constable—had retired and the fifth, a deputy commissioner of police, RS Bhagora, was dismissed from service only a day before his retirement on May 30 this year.

Despite the fact that his name figured in the Bilkis Bano case investigations by the CBI, Bhagora who was a state cadre officer was promoted to the IPS cadre in 2006, and until the day of his dismissal, was enjoying the key posting of deputy commissioner of police (traffic) in Ahmedabad.

The Supreme Court had on July 10, 2017, dismissed the appeals by Bhagora and other cops, stating that there was clear-cut evidence against them. Despite this, the government waited till virtually his last day in service to dismiss him, the apex court order for action against the errant officer notwithstanding.

While Bilkis, battling an intransigent state administration, has stoically roughed it out for almost 17 years and managed to secure justice, the patience of an elderly mother fighting for justice for her dead daughter, Ishrat Jahan, killed in an alleged fake encounter in Ahmedabad, has run aground.

On May 1, Shamima Kauser, the mother of Ishrat Jahan, submitted a letter to the CBI court in Ahmedabad stating that the slow and tiring pace of the wheels of justice has sapped her strength, and in frustration she has decided not to contest the case any further.

College student Ishrat Jahan and three others—Pranesh Pillai, Amjad Ali Rana and Zeeshan Johar—were killed on the outskirts of Ahmedabad by a team of the Ahmedabad crime branch then led by DG Vanzara on June 15, 2004, in what was later termed a fake encounter. The cops claimed that they were part of a Lashkar-e-Toiba terror module out to kill then Chief Minister Narendra Modi.

Shamima’s letter to the CBI on September 18 conveys that she no longer intends to remain a party to the judicial proceedings. The letter is a sad commentary on the prevailing state of affairs. “I am heartbroken and my spirit is shattered at the perpetuation of this culture of impunity. I have thus instructed my counsel, Vrinda Grover, that I have lost the will to fight. The long-drawn and labyrinthine judicial process has exhausted and frustrated me. I had never imagined seeking truth and justice could be such an uphill, arduous and life-consuming task and I now feel helpless and hopeless.

All the accused cops are out on bail and some have even been reinstated in service despite facing charges of murder and conspiracy.”

She has also mentioned the Gujarat government’s refusal to sanction the trial of the accused and said that “it is the job of the CBI to prosecute the 11 accused officers. This culture of impunity needs to be eradicated to protect vulnerable citizens”. Shamima’s letter was delivered during the proceedings on the discharge applications filed by four police officers.

This case is a classic example of how the shifting pendulum of political power brings about corresponding changes in key cases with such overtones. Metropolitan Magistrate SP Tamang, who submitted an inquiry report that said the encounter was fake, was subjected to an inquiry on his conduct on orders from the Gujarat High Court which was, however, set aside later by the apex court.

Satish Verma, a senior Gujarat cadre IPS officer, who was appointed to an SIT on the encounter, was shunted to the Northeast after he too revealed that the encounter was fake.

On the other hand, the accused officers in the case close to the BJP have had the benefit of the government’s largesse. Retired IPS DG Vanzara and NK Amin were discharged after the Gujarat government refused sanction to prosecute them. The CBI made it known that it would not challenge the order. Earlier in February 2018, senior police officer and former Gujarat DGP PP Pandey was discharged from the case, while the discharge plea of four remaining senior police officers has been moved. “I know for a fact that my daughter was killed in a premeditated manner. I have been up against some very powerful police officers who enjoy the patronage of the powers that be.” Nothing sadder could be said.