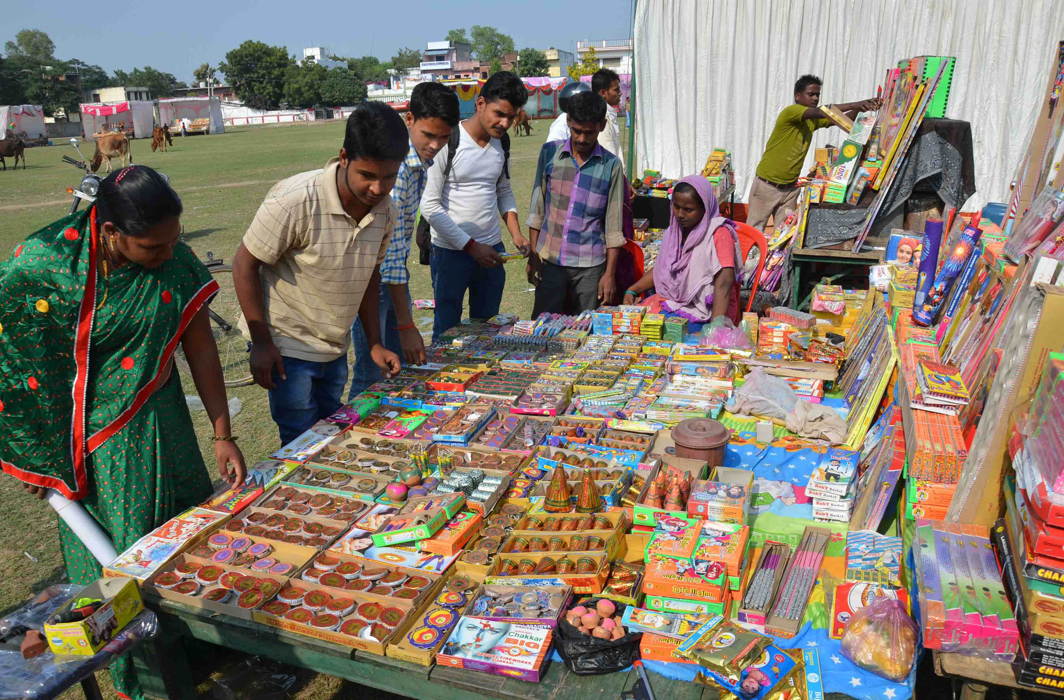 Above: Shops will find it tough to procure green crackers at short notice/Photo: UNI

On September 24, 2015, a writ petition was filed in the Supreme Court on behalf of three petitioners —two aged six months and one 14 months. A first of its kind, the petition said that the chemical composition of firecrackers adds to the already polluted air quality and asked the Court to ban their use in any form during festivals or otherwise. It, along with other connected writ petitions, urged the Court to pass interim orders regarding firecrackers.

It is a well-known fact that there are multiple contributors to the bad ambient air, especially in Delhi-NCR. Air quality in the area deteriorates with the onset of winter. The burning of stubble in neighbouring Punjab and Haryana adds to the pollution. Post-Diwali evening, there was a rise in PM2.5 levels by up to three times in Delhi in 2016.

What is so harmful about firecrackers? The chemical footprint left behind by them is toxic and has a deadly effect on children. Children—due to their hyper-activity—inhale more air and the­re­fore, more toxicity. Their immunity is weaker than adults, making them more vulnerable. Chemicals such as barium nitrate and cadmium compounds cause respiratory irritation and gastrointestinal problems, while aluminium sulphide is known to cause Alzheimer’s. Lithium and copper compounds cause hormonal imbalances and prove detrimental to physical and mental growth.

On November 11, 2016, the Court said that air pollution had gone up to 29 times the standard set by WHO. In an interim order, it directed the central government to ban the sale of fireworks within NCR. On September 12, 2017, the Court lifted the ban and allowed the sale of crackers with certain restrictions, effective from November 1, 2017, ie post-Diwali.

And on October 23, 2018, a bench of Justices AK Sikri and Ashok Bhushan ordered a conditional ban on firecrackers. It said only crackers with reduced emission and green crackers would be permitted to be manufactured and sold countrywide. The use of ash as a filter material in crackers is to be avoided, it said, in order to red­uce particulate matter (PM) by 15-20 per­cent. It also wanted redu­ced emission firecrackers with PM red­uction by 30-35 percent. Manufacture, sale and use of joint firecrackers, popularly known as “laris”, is banned.

Apart from air pollution, there is the issue of noise and solid waste associated with crackers. Barium salts which cause respiratory irritation and other harmful effects are also banned from being used in crackers. Online sale through e-commerce websites is banned and only licensed sellers are allowed to sell firecrackers which meet the approval set by the Petroleum and Explosives Safety Organisation (PESO), the Court said. PESO was directed to review the chemical composition of fireworks and ensure that the sale and purchase of the permitted fireworks are only during religious festivals like Diwali or occasions such as marriages. The order permitted crackers to be burst only from 8-10 pm on Diwali night and 11:55 pm-12:30 am on Christmas and New Year’s Eve nationwide. The governments at the Centre and Delhi-NCR were directed to identify designated spots for community celebration. The police is responsible for ensuring that fireworks are lit only in these designated areas.

The apex court has taken the middle path by avoiding a total ban and applying certain restrictions which can be implemented. Green firecrackers haven’t yet become a buzzword, so there is much left to guess. According to Raju, a fireworks dealer, eco-friendly crackers are yet to take off. “These crackers are based on a vacuum combustion method, producing less smoke,” he said.

Pyrotechnics or fireworks science is still a work in progress. A technology tested by CSIR (quoted in the Court order) generates water mist/ vapour which brings down PM levels after the cracker has burst. There is also electronic cracker technology which is like a light and sound show.

As the order has come just two weeks before Diwali, cracker sellers may not be able to implement it. According to PCA Asaithambi, president of Tamil Nadu Fireworks and Amorces Manufacturers Association, to make green crackers, a different formula has to be followed and it would require at least two years and adequate support from the government to follow the order.

Delhi State Congress spokesperson Saif Ali Khan: “The Supreme Court intervenes when it is needed. Pollution is rising, and burning of firecrackers causes mishaps and tragedies. However, burning of firecrackers cannot be at the cost of the health of people. I favour this verdict wholeheartedly. Why should there be a demand for longer hours? Think of people whose health is affected.”

BJP spokesperson Ashok Thakur: “Firecrackers entail huge investments. No doubt, firecracker business will suffer and the cracker industry will feel the pinch. However, the verdict was along expected lines. Businessmen should have been prepared for it. Having said that, I also feel it’s a matter of faith. Certain things are demanded by the society, and rituals and religion are among these. Regarding objections to noise pollution, why should people use loudspeakers during other festivals, or during namaz?”

Environmentalist Vikrant Tongad: “It’s not that the verdict targets only one particular community. The verdict is for the good of all. During winter, air pollution rises, which is why a ban on crackers, lighting of fires and odd/even vehicle rules are enforced. This is to avert the likelihood of a health emergency.”

Environmentalist Dr Dhruv Sen Singh: “Whatever the faith, it’s everybody’s responsibility to ensure that the environment does not get polluted in any way. Therefore, it is good that the SC has given orders to control pollution.”

Citizens have diverse opinions about the Supreme Court order. Gaurav Mathews, a resident of west Delhi, told India Legal that a partial ban will not make much difference. “If people can find firecrackers easily, what is the point of a ban at all?” Vivek Chatterjee, a resident of Ghaziabad, asked: “Who knows how much of these green, low-emission crackers are available in Delhi-NCR? However, restricting the period for bursting crackers is a good move.” But Mathews disagrees. Cracker bursting is preceded by puja and most people begin to burst them only after dinner at around 9 pm. “I do not think anyone would be mindful of the time restriction,” he said.

Noida resident Charugupta Banerjee is confused about green crackers. “What are these green crackers and how do they get designated as such?” he asked. He felt the Court’s move was in the right direction. “A complete ban would not work in cases like these where lifestyles, cultures and religious practices are so enmeshed with each other. But how will the order be implemented? I can already hear bursts of firecrackers. How will the police check this?”

Mallika Mehendiratta, a resident of Vivek Vihar, feels a ban is too harsh a measure and that an advisory would have been enough. “A ban of any kind takes away the liberty to celebrate.”

Given that the air quality in Delhi has reached unhealthy levels, every step to make Diwali green will count. A huge responsibility rests on the Delhi government and the people themselves to bolster this step by the apex court.