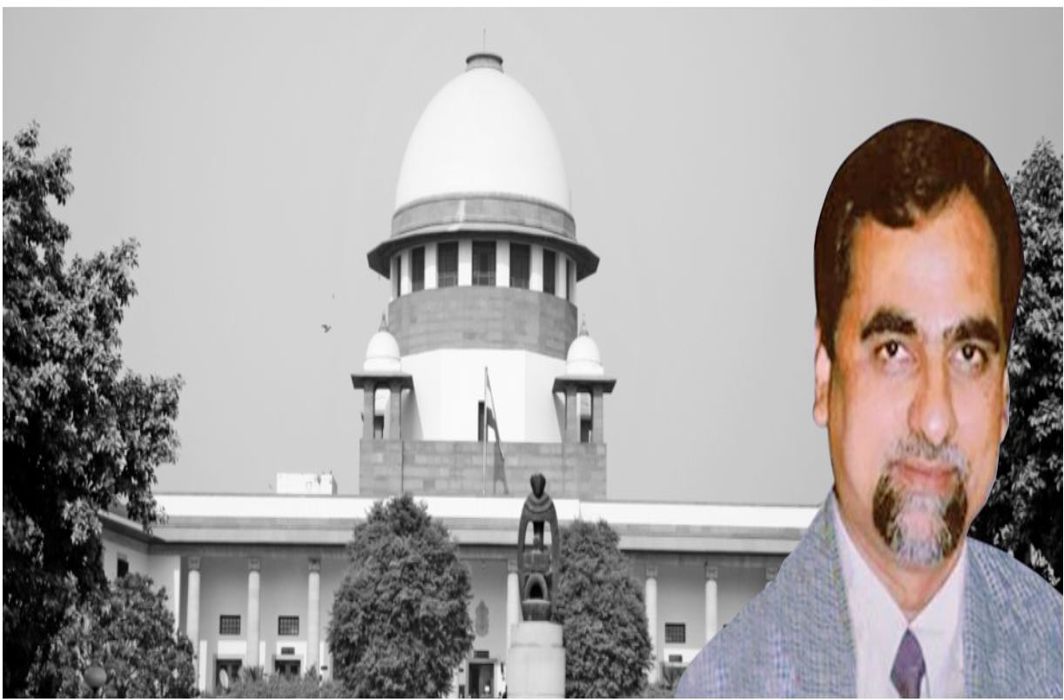 A three-judge bench of the apex court, while unanimously dismissing  plea seeking investigation into the mysterious death of Judge Loya, said there would be no probe into the matter and that petitions in this regard were scandalous

Supreme Court bench of Chief Justice Dipak Misra and Justices AM Khanwilkar and DY Chandrachud has said that the death of CBI special judge BM Loya was due to “natural causes” and dismissed petitions in this regard. The Court also said the petitions were scandalous because they cast aspersions on the veracity of the statements of other judges who were lodged in the same room as Judge Loya at Ravi Bhavan in Nagpur, in his last hours.

Hearing the plea for an independent probe into the sudden and mysterious death of this judge who was handling the Sohrabuddin Sheikh fake encounter death case in which BJP President Amit Shah (also home minister during the Gujarat riots) is an accused, the bench found no merit in the case and dismissed it. It decided that there would be no probe into the death and made it clear that it had actually stopped short of ordering contempt proceedings against the petitioners.

While reading the judgment (there was no dissenting voice in the order), Chief Justice Misra said: “We can’t doubt the statements of the judicial officers who were with Loya” in his last hours. “Documents placed on record and their scrutiny establishes that Judge Loya’s death was due to ‘natural cause’.” The CJI further said: “All the three judges stayed in the same room. There is no basis for the court to doubt that. In the reference book, there is no mention of Judges Modak and Loya. All of them occupied the same room. No doubt on that.”

He also referred to the Caravan report which mentioned Loya’s conversation with his wife. He then said: “An attempt was made to scandalise this case.” He referred to the evolution of the PIL and how it was “misused, which is a serious issue to look into”.

“It is the duty of the court,” said Chief Justice Misra, “to look into the fact (as to) which PIL is genuine and which one is filed under the facade of political activity. Business rivalry is to be resolved in a competitive manner on the terms of the market….The present case is indeed a case in point. The petitioners have no mala fide intention, but to protect the independence of judiciary. The judiciary is there to preserve the rule of law. If the court doesn’t stand by them, it will be a failure of our duty to impart justice.”

Senior advocate Harish Salve (for the Maharashtra government) said that a discreet inquiry was conducted by his client to probe the death of Judge Loya and four judicial officers had concluded that there was no foul play involved. Salve also asserted that the special CBI judge had died of cardiac arrest. However, Dushyant Dave (for the Bombay Lawyers Association) said: “There are so many things which showed that he (Judge Loya) never checked in (at the hospital mentioned by Salve).”

Dave asked: “Why was the dead body not sent to his house or his family not informed? They say that they informed his friends. It is a serious matter. The State is resisting it. Our case is that the death is suspicious. In reports, there are many discrepancies. Let’s accept (for argument’s sake) that the death was natural. Even then, what’s the harm in having an investigation if so many questions have come up before the bench? The bench must direct that let the pleadings be completed so that he has time to file the rejoinder.”

Dave also said: “It was surprising that Special CBI judge MB Gosavi (who replaced Judge Loya) disposed of the case so quickly, even though thousands of pages of evidences was recorded. The CBI didn’t file any appeal as to who was directed to investigate despite a mandate by the SC to file chargesheet against Amit Shah (BJP president).”

“No proper action and treatment was given to Judge Loya for two and-a-half hours in nearby hospitals despite him having complained about chest pains earlier… The entire family of Justice Loya lived in Mumbai. Is it acceptable to hand over the body of the judge to a stranger by the judges? Let them present the photographs of the marriage ceremony. Let us see who all were present at that time.”

Senior advocate Mukul Rohatgi countered: “The handing over of the body of Justice Loya to a stranger never happened. A district judge was present there and his statement was recorded.”

However, Dave questioned: “Justice Loya died under the most questionable circumstances. Why was the body of Justice Loya sent to his native place when his entire family lived in Mumbai? The Chief Justice of the High Court was repeatedly going out of his way to help the subordinate judges. Hospital records say that the judge was brought dead. The judge was brought dead and the bill charged upon the body of the dead judge was horrific. Mr Rathi also says that the judge was brought dead to the hospital. A person who dies of heart attack and you do neurosurgery. Every fact is revealing shocking facts. How you can say that a person who died out of heart attack underwent neurosurgery?”

Dave also said: “The post-mortem report is also fabricated. The post- mortem register recorded some other time, when the post mortem report was done by 10:50 am. Post-mortem was done 4 hours after the death. After 4 hours of death, the body becomes stiff.”

There was a demand for calling for the judge’s mobile records.

Senior counsel V Giri said there was no document which established what happened in Dande (hospital). The document does not reveal what treatment he (Loya) underwent.

He said that Page 52 of the compiled documents submitted was incomplete. That page states two injections were given but there are no details by which it can be established what treatment was carried out.

He also said that while post-mortem was conducted by Dr Kunda in Nagpur, no documentary evidence has been recorded. Which means no statement was taken from that doctor.

He further mentioned certain important submissions of senior counsel Indira Jaising, V Giri, Prashant Bhushan and Dushyant Dave. He said that Bhushan had once made the statement that Justices Chandrachud and Khanwilkar had been judges of the Bombay High Court and knew the judicial officers and might face a similar danger. Regarding this, the CJI said: “There are higher values that guide us.” He said serious attacks have been made on the two judges of the Bombay High Court. “We would not initiate investigation via criminal contempt of the lawyers…”

The issue was heard in detail over several sessions by the bench, with depositions by senior lawyers. A probe, if ordered, would not only have opened old wounds, but would have put the current government in an uneasy position.

The Loya case is three years old and was virtually forgotten till it was dug out by Caravan which had several in-depth interviews that apparently cast a long shadow on comments made by the judicial officers and judges after his death. Many of them had worked with Judge Loya.

There were many unanswered questions—the timing, choice of hospital where Judge Loya was taken, the veracity of the ECG (if at all carried out), the judges’ comments… The bench questioned the fact that while four people (judges) were staying in one room at the Ravi Bhavan VIP guest house, Loya’s name not in the log of the guest house. There was the issue of the removal of the judge’s security cover just before he left for Nagpur. As the judge in a sensitive case, he had been allotted personal security which was missing when he was attending the marriage in Nagpur.

The circumstantial issue was of the new CBI judge who took over after Loya’s death and dismissed the case quickly despite mountains of documents. There was also the question of umpteen witnesses turning hostile. Caravan and the petitioners questioned the logistics of every move and the top court found this unpalatable. Ordering a probe would have complicated matters and would add no further clarity, it felt.

The petitioners questioned why Loya was first taken—at around 4 am—to Dande Hospital which did not have adequate facilities (see box). Here Loya was given medicines before those accompanying him attempted to remove him to another hospital, Meditrina, where he was declared brought dead.

Two petitions were filed—one by Tehseen Poonawalla, who claims to be a “political trendsetter” and another by Bandhuraj Sambhaji Lone, allegedly a journalist from Maharashtra. The CJI  agreed to hear the petitions, which were clubbed together, on January 12.

This case was also one of the primary reasons for a mutiny of sorts among four judges of the top court. On January 12, four senior judges held an unprecedented press conference to express their dissatisfaction with the chief justice allocating specific cases to specific benches. This precipitated a huge crisis in the top court and the allocation of the Loya case was a prime issue because it was a politically high-profile and sensitive case.

Initially, this case was assigned to a bench that had Justice Arun Mishra on it. That did not go down well with the four judges. Later, Justice Mishra recused himself from the case and Justice Dipak Misra assigned it to the CJI bench. Meanwhile, as the issue got politicised, the Congress said that the judgment would raise more questions and leave many of them unanswered. “Dispassionate analysis of Loya judgement must await its full reasoning. But unless logical reasons found in it, it will raise more questions and leave many unanswered [sic],” Congress spokesperson Abhishek Singhvi said on Twitter. Congress communications in charge Randeep Surjewala said the PM should order a Supreme Court-monitored probe to ascertain the exact reasons for the death of judge Loya.

Union Law Minister Ravi Shankar Prasad said the Congress and Rahul Gandhi had conspired to target Shah. “It was a conspiracy by the Congress and its chief, Rahul Gandhi, to finish the political career of BJP President Amit Shah, as part of which wrong accusations were made and an over 100-strong delegation was taken to the president.”