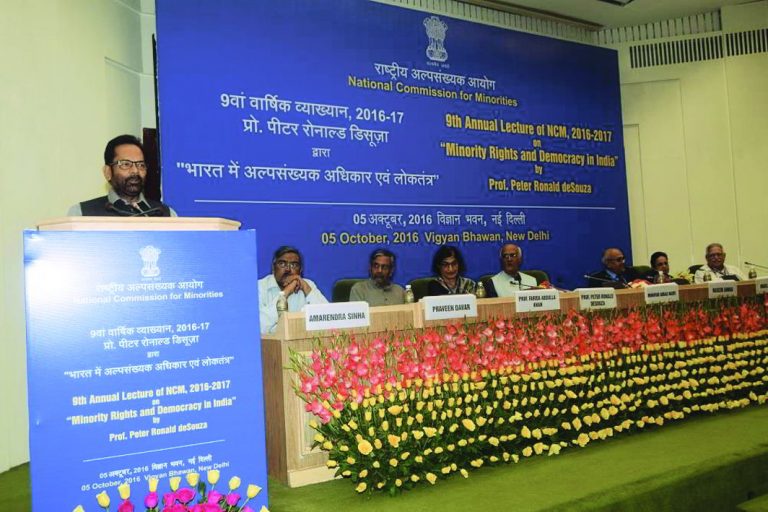 Above: A lecture programme on minorities organised by the National Commission for Minorities in New Delhi. Photo: minorityaffairs.gov.in

A petition contends that the Hindus, who are a minority in eight states, are being deprived of their fundamental rights

IT seems a bizarre petition. Ashwini Kumar Upadhyay, a lawyer and BJP leader, recently filed a PIL in the Supreme Court seeking minority status for Hindus in states where the community’s population has decreased according to the 2011 Census. He contended that the Hindus’ rights in these eight states are being infringed upon because neither the centre nor state governments have notified them as a “minority” under Section 2(c) of the National Commission for Minorities Act, 1992. Upadhyay further pleaded that as a result, the Hindus are being deprived of their basic rights guaranteed under the Constitution.

Christians are a majority in Mizoram, Meghalaya and Nagaland, and there is a significant population of Christians in Arunachal Pradesh, Goa, Kerala, Manipur, Tamil Nadu and West Bengal as well. But they are still treated as a minority. Likewise, Sikhs are a majority in Punjab and there is a significant Sikh population in Delhi, Chandigarh and Haryana, but they are also treated as a minority, the petition pointed out. Upadhyay had challenged Notification No. (1993-SO No.816 (E),F.­No.1/11/93-MC(d)), dated October 23, 1993, as not only arbitrary and irrational but also invalid and ultra vires of the Constitution and its basic structure because it did not declare Hindus a minority in certain states.

The PIL further pointed out that the Muslims are a majority in Lakshadweep (96.20 percent) and J&K (68.30 percent), and there is a significant population of them in Assam (34.20 percent), West Bengal (27.5 percent), Kerala (26.60 percent), Uttar Pradesh (19.30 percent) and Bihar (18 percent). As a result, the communities which are real minorities are not getting their legitimate share due to non-identification and non-notification of minorities at the state level.

Upadhyay relied on the 11-judge bench judgment of the Supreme Court in the TMA Pai Foundation case of 2002. In that case, the Court held that Arya Samajis, who were Hindus, were a religious minority in Punjab, even though they may not have been so in relation to the entire country.

He urged the apex court to declare the 1993 notification as invalid and ultra vires of the Constitution, lay down appropriate guidelines for the identification of minorities, and ensure that only those groups of persons which are numerically inferior to other groups and are in non-dominant positions enjoy the rights and protections guaranteed to minorities.

The fact that majoritarianism has been the dominant political narrative in the past three years lends the petition an air of the unnatural.