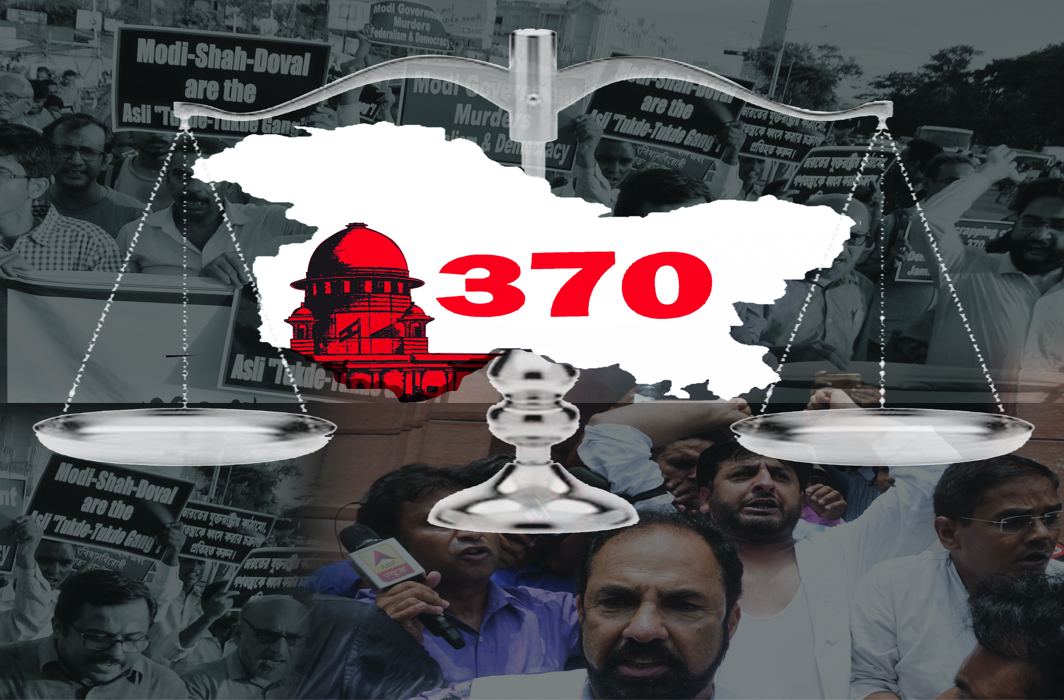 A five-judge Constitution bench headed by Justice N V Ramana reserved its orders on whether the batch of pleas challenging the abrogation of Article 370 of the Constitution should be referred to a larger Bench of the Court.

The bench heard multiple pleas challenging the Presidential Orders of August 5 and 6 issued under Article 370 of the Constitution which removed the special status granted to Jammu & Kashmir.

3:08 pm: Bench to pass an order. Date will be notified soon.

3:08 pm: Parikh also said that a lot of intolerance is shown by his fellow colleagues which is not correct in light of the present circumstances. “We  are being accused only for the fact that we are advancing our arguments,” adds Parikh.

3:08 pm: Senior Advocate Sanjay Parikh begins his submissions – Is every order of the government generating cause of action is tenable?

2:49 pm: Dwivedi says the Constitution of J&K cannot be wiped out as per Article 370 and the first and second order has to go.

2:48 pm: “Since all the provisions of the constitution are not temporary because they are amendable, by that logic, Article 370 also cannot be said to be temporary,” says Dwivedi.

2:48 pm: “The whole constitution of J&K has been wiped out because of executive orders. The sufferings of the people there is itself showing the real situation,” says Dwivedi.

2:48 pm: Senior Advocate Dinesh Dwivedi starts giving his submissions. Argument is power to be exercised under 370 is not available because 370 says the provision is temporary in relation to something or some events.

2:23 pm: CU Singh says – My humble submission is on point that don’t call for a referral at all.

2:23 pm: Senior Advocate CU Singh- The questions which arises in relation to the effect of J&K constitution and Indian Constitution in this situation is Sui Generis.

2:20 pm: Senior Advocate C. U. Singh starts Submissions. He says, this is an unique situation where there is an interplay between sovereign constitution of Republic of India and a constitution of a particular state.

12:59 pm: Dhwana says exercise of power should not but the non exercise of the same should be subjected to judicial review.

12:46 pm: Dhawan refers to the incidents of Kashmir, “Incidentally has been given a wide interpretation by your lordship but can it go to the extent of breaking a constitution”.

12:46 pm: “I only wanted to point out that a State was dismembered by the powers of the Union. Current is situation of Kashmir is very unique in nature, therefore, question of reference should not arise, “says Advocate Dhawan.

12:45 pm: Dhawan says – Referral have been made to the constitution bench, no further referral should be made.

12:45 pm: “If referring to Mountbatten and Nehru by Solicitor General can be relevant, then this for sure is relevant”, says Dhawan.

12:38 pm: “If your lordship refers a matter beyond 145(3) then per incuriam must be kept in mind,”says Advocate Dhawan.

12:14 pm: “In 1934, suddenly there was an uprising in Kashmir bcz they wanted democracy. 1939, Maharaja gave a constitution to Kashmir. So, we are not talking about one constitution but three starting from 1939,” says Senior Advocate Dhawan.

12:12 pm: Senior Advocate Dhawan says he doesn’t agree on interpretation of Sampat Chak made by Attorney General. Requests for a different interpretation.

12:11 pm: Solicitor General says – Most of the arguments made my Advocate Shah is political point only.

12:10 pm: Senior Advocate Dhawan says that Attorney General’s argument should not be made on any political point but on substance.

12:08 pm: Solicitor General – On reference to the larger bench : if there is any inconsistency and that is of such nature and substance that it renders one of the judgment incorrect then only reference to larger Bench can be done

12:08 pm: Solicitor General  Tushar Mehta – Inconsistency between Prem Nath Kaul and Sampat Chak was never there and that opposite side may have read two different perceptions of it.

12:08 pm: Attorney General reads out Article 1 of the constitution and submits that it is independent of art 370. Jammu and Kashmir has been part of India and article 1 applies on them too

12:08 pm: Attorney General says challenge on ground saying that there is any inconsistency in Prem Nath Kaul and Sampat Chak is totally irrelevant.

12:08 pm: Attorney General mentions sampat chak judgment to emphasis that all the questions related to operation of art 370 has been answered in this judgment.

12:08 pm: “Prem Nath Kaul case talks about the powers of the Constituent Assembly and that of Yuvraj Karan Singh at the time when State was transferred to him. There is no mention of Article 370,” says Attorney General.

11:38 am: Attorney General says – Prem Nath Kaul merely talks about the powers of the Constituent Assembly as well as the powers of Yuvraj Karan Singh when the State was transferred to him. Where is Article 370 ?

11:37 am: “There is no conflict between Sampat Prakash and Prem Nath Kaul. So, how can this issue be referred to a larger Bench?” – Attorney General

11:38 am: Attorney General cites the Prem Nath Kaul judgement of 1959, says specific words were used: ““On 25.10.1947, the Maharaja signed an Instrument of Accession with India which had then become an independent Dominion.”

11:36 am: “The attack is on Maharaja’s competence and not on Article 370 as per which govt of India did whatever it did,”added the Attorney General.

11:30 am: Attorney General says that the argument that Plebiscite did not take place or the Standstill and Merger Agreement was not entered into are irrelevant.

11:13 am: Attorney General says – The purpose for this story of integration of the Indian States is to show the consolidation of the country. I want to show that the sovereignty of J&K was indeed temporary. We are a Union of States.

11:10 am: Attoney General reads out section from V.P. Menon’s book called “Integration of the Indian States”. This is to showcase the relationship between the Maharaja and Pakistan and the basis of Maharaja’s subsequent IOA with India.

11:09 am: Delving into the history of the State, the Attorney General says that he will differ on many counts. For instance, Maharaja had entered into a Standstill Agreement with Pakistan

11:05 am: Attorney  General says – They were separatists who were sent especially to create chaos in the state.

11:04 am: “It was after that when Maharaja came for the rescue to the India to drive away the Pakistani army from their land” says the Attorney General.

11:03 am: “No it signed standstill agreement with Pakistan but then Pakistan violated the agreement terms,”says Attorney General.

11:03 am: Justice Kaul says – There was a time when Maharaja was not able to decide that who to merge with.

10:56 am: Ättorney General says – ‘Separatists are not bad elements’ is an incorrect statement, as  they want their own state.

10:55 am:  “On the issue of referendum, there were separatists who supported this because they wanted sovereignty for the State. The will of the people resided in that,”says the Attorney General.

10:54 am: “But it was agreed that there will be plebiscite after the war although instrument of accession does not talk about it explicitly,” says the Attorney General.

10:54 am: “When Kashmir was being forced to merge into Pak and it didn’t want to, Maharaja went to UN, but UN declined by saying that it cannot send an army to an independent nation. Then he went to Pt. Nehru, who agreed to send the army,” argues Attorney General.

10:48 am: Senior Advocate Shah says that the merger documents for Kashmir has not been executed, neither the standstill document.

10:43 am: “Substantially no but the merger terms are different. We did not have access to the original instrument of accession of other princely state,” replies Shah.

10:43 am: Justice Kaul asks Advocate Shah – Is instrument of accession of Kashmir different from that of other princely states?

10:40 am: Senior Advocate Zaffar Ahmed Shah continues his submissions before the 5-judge bench.

Did you find apk for android? You can find new Free Android Games and apps.
Share
Facebook
Twitter
Pinterest
WhatsApp
Previous articleTeam India needs to erase the past in New Zealand
Next articleAgustaWestland Case: Court adjourns hearing on pleas by ED and Khaitan