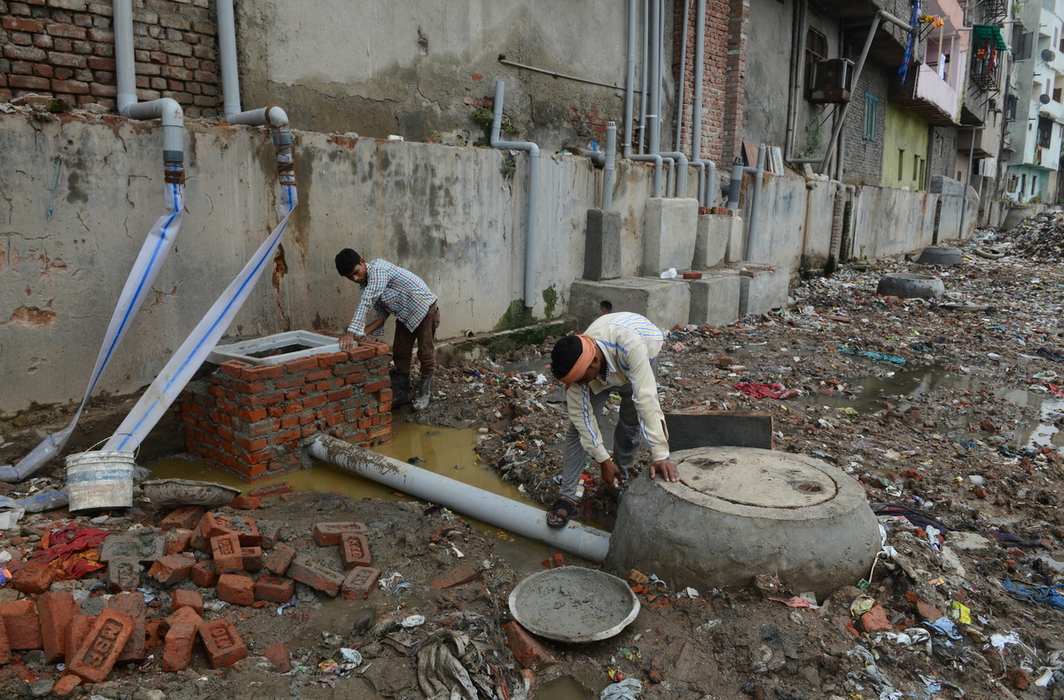 Above: A sewerage line being repaired in Delhi. Many houses are not linked to the sewer network/Photo: nizamuddinrenewal.org

In May 2015, the National Green Tribunal (NGT) issued an order directing the authorities to charge every household in Delhi an environmental compensation amount for generating sewage, based on the polluter pays principle. This was irrespective of a household being connected to the sewerage system or not.

A fine of Rs 5,000 was to be charged if individuals or municipal corporations were caught dumping sewage in the drains or the Yamuna. Also banned were illegal or unauthorised washing, slaughtering and running of dairies.

However, the impact of the order has been limited due to various reasons, not the least being judicial interventions. That the enforcement of the order itself was not mandatory is another major drawback. Thus, for more than four years, the NGT’s orders, given in 2015, went largely ignored.

However, on October 24, 2019, the Supreme Court upheld the NGT’s September 2019 order issued to the Delhi government asking it to start levying sewerage charges on all households in the capital within two months. Invoking the polluter pays principle concept, the green court asked the Delhi government and its departments to include a sewerage charge for households which generate sewerage. The order was part of the Tribunal’s initiatives aimed at reducing pollution in the Yamuna and protecting its biodiversity.

The NGT also warned the enforcing authorities that stiff fines would be imposed if the order was not followed. The Tribunal also gave an action plan to control pollution levels in the river.

Environmentalists applauded the decision and said people should be made to pay for sewage they generate so that it can be treated. As untreated sewage ends up in the Yamuna, the river remains polluted. Manoj Misra, convenor of Yamuna Jiye Abhiyan, said, “The government must ensure that wherever there is 100 percent coverage, households take legal sewer connections. Those who do not comply must be penalised heavily.” “A slew of actions need to be taken to clean the Yamuna. We need to change the art of pollution control,” said Sushmita Sengupta, programme manager at Centre for Science and Environment, a Delhi-based NGO working on water issues.

The city’s apathy towards proper waste disposal is something Delhiites deal with on a daily basis. “Dumping of solid waste in the river even during the day is fairly common,” said Gaurav Kumar, a senior executive at a software firm. “On my weekly trips to Noida, it is a common sight to see people dumping waste in the river, including plastic bags and other stuff,” he added. “People dump flowers and other puja materials fairly routinely,” said Rajan Banerjee, a resident of Noida who works in Delhi.

According to the NGT order, dumping of debris can invite a fine of upto Rs 50,000. Encroachment and illegal construction on the banks of the river are also prohibited. Illegal dumping is hard to check and hence no fines are levied though matters are expected to improve once the monitoring set up on the flood plains is completed. The DDA has been able to do little about illegal construction and dumping of debris and puja materials into the river. As per the recent report from the agency, most of the challans issued are for illegal parking and not for dumping activities.

But things should get better according to the responses filed before the Monitoring Committee (MC) set up by the Tribunal following the 2015 order. The DDA has finished installing CCTV cameras in nine locations and installation of another 102 CCTVs at 34 identified locations has been initiated. A lot of work, however, has been held up as authorities like the Railways, National Highways Authority of India, Gas Authority of India Ltd and Uttar Pradesh Irrigation Department, who own the land on which the monitors are to be installed, have not given permission to carry out the CCTV work.

The DDA has also detailed before the MC the technical hitches that came in the way of imposing the Environmental Compensation (EC) fee. The charge was to be levied on the residents as part of their electricity bills, water bills and property taxes. However, following the NGT order, an electricity distributor licensee opposed it in the Supreme Court (2015), resulting in the stay of the order. Citing the Delhi Electricity Reforms Act, 2000, and Electricity Act, 2003, the Delhi Electricity Regulatory Commission (DERC) claimed that imposing an additional tariff burden on consumers for costs incurred towards collection of the EC fee would be in violation of the Acts. This is one of the reasons why the EC is yet to be charged, even after four years of the NGT order.

Charging EC fee as part of the water bill also presented problems as in Delhi, the government’s sop of free water up to 20,000 litres per month meant that the sewage charge was subsumed in the water subsidy. Yet another problem, as reported by the Delhi Jal Board, is that though the sewer network in the capital has increased significantly, the number of houses connected to it is still very low. For example, even though entire East Delhi has a sewer network, only 60 percent of the houses are connected to it. And there are no policies or regulations in place to ensure that all houses are connected to the network.

With the Supreme Court now entering the fray, the NGT order directing the Delhi government and the concerned agencies to introduce the sewerage levy within the next two months is expected to be taken seriously with the action plan being properly followed.