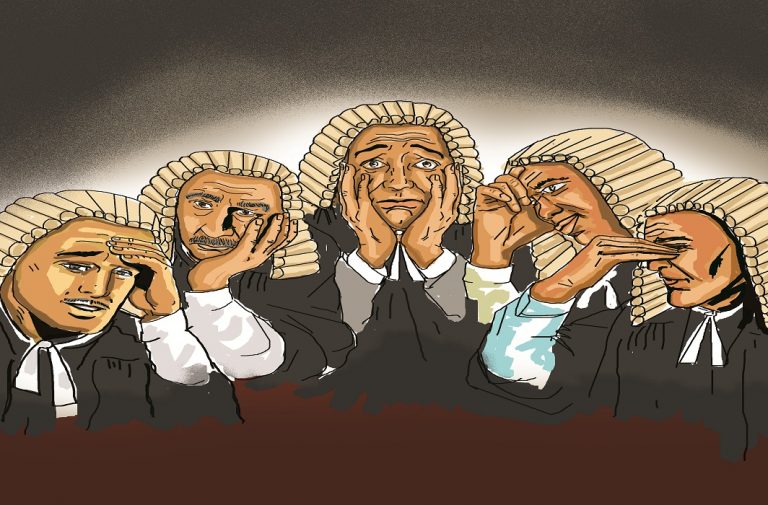 The New Year has ushered in key changes in the Supreme Court with two new judges joining it on January 18. The Chief Justice of Karnataka High Court, Dinesh Maheshwari, and a judge of the Delhi High Court, Justice Sanjiv Khanna, were administered the oath of office by Chief Justice of India Ranjan Gogoi in his Court despite a raging controversy over the merits of the Collegiums’ recommendation to elevate them, overlooking their lack of seniority over other eligible judges.

Critics of the Collegium’s decision alleged that while recommending these two judges for elevation to the Supreme Court, it simply ignored the requirements of law and established conventions. Their grievance was that the Collegium unjustly jettisoned the resolution adopted at its December 12, 2018, meeting in which it had recommended the elevation of the Chief Justice of Delhi High Court, Justice Rajendra Menon, and the Chief Justice of Rajasthan High Court, Justice Pradeep Nandrajog, to the Supreme Court. These two judges were senior to Justices Maheshwari and Khanna, and seniority being an important criterion, the Collegium ought not to have ignored it, it was pointed out.

Conventions and the procedure established by the Supreme Court’s judgment in the Second Judges case, the critics said, require that once the Collegium resolves to recommend judges for appointment, the names are sent forthwith to the government for processing. But the Collegium which recommended certain names in its meeting on December 12, did not ensure that its resolutions were uploaded on the Supreme Court’s website and formally sent to the centre for processing.

The reason, according to the resolution uploaded on January 10, was that the required consultation could not be undertaken and completed as the winter vacation of the Court had intervened. “By the time the Court re-opened, the composition of the Collegium underwent a change. After extensive deliberations on 5th/6th January, 2019, the newly constituted Collegium deemed it appropriate to have a fresh look at the matter and also to consider the proposals in the light of the additional material that became available,” the resolution read.

Justice Khanna was appointed a judge of the Delhi High Court on June 24, 2005, and stood at no. 33 in the combined seniority of High Court judges on an all-India basis. The Collegium said that it was well aware of his seniority in the Delhi High Court also. Justice Khanna will retire on May 13, 2025, and will have a tenure of six months as CJI. This will be after the term of Justice DY Chandrachud as CJI gets over on November 10, 2024. Justice Khanna supersedes two judges of the Delhi High Court, namely, Chief Justice Rajendra Menon and Justice Shripathi Ravindra Bhat. While Justice Menon retires on June 6 this year, Justice Bhat retires on October 20 next year. The age of superannuation for High Court judges is 62, while for Supreme Court judges it is 65. If appointed to the Supreme Court, Justices Menon and Bhat will have tenures of just three-and-a-half and four-and-a half years, respectively.

Although judges have been appointed with such tenures earlier, a judge with a long tenure of five or six years is likely to contribute more to the Supreme Court’s jurisprudence, and can hope to preside over benches, and be a member of the Collegium before his retirement.

Justice Khanna is the nephew of a legendary judge of the Supreme Court, HR Khanna, who gave a landmark dissent in the habeas corpus case during the Emergency, setting aside the centre’s move to suspend the fundamental rights of citizens. Justice HR Khanna resigned when Prime Minister Indira Gandhi appointed Justice AN Ray as the chief justice of India, thus superseding him. Justice HR Khanna also sided with the majority in the landmark decision in the Kesavananda Bharati case, a 7:6 split verdict which held that Parliament does not have the power to amend the Constitution so as to abrogate its basic features.  Irrespective of his illustrious lineage, Justice Sanjiv Khanna’s suitability for joining the Supreme Court in his own right has never been in doubt.

But the controversy over the choice of Justice Maheshwari is not easy to brush aside. He retires on May 14, 2023, a comparatively shorter tenure than Justice Khanna. Besides, his elevation to the Supreme Court was stalled by the previous Collegium when Justice J Chelameswar was its member. Justice Chelameswar opposed his elevation because Justice Maheshwari as chief justice of Karnataka High Court chose to deal with the centre directly rather than through the Collegium regarding the suitability of a district judge recommended for the post of High Court judge. While the Collegium reiterated its recommendation to appoint that judge to the High Court, the centre had some misgivings and asked Justice Maheshwari to inquire into his suitability in view of allegations of sexual harassment against him. The centre’s decision not to go ahead with the Collegium’s recommendation in view of Justice Maheshwari’s report was cited by Justice Chelameswar as adverse material against him.

CJI Gogoi is reportedly of the view that the decision of the Collegium not to recommend a person for appointment does not mean that he is not suitable for all time to come. Decisions of the Collegium could be reviewed by a successive Collegium, and reversed, if need be, he reportedly felt.

While Gogoi may indeed be correct, it is not easy to ignore the aberrations in the process of decision-making by the Collegium which were noticed even earlier. Members of the Collegium are known to let their biases and prejudices regarding those who are eligible to prevail over objective considerations of their suitability for the Supreme Court. This has, in the past, played havoc with a judge’s chances of playing a meaningful role in the Supreme Court, let alone making it as CJI in due course.

In the Second Judges case, the nine-judge bench of the Supreme Court held in 1993: “Inter-se seniority amongst Judges in their High Court and their combined seniority on all India basis is of admitted significance in the matter of future prospects … It is, therefore, reasonable that this aspect is kept in view and given due weight while making appointments from amongst High Court Judges to the Supreme Court. Unless there be any strong cogent reason to justify a departure, that order of seniority must be maintained between them while making their appointment to the Supreme Court … this would also lend greater credence to the process of appointment and would avoid any distortion in the seniority between the appointees drawn even from the same High Court.”

Critics are, therefore, right in asking the CJI and the Collegium whether there is any strong and cogent reason to justify a departure from the order of seniority as envisaged in the Second Judges case, and if so, it must be shared with the public.

But the CJI appears to have taken a stand that disclosure of adverse material against a judge serving in the High Court could compromise his continuance there, and therefore, should be avoided. This reason is convincing if there is supersession of one or two judges, or when a need is felt to elevate a not so senior judge to ensure geographical, social and regional diversity.

But when the list of superseded judges in the all-India list of eligible High Court judges is so huge, as in the present case, misgivings are bound to arise as to whether there are strong and cogent reasons for departing from the principle of seniority.

On January 12, 2018, four seniormost judges of the Supreme Court held a press conference to expose then CJI Dipak Misra’s “less than desirable” way of administering the Court and the Collegium posing a real danger to democracy.

Questions continue to be asked a year after that press conference whether the current CJI Gogoi, who was part of that presser, has taken the necessary steps to inspire the confidence of the public in the Court and made it more transparent.

The recent appointments to the Court are likely to add to the misgivings about the functioning of the Collegium and the apex court.