The 60-page note of the former Arunachal Pradesh Chief Minister has created a sensation in legal and political circles. But does it offer enough evidence to pass the legal litmus test?

~By Ajith Pillai with Bureau Reports

Anti-climax! That succinctly sums up the tame end of Part I of the “Kalikho Pul Suicide Note” saga. It was a crowded Court No 13 that waited in anticipation on the afternoon of February 23 for Justices Adarsh Kumar Goel and Uday Umesh Lalit of the Supreme Court to take up Item No 61 on the cause list. The matter before the two judges dealt with a letter addressed to the Chief Justice of India (CJI), Justice JS Khehar, by Dangwimsai Pul, the widow of former Arunachal Pradesh Chief Minister Kalikho Pul, who committed suicide on August 9 last year.

Before he ended his life, Pul left behind a sensational 60-page diary strangely titled Mere Vichar (My Thoughts), in which he levelled serious charges of corruption and bribery against ministers from his state, senior politicians in Delhi and relatives of sitting and former judges of the Supreme Court. It spared no one, including the highest levels of the judiciary, and the President.

Pul lost his chief ministership when his five-month old government was dismissed by the Supreme Court in July 2016. The following month he committed suicide.

The deceased chief minister’s widow had written to the CJI on February 17, seeking directions to register an FIR based on the allegations in the suicide note. The case was suddenly listed for hearing and Dangwimsai Pul’s letter was taken up as a writ petition. Dangwimsai expected the Supreme Court to either hand over the case to the CBI or set up an SIT to probe the allegations.

But that was not to be. Her counsel, Dushyant Dave, concluded proceedings rather quickly by withdrawing her prayer before the court. It was subsequently “dismissed as withdrawn.” Dave cited reasons why his client was forced to make such a move (see box).  Dangwimsai Pul will have to take her fight elsewhere. She told India Legal that she will “soon be petitioning the Vice-President” since the suicide note also alludes to the President.

While Dangwimsai’s plea in its present form is a closed chapter, the focus still remains on the curious “suicide note” that surfaced almost six months after Kalikho Pul’s death. Several question marks hover over the note. Were the allegations all true? Was it backed by an evidence? Was Pul actually approached by middlemen (in some instances the kith and kin of apex court judges) who were acting on behalf of the honourable judges? When did he write the 60-page suicide note? Was it handwritten or had he got it typed and then signed it? (The copies doing the rounds of the media are typed in Hindi and have his signature at the bottom of every page.)

Why did lawyer Dushyant Dave counsel his client Dangwimsai Pul, the wife of former Arunachal Pradesh chief minister Kalikho Pul, to withdraw the letter she had written to the Chief Justice of India JS Khehar?

She had sought the CJI’s instructions to file an FIR based on the allegations of corruption against several sitting judges of the apex court made in a suicide note left behind by her deceased husband.

Dave’s reasoning was this:

The apex court registry’s explanation for listing the case before a judicial bench was that a registration of an FIR could not be facilitated by an administrative order and could be done only through a judicial order.

When contacted by India Legal, Dangwimsai was measured in her words: “This is a legal matter on which I cannot speak much. But I withdrew my petition because I sought intervention on the adminis-trative side but the matter came up before a bench.”

However, sources say she may have decided to withdraw her petition lest she and a middleman, Shyam Arora, who allegedly had regular financial dealings with Kalikho Pul, be exposed for these shady deals running into thousands of crores. Arora, a Delhi businessman, is untraceable, though Dangwimsai has been trying to get in touch with him.

India Legal tried to make some sense of the curious case of Pul’s “suicide note”. Here are some pointers:

A lawyer who knew him closely had this to say. “He often told me about the diaries. He said he was writing things that would create a sensation. He also talked several times about committing suicide but I dismissed it as loose talk. The diaries were handwritten and written over many months. He never typed himself so he has obviously got it typed by someone.” According to him the original handwritten diaries are with his first wife Dangwimsai. (Pul, who was 47 when he ended his life had married three times. Entering into multiple marriages is not unusual in several tribal communities in the North-east). 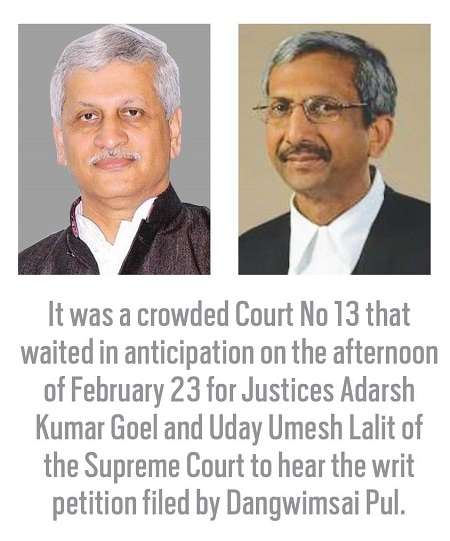 In fact, he was the first to bring the suicide note to light in September last year. It is alleged that he may have done so to rattle the higher judiciary which had come down sharply on his gubernatorial interventions into Arunachal politics which led to Pul, a Congress rebel, becoming CM with the support of BJP MLAs. His actions were dismissed by the court as “unconstitutional” and the Pul government was dismissed.

Can a suicide note be an evidence and can allegations in it against sitting apex court judges be investigated? To proceed against a judge isn’t easy because judges are left to decide their own case

Suicide notes, and their content, are different from dying declarations. Dying declarations enjoy a unique status. It is based on the maxim Nemo moriturus praesumitur mentire, i.e. a man will not meet his maker with a lie in his mouth. Since the situation when a man is on his death bed is so solemn and serene, that is the reason in law to accept in veracity his statement, even dispensing with the requirements of oath and cross-examination. As such, dying declaration is taken a lot more seriously than suicide notes. Suicide notes can be taken as evidence in Court, but not as conclusive evidence.

The question which arises is, can a suicide note be termed to be a valid dying declaration for the police/investigating authorities to act upon. The element of admissibility of such a dying declaration was considered by the Supreme Court of India in Sharad Birdhi Chand Sarda vs. State Of Maharashtra.

The relevant provision in law is Section 32(1) in The Indian Evidence Act, 1872.

“When it relates to cause of death—When the statement is made by a person as to the cause of his death, or as to any of the circumstances of the transaction which resulted in his death, in cases in which the cause of that person’s death comes into question. Such statements are relevant whether the person who made them was or was not, at the time when they were made, under expectation of death, and whatever may be the nature of the proceeding in which the cause of his death comes into question.”

From a review of the various authorities of the Courts and the clear language of Section 32(1) of the Evidence Act, the following propositions emerge:

Thus it is well settled that declarations are admissible only in so far as they point directly to the fact constituting the res gestae of the homicide; that is to say, to the act of killing and to the circumstances immediately attendant thereon, like threats and difficulties, acts, declarations and incidents, which constitute or accompany and explain the fact or transaction in issue.

Section 32 is an exception to the rule of hearsay and makes admissible the statement of a person who dies. Whether the death is a homicide or a suicide, provided the statement relates to the cause of death, or relates to circumstances leading to the death.

In this respect, Indian Evidence Act, in view of the peculiar conditions of our society and the diverse nature and character of our people, has thought it necessary to widen the sphere of Section 32 to avoid injustice.

The first step to resolving anything involving a suicide note requires someone to lodge a first information report (FIR). In the Kalikho Pul case, the allegations are on the Supreme Court’s judges and other prominent political and public figures.

Can an FIR be lodged against incumbent judges and the procedure to be followed in case of serious allegations against the incumbent Judges? In K Veeraswami vs. UoI [1991SCC(3)655], the Supreme Court, while considering the question regarding the applicability of the provisions of the 1947 Act to judges of superior courts, has held that judges of superior courts fall within the purview of the said Act and that the President is the authority competent to grant sanction for their prosecution.

The judgment further said that if the allegations are against the Chief Justice, then the permission required would be of other judges, which would obviously mean the next-most senior judge available.

In the administrative side, the Supreme Court, by a full Court meeting held on December 15 1999, adopted the Report of the Committee consisting of Justice SC Agrawal, Justice AS Anand, Justice SP Bharucha, Justice PS Mishra and Justice DP Mohapatra for the “In-House Pro-cedure” to be followed to take suitable remedial action against judges, who, by their acts or omission or commission, do not follow universally accepted values of judicial life. As per the report, if a complaint is received against a judge of the Supreme Court and the CJI, after examining it, finds the complaint is of a serious nature involving misconduct or impropriety, he shall ask for the response thereto of the judge concerned.

And after his response if he finds that the matter needs a deeper probe, he would constitute a committee consisting of three judges of the Supreme Court to hold an inquiry. If the committee finds that there is substance in the allegations then the CJI shall either advise the judge concerned to resign and if he refuses to resign, he may intimate the President of India and Prime Minister to initiate proceedings of removal.

The Constitution of India, under Article 124 (4),  holds that “A Judge of the Supreme Court shall not be removed from his office except by an order of the President passed after an address by each House of Parliament supported by a majority of the total membership of that House and by a majority of not less than two thirds of the members of that House present and voting has been presented to the President in the same session for such removal on the ground of proved misbehaviour or incapacity.”

The procedure followed to proceed against incumbent judges is a complex one. And judges are left to decide their own case.

Where did Pul, who claimed he comes from a humble background, acquire all that wealth? Also, if he indeed paid crores to fixers and relatives of SC judges as he has alleged in his suicide note, where did he source all those funds from?

Perhaps some clarity will emerge if the middlemen mentioned in the suicide note are questioned. But will their testimonies, unless backed by incontrovertible evidence, prove anything? It remains to be seen if the suicide note will pass the legal litmus test.

The government, India Legal has learnt, is not inclined to move in the matter that could cause much institutional harm to the judiciary. Also, the home ministry is not convinced that the suicide note is a credible enough document. So as things stand, its curtains for now.