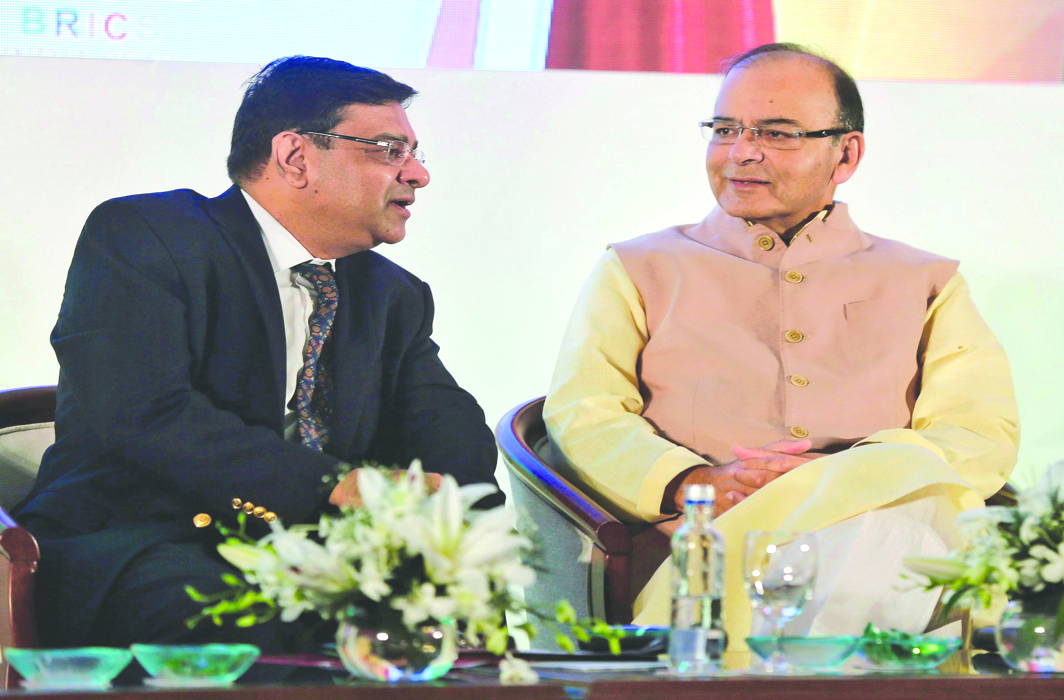 Above: RBI Governor Urjit Patel and Union Finance Minister Arun Jaitley are not on the same page on dealing with the NPA crisis/Photo: UNI

A spat between the RBI and the finance ministry may be the tip of the iceberg in a growing banking crisis. Good governance eludes public sector banks, resulting in NPAs, and the RBI seems to want no part of it

All big disasters start as small events. The recent tsunami that killed over 1,500 people in Indonesia began as a small earthquake in a remote island. In 2005, Hurricane Katrina was a small ripple in the South Atlantic Ocean before it killed 2,000 in New Orleans 10 days later. Research conducted by a group of scientists who replicated avalanches using sand grains found remarkably that it is always a small perturbation in one grain of sand that eventually causes an entire mountain to collapse. They concluded that even the greatest of events have no special or exceptional causes.

There is a striking similarity between avalanches and financial disasters. There is never one great event, but a series of small events that build up to a disaster. Examine the history of stock market crashes and you will notice that the vast majority of them occurred as a result of the accumulation of small and seemingly innocuous events and not as a result of one significant event (the exception being the week after 9/11).

The banking crisis in India has also been building up slowly. There have been small movements of sand over time—the surprise removal of Raghuram Rajan as governor of the Reserve Bank of India (RBI), increasing non-performing assets (NPAs) over time, declining real estate prices, the PNB crisis, PCA (prompt corrective action) on more than half of public sector banks, IL&FS, Non-Banking Financial Companies refusing to give real estate loans, the declining rupee… Taken in isolation, these are all small events, but could eventually cause the mountain to collapse.

The latest of these small events is the public spat between the RBI and the ministry of finance over requiring RBI staff to serve as directors on the boards of public sector banks. The RBI, weary of being made the scapegoat in the NPA problems, wants to distance its staff from the management of public sector banks because if the proverbial “dirt hits the fan”, it does not want to end up as the bogeyman. On the other hand, politicians and career bureaucrats in the finance ministry want to ensure that they can deflect the blame for any crisis. So they are insisting that RBI directors stay on the boards of public sector banks. Like rats jumping off a sinking ship, both sides are positioning themselves to appear blameless if the NPA problem explodes into a full-blown banking crisis. 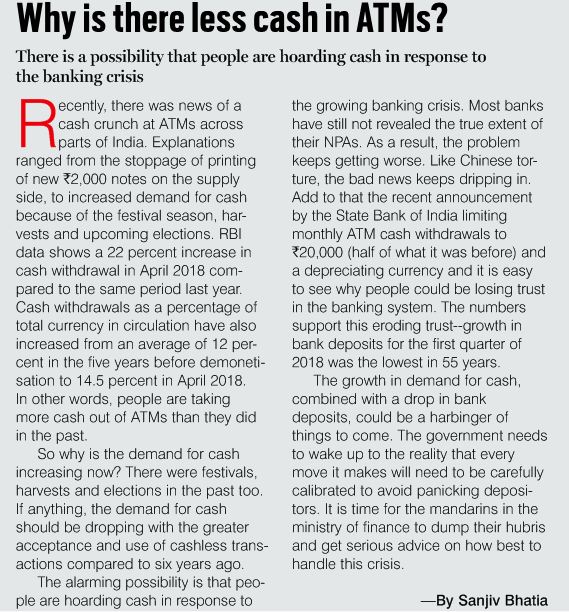 A sound monetary policy is critical to a nation’s economic development. The RBI is responsible for the country’s monetary policy—in other words, managing the currency (and its value) and the credit system of the country. It does this by monitoring and controlling the behaviour and lending practices of all banks in the country.

There are two parts as to how the RBI controls bank behaviour: one is through prudential lending norms and the other, through governance norms. It controls the lending behaviour of banks by setting minimum cash reserve and capital adequacy requirements, and through disciplinary actions like PCA which impose a lending restriction on banks whose capital adequacy ratios fall below norms. The second way in which the RBI controls bank behaviour is by monitoring their governance—that is, by having a say in the appointment of key management staff like the managing director (MD) and chairman.

But currently, there is a dichotomy in the way the RBI interacts with public and private banks. It monitors only the prudential lending and capital adequacy norms for public sector banks, while the finance ministry manages issues related to their governance. The chairman, MD and board of governors of all public sector banks are political appointees. As a result, unqualified people with no banking competence often end up in them.

The situation for private banks is entirely different. The RBI not only provides prudential norms for lending behaviour, but also regulates their governance. It can appoint and remove the chairman, MD and other senior management at the bank. It can even supersede the board of directors, call board meetings and intervene in matters of corporate control (mergers and acquisitions). In a recent case, the RBI denied Rana Kapoor, chairman of YES Bank, an extension because his bank provided misleading information about the magnitude of its NPAs.

The RBI imposes strict ownership guidelines on private banks. Promoter group ownership is limited to 15 percent and individual ownership to 10 percent of outstanding shares. These constraints are designed to prevent concentration of ownership and the risks that can pose in an industry like banking where high leveraging (10 to one) is the norm. In India, because of its bizarre restrictions on stock and bond investing, the vast majority of people have no alternative but to put their entire life savings in bank deposits. So a bank collapse presents a substantial social risk. Good governance in the banking industry is, therefore, an imperative.

It is easy to see from these numbers why India is staring down the barrel of a banking crisis. Remember, these public sector banks control almost 70 percent of the total credit in the Indian economy. It is vital, therefore, that their operations be sound and efficient. The key to this is good corporate governance. Unfortunately, the majority of key management positions at these public banks are political appointees and not people with deep knowledge of capital markets or vast banking experience.

There are two principal causes for the NPA problem: Excessive lending as a result of over-exuberance following the good times from 2004 to 2008 and poor governance and lax oversight by bank management and the board of directors which resulted in large loans to political cronies and shady operators. 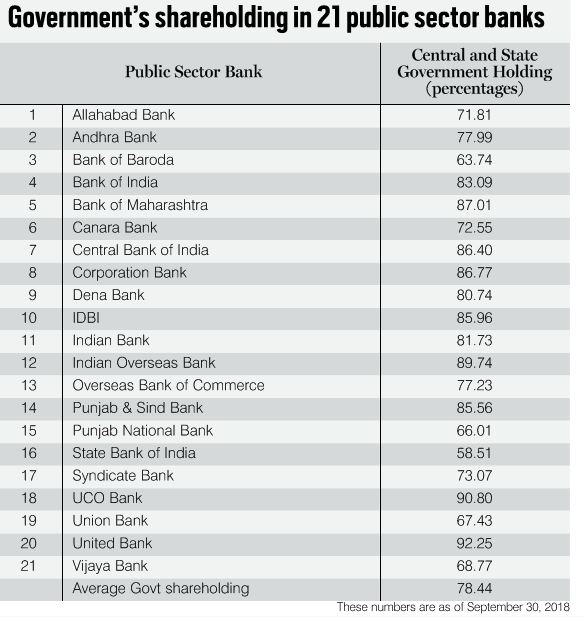 Of the two, poor governance is probably the bigger culprit, and this is apparent in the difference in the bad loan portfolios of private versus public banks. RBI data shows that 17.3 percent of all loans in public banks have turned bad (NPAs), while the corresponding number for private banks is only 5.3 percent. What explains this significant disparity? It can’t be over-exuberance because that is a systemic problem which afflicted both public and private banks equally. Some of this difference may be attributable to the composition of loan portfolios—private banks lend more to retail customers who tend to have lower default rates. But the biggest reason for the high default rate in public banks is poor governance and lax oversight.

Private banks are professionally managed by people who are incentivised to maximise shareholder value and minimise risk. Also, the absence of a large controlling shareholder places checks and balances on their performance. That is not the case with public banks. Their management is deeply indebted to political masters, which leads to cronyism, corruption and underhand quid pro quo deals.  Also, because the government, with its unlimited supply of public funds, provides a backstop to downside risk, there is the problem of moral hazard.

Banking is a highly leveraged business with high upside potential, but also significant downside risks. The managers at public banks engage in riskier loan behaviour because they are assured of government bailouts.

The biggest singular reason for the NPA problem is, therefore, the substantial ownership of banking resources by the government. RBI governors in the past (Venugopal Reddy, Rajan) and present (Urjit Patel) have tried to make the government understand the risks of this approach, but to no avail. In September 2015, Union Finance Minister Arun Jaitley gallantly stated that the government intended to bring its ownership in public banks down to 52 percent. Three years later, that has remained talk. In reality, it is hard for a government to give up control over monetary resources because money assures political power.

But the grains of sand are churning. The blame game between the ministry of finance and the RBI could be the canary in the coal mine. Jaitley may be rueing the fact that he never followed up on his words of 2015. And the RBI wants to ensure that it is insulated from the blame game that will inevitably ensue.

Leave a Reply to Robert A Cancel reply