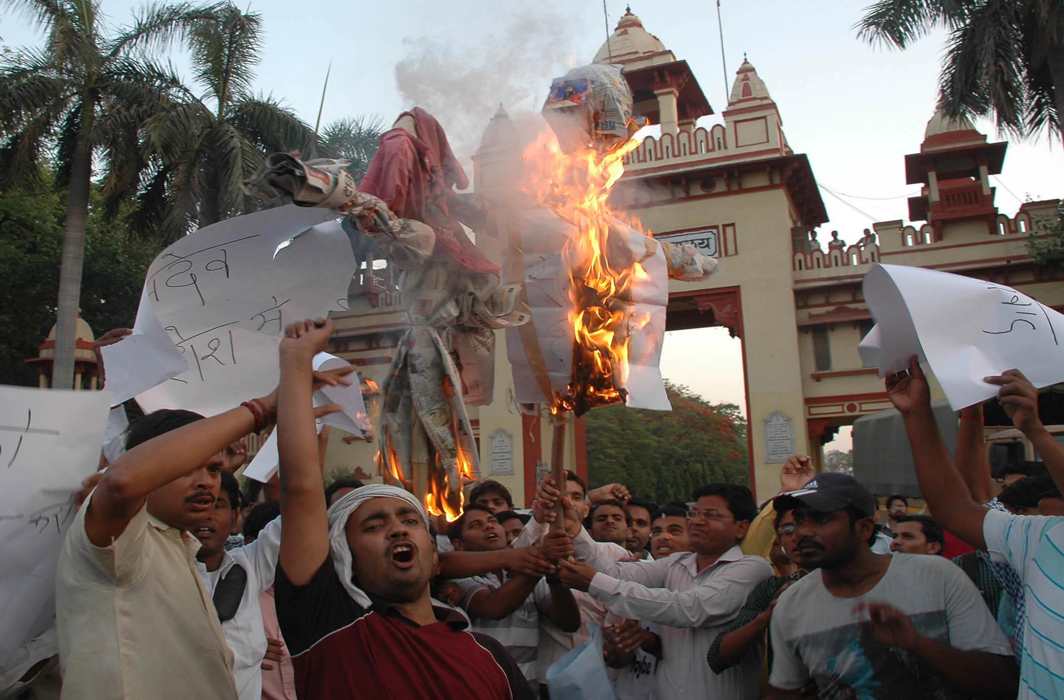 Above: The SC/ST students of Banaras Hindu University on a protest agitation/Photo: UNI

A new University Grants Commission order will reduce representation of Scheduled Castes, Scheduled Tribes and OBCs in all recruitment drives of universities

The contentious issue of reservations, be it in educational institutions or jobs, has once again cropped up. In April 2017, the Allahabad High Court concluded arguments in the case of Vivekanand Tiwari and another Vs Union of India, BHU and others wherein the reservation roster for SC/ST was challenged. Tiwari had challenged a recruitment notice by Banaras Hindu University (BHU), which invited applications from such candidates for the entire university rather than individual departments. He wanted it quashed on the ground that each stream or department should have reservation rather than the entire university as a whole. The Court in its order noted that a “blanket policy of reservation on the cumulative vacancies across all departments defeats the purpose of reservation itself as some departments end up having no reservation at all”.

The Court specifically requested and directed the University Grants Commission (UGC) to examine at least 10 cases in which the Supreme Court had decided that reservation should be applied department-wise and submit its recommendations to the HRD ministry for consideration. This was subsequently used as the basis for a recommendation with far-reaching consequences by the UGC in October 2017. By accepting the UGC’s recommendation now, the HRD ministry has finally sealed the policy. Some say it has, in effect, also sealed the intake of reserved classes into the higher education system in the country.

The HRD’s decision to accept the UGC’s proposal means that for the first time, there is a unified policy for all universities—reservation in faculty positions should be calculated department-wise and not based on the total posts in a university. The UGC chairman refused to elaborate publicly on the issue.

On its part, the UGC was faced with a dilemma: all universities have been applying the constitutionally guaranteed reservation policy on the total number of faculty positions across all streams. In effect, it means that if a university has 100 faculty members, then reservation for SCs/STs would be 22.5 percent of that. In the absence of any clear UGC guideline, universities had been using this blanket method. Aggrieved individuals in at least a dozen cases had approached various high courts and received individual remedies.

The standing committee of the UGC, as directed, discussed about 10 cases decided by the apex court over the years in which the plea by the petitioners had been along the same lines. These cases include the celebrated cases of Dinanath Shukla, 1988, overturned in 2004, and Suresh Ch Verma and Ramniwas Pandey, 1996. In 1988, the Supreme Court had also examined the case of Chakradhar in which it answered the ticklish question of what would be the status of reservation if a department had only one post of professor? Could reservation then be applied? The apex court had decided that any application of the reservation policy would then be a travesty of justice as it would negate the equal opportunity clause as laid down in Article 16 (1) and 16(2) of the Constitution.

The naysayers of the UGC recommendations now claim that SCs/STs will be further pushed back in terms of representation in faculties in higher education. The current representation of SCs/STs/OBCs among teachers in higher education is pretty abysmal. According to a government report released in 2016, seven of every 100 teachers in colleges and universities are from the disadvantaged castes. In absolute numbers, only 1.02 lakh—or 7.22 percent—of the 14.1 lakh teachers in 716 universities and 38,056 colleges in the country are Dalits. Tribals were just 30,000 or 2.12 percent among university faculty.

As per official data, there are 17,106 teaching positions at 41 UGC-funded central universities, of which 5,997 were vacant as of April 1, 2017. This roughly works out to 35 percent. The UGC’s new order announcing a change in the implementation of faculty reservation will significantly reduce representation of SCs, STs and OBCs in all the new recruitment drives taken up by universities in future.

How does this work? For instance, a faculty of arts may have one professor, two associates, one dean, five assistant professors and so on. The faculty will then be able to make reservation of roughly 50 percent for assistant professors and associate professors. The dean and professor, being singular positions, will remain outside the ambit of reservation, according to the rule laid down by the Supreme Court in state of Karnataka Vs K Govindappa.

The contours of the decision by the Allahabad High Court last April were laid down over the years in about 10 cases listed by the Court itself in its judgment. At the same time, the Court rejected a complex roster system for appointments to singular positions within one stream worked out by it in the case of Krishna in 2006.

The roster listed how one position of professor, for instance, can be filled by various caste and tribal candidates through a rotational policy. The same Court pointed out that it may “take centuries” if the roster were to be applied to fill positions.

The UGC has been prompt in accepting the Allahabad HC’s direction and so has the HRD ministry. There will be more debates on the merit of the UGC decision, but for the time being, it appears legally valid.