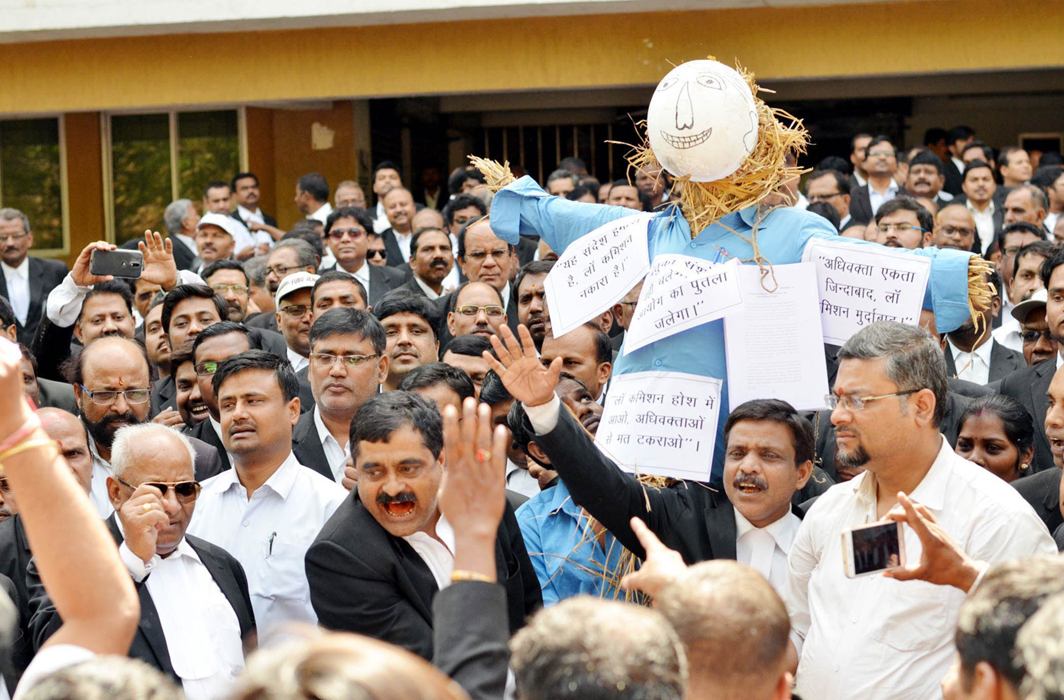 Above: Lawyers in a Ranchi court protesting against the Advocates (Amdt) Bill, 2017/Photo: UNI

Despite court strictures, lawyers in several parts of the country continue to strike work, crippling litigation, causing massive revenue loss and creating a rift between the Bar and the Bench

February 2018: The Calcutta High Court witnessed the longest ever cease work protest in its history with around 11,000 lawyers boycotting work for 71 days.

May 2018: Lawyers of the Rajasthan High Court organised a month-long strike during which they boycotted work, led silent marches and blocked roads in the court premises.

August 2018: Lawyers in Ghaziabad organised a 22-day-long relay hunger strike during which they boycotted courts and got into a scuffle with the police.

September 2018: Odisha dominated news headlines as lawyers engaged in violent acts during a cease work protest which has continued for 34 days despite the Supreme Court directing them to resume work.

More than 150 days have already been lost this year in various courts across the country due to strikes and boycotts by lawyers, causing massive loss of revenue and great inconvenience to litigants. The statistics for previous years are no better. According to the 266th report of the Law Commission of India, between 2011 and 2016, 18 courts in Uttar Pradesh, Tamil Nadu, Uttarakhand and Rajasthan were on strike for an average of around 110 days per year, with several at more than 135 days a year, and one—Muzaffarnagar—at an average of 158 days.

The increasing frequency with which lawyers resort to strikes and boycotts begs the question as to why they indulge in acts which even courts have stated are illegal. As per the Law Commission report, the reasons for lawyers’ strikes and abstention protests organised during the period 2011-16 were hardly justifiable. They included religious occasions such as shraadh, heavy rains, interstate river disputes, earthquake in Nepal, bomb blast in a Pakistan school and even a kavi sammelan. But not all reasons can be considered whimsical or patently untenable. On several occasions, lawyers have taken the recourse of strikes and boycotts as a means to voice their grievances and seek remedial action. Violence against lawyers, especially by the police, demands for greater pecuniary jurisdiction and more circuit benches, outrage against judicial vacancies and expensive court fees are some of the grievances most commonly taken up by lawyers.

This raises a very pertinent question: do lawyers even have a right to call for strike? The Supreme Court and the High Courts have consistently declared that lawyers’ strikes are illegal and that effective steps should be taken to stop the growing tendency. This question was conclusively settled by the apex court, 15 years ago, in Ex Capt. Harish Uppal v Union of India, where it was held that “lawyers have no right to go on strike or give a call for boycott, not even a token strike. The protest, if any is required, can only be by giving press statements, TV interviews, carrying banners and/or placards, wearing black or white or any colour arm bands, peaceful protest marches outside and away from court premises, going on dharnas or relay fasts etc…” It was further held that Courts may turn a blind eye to a protest abstention from work for not more than one day, but only in the “rarest of rare cases” where the dignity, integrity and independence of the Bar and/or the Bench are at stake.

SC’s rap on the knuckles

Time and again, the Supreme Court has chided lawyers for resorting to strikes and holding litigants and the judicial system itself to ransom

In March this year, the above principle was reaffirmed by the Supreme Court in the case of Krishnakant Tamrakar v State of Madhya Pradesh. A division bench comprising Justices AK Goel and UU Lalit held that frequent strikes and suspension of court work by lawyers are illegal as they seriously obstruct access to justice. Going a step further, the bench also said that such actions amount to contempt of court, and therefore, office bearers of the associations who give calls for strikes are liable to be restrained from appearing before any court for a specified period determined by the chief justice of the concerned high court and may be removed from their position forthwith unless the chief justice of the concerned high court permits otherwise. Further, the bench called for enacting legislation to check the malady of frequent strikes and directed the ministry of law and justice to submit quarterly reports on lawyers’ strikes, abstention from work, loss caused and action proposed in response to such events.

Predictably enough, the legal fraternity across the country reacted sharply to the Supreme Court ruling. As a mark of protest, the Bar Council of India (BCI) has called for a nationwide demonstration later this month and has requested active participation from all the State Bar Councils. Last year too, the BCI had organised a similar protest, after the Law Commission recommended that the Advocates Act, 1961, be amended to impose a ban on lawyers’ strikes and suggested other measures for the regulation of the legal profession. 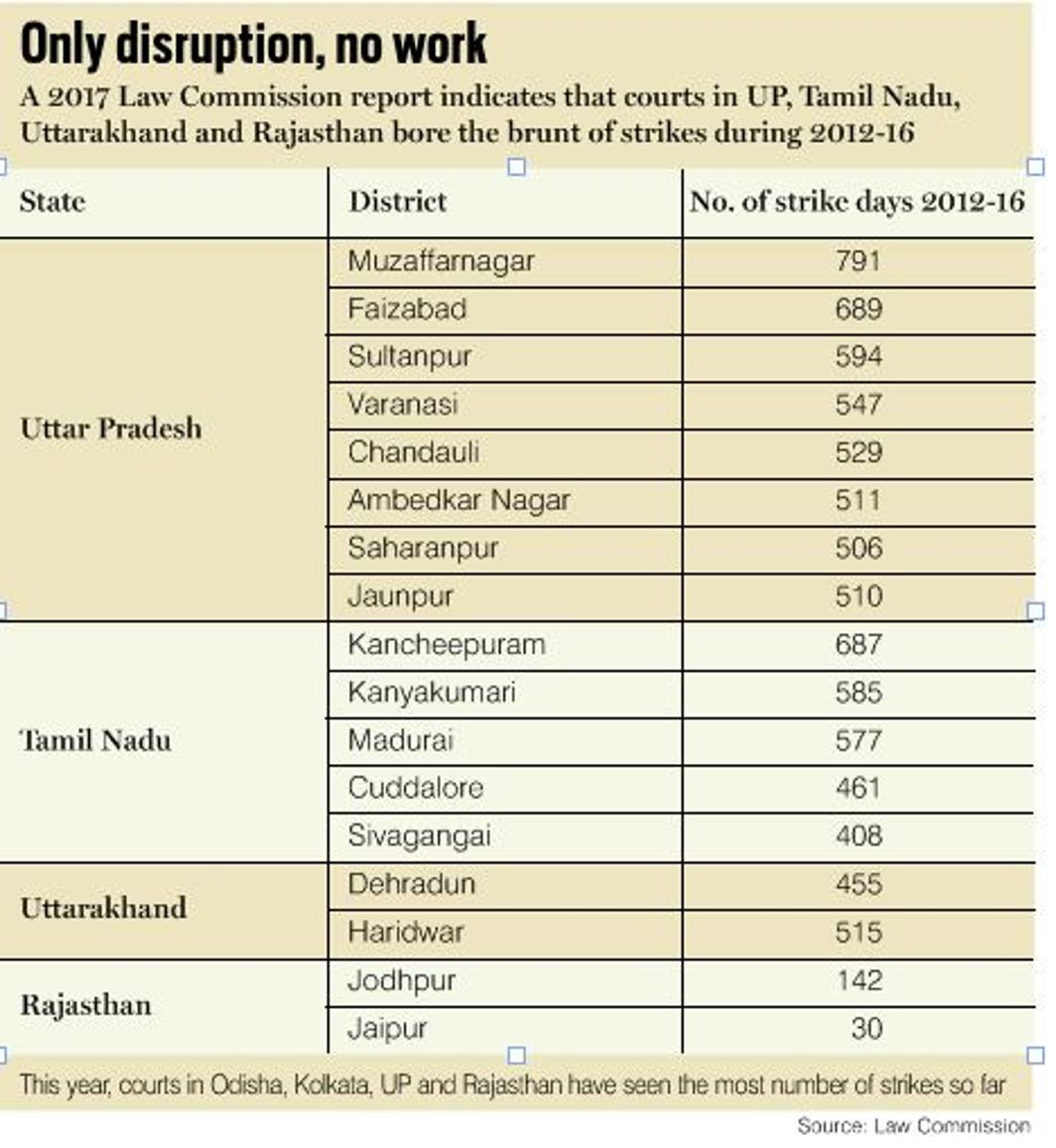 Murari Tiwari, former secretary of the Delhi Bar Council, told India Legal that lawyers are feeling aggrieved over the Supreme Court judgment because abstention from work is their only means of protest against atrocities committed against them by the police and against executive decisions that affect their profession. He said: “The Supreme Court’s order to initiate contempt proceedings against office bearers of the associations who call for strikes is simply not fair. While the tendency of some lawyers to boycott work for months on end is disturbing and should be curbed, the executive and the judiciary are also to be blamed. They ought to adopt a proactive and genuine approach in hearing out the concerns raised by lawyers and addressing them on a timely basis.”

It comes as no surprise then that lawyers’ strikes have continued unabated, in flagrant violation of the Supreme Court’s decisions. As a result, this issue has remained a cause of perpetual tension between the Bar and the Bench. In the interest of ending the impasse, should the executive and judiciary explore other ways to tackle the issue while giving supremacy to the litigants’ right to speedy trial? Have the Courts taken too simplistic an approach on an issue that merits more nuanced deliberation? Is it fair to deem all the grievances raised by lawyers as unworthy of protest and impose a complete embargo?  Shouldn’t the BCI play its part in better regulation of the legal profession and take appropriate action against unruly lawyers during strikes? Perhaps these questions deserve more dialogue and engagement than they have so far received. One thing is for certain, this issue is unlikely to die down anytime soon, and in the foreseeable future, men and women will don black not to seek justice for their clients but for themselves.