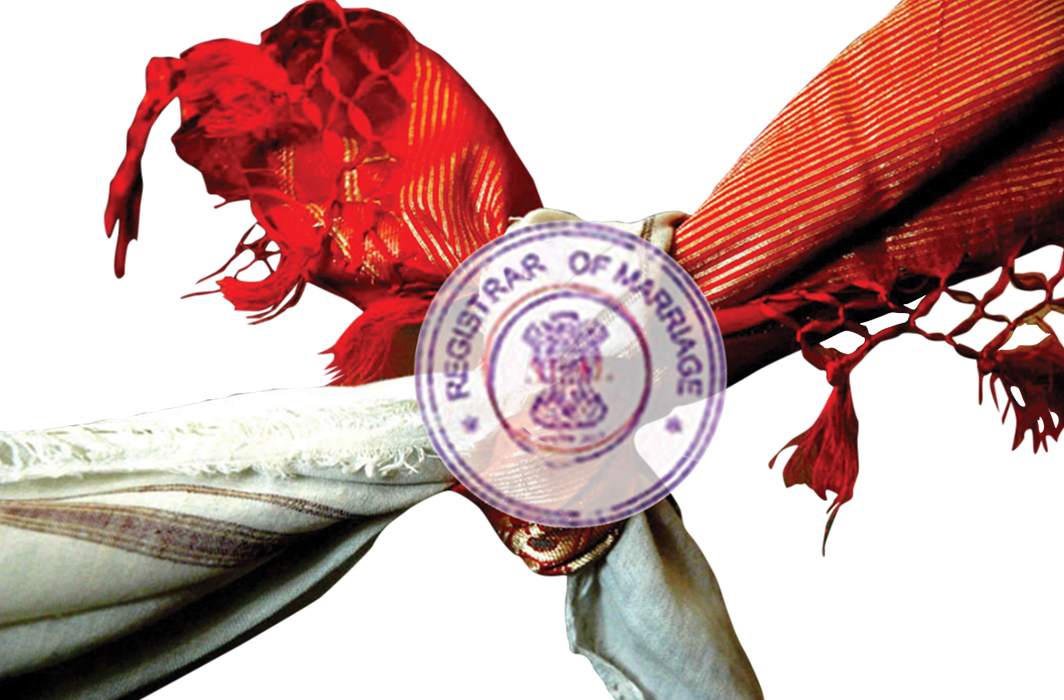 The Law Commission has recommended that a marriage certificate be made mandatory to give weddings legal sanctity. Will this clash with existing family laws and customs?

Similarly, Manira and Nikhil Srivastava (names changed), married for 22 years, never felt the need for a certificate. The fact that their wedding was solemnised in the presence of 400 guests—and they had albums full of photographs—was proof enough for them that they were married.

But things may change. Marriages may be made in heaven but they have to be notified in a registry.

In fact, if the recommendations of the Law Commission of India, proposed this July, are accepted by the government, and a law is brought into effect, then every couple will have to get a certificate of marriage within three months of their marriage, irrespective of one’s caste, creed or religion. The objective is to protect women from fraudulent marriages and ensure them their due when it comes to succession.

The legal fraternity has welcomed the recommendations, calling it pro-women. Former Chief Justice of Chhattisgarh High Court, Justice Yatindra Singh, says it will provide women more security. Former acting Chief Justice of the Gauhati High Court, Justice Sreedhar Rao, says that society has changed and the marriage certificate helps in reducing complications if a marriage goes wrong and there is litigation. “It’s a prime facie evidence to prove that a marriage took place,” he says.

And marital dispute cases are on the rise, necessitating documentation. A report in The Indian Express in Febru-ary—“Kerala tops states with pending matrimonial cases in family courts”—reveals that there are 52,000 cases awaiting adjudication as of November 2016 in India’s most literate state; followed by Bihar with 50,847, and Madhya Pradesh, 46,866 cases. This figure does not include the 43,914 cases disposed of by Kerala in 2013, 53,564 in 2014 and 51,288 in 2015.

Justice Ravinder Singh of Allahabad High Court says that typically these are cases of the man reneging on marriage or remarrying while the first wife is still alive; denying maintenance to her and a share of the property to her children or committing fraud to immigrate and leaving the spouse destitute in an alien land.

The Law Commission, in its report No 270, states that “child marriages, bigamy and gender violence continue to persist in our society, despite legislations prohibiting and penalizing such practices. Several disputes are pending before the courts regarding matrimonial status of the parties. Women are often denied the status of wife due to the absence of record proving a valid marriage…. Compulsory registration can serve as a means to ensure that conditions of a valid marriage have been performed.”

The Commission’s report sites Seema vs Ashwani Kumar transfer petition in Supreme Court (2006), in which the National Commission for Women stated in its affidavit that compulsory registration of marriages would be of critical importance to various women-related issues such as: (a) Prevention of child marriages and to ensure minimum age of marriage; (b) prevention of marriages without the consent of either or both the parties; (c) checking illegal bigamy/polygamy; (d) enabling married women to claim their right to live in the matrimonial house, maintenance, etc.; (e) enabling widows to claim their inheritance rights and other benefits and privileges which they are entitled to after the death of their husband; (f) deterring men from deserting women after marriage; (g) deterring parents/guardians from selling daughters/young girls to any person including a foreigner, under the garb of marriage.

The need for compulsory registration of marriages has not been lost on lawmakers and the legal fraternity, but considerations of religion and customs often come in the way. While the traditional line of thinking is that time-tested customs and rituals are enough proof, the legal view is different.

The following legislations have so far provided for certification of marriages, though not necessarily as a mandatory requirement:

India has also signed the Convention on the Elimination of All Forms of Discrimination against Women in June 1980, and ratified it in 1993. As a signatory to this Convention, India is expected to enact legislation for compulsory registration of all marriages, and the Committee on Elimination of Discrimination against Women, in its report in 2014, reminded the Indian government of this requirement.

The Supreme Court also emphasised the need for mandatory marriage certification in Seema vs Ashwani Kumar, observing that marriages of all persons who are citizens of India belonging to various religions should be compulsorily registered in their respective states. “Further, as and when the Central Government enacts a comprehensive Statute, the same shall be placed before the Court for scrutiny.”

In response to the apex court’s observations, several Indian states have enacted laws to make marriage certification mandatory. Punjab, Delhi, Haryana, Meghalaya, Uttarakhand, and Rajasthan among others, have brought in necessary legislation. Thus, the Punjab Compulsory Registration of Marriages Act, 2012, provides for compulsory registration of marriages solemnised within the state under any law, irrespective of religion, caste or creed. Similar acts apply in Uttarakhand, Rajasthan, Meghalaya, Tamil Nadu and Madhya Pradesh. In Uttar Pradesh, passing the Compulsory Marriage Rules is being considered.

At the same time, in its 211th Report, the Law Commission proposed that a “Marriage and Divorce Registration Act” be made applicable to the whole of India. It recommended that the 1886 Act be repealed, and the 1969 Act be amended to be called “Births, Deaths and Marriages Registration Act, 2012”. A bill to this effect was tabled in parliament, and was passed by the Rajya Sabha in August 2013. But it lapsed when the 15th Lok Sabha was dissolved in February 2014.

Rules pertaining to registration of marriage in some countries:

In 2015, the Legislative Department of parliament, prepared a fresh draft of the Registration of Birth and Death (Amendment) Bill, 2015. And in February 2017, the Department requested the Law Commission to examine and prepare a report on whether to amend the 1969 bill or to come up with a separate standalone legislation, and whether amendments are also required in the laws governing Hindus (Hindu Marriage Act, 1955), Parsis (the Parsi Marriage and Divorce Act, 1936) and Christians (Christian Marriage Act, 1872).

The Law Commission has recommended amendment to the 1969 bill, and introducing a penalty in case of non-registration of marriage without a reasonable cause. Pertinently, the Commission also noted: “The recommendation is not aimed at eliminating diversity of personal laws and instead accept prevailing customs/ or personal laws concerning the solemnization of marriage….”

This raises an important issue—how will the new legislation be compatible with prevailing customs and contradictions in the various laws?

One contradiction is regarding the legal age for marriage. In the Court on its own motion (Lajja Devi) v State (NCT of Delhi), the Delhi High Court pointed out the contradicting legislations in this regard. As per Section (III) of the Hindu Marriage Act, 1955, the legal age for marriage is 18 for girls and 21 for boys; the Muslim Personal Law states that the right age for marriage is when a person attains puberty. However, Sections 11 and 12 of the Hindu Marriage Act state that marriage of a minor is not voidable, only liable to fine. And Section 3 of the Prohibition of Child Marriage Act states that a marriage of a minor is voidable if either of the minors exercises that option.

Pointing out that compulsory registration of marriage will also entail stating the age of the couple, the Law Commission poses the question: “… when it comes to compulsory registration of marriage, should the law encourage this tacit compliance of child marriage by allowing these ‘valid’ marriages’ under various personal laws to get registered, or should the law not register these marriages, where turning a blind eye … would actually let the activity continue unregulated?”

The move will also require creation of suitable infrastructure. Justice Ravinder Singh, former judge, Allahabad High Court and chairman, UP Law Commission, while seeing merit in making registration mandatory, says it will require posting of a registration officer at block and tehsil level too. The Law Commission has recommended making an online portal for registration, and making available the forms online. This will require awareness creation and logistical and technological support at the local level.

More important, it will require a shift in attitude. Doubts are being raised about the need to make registration mandatory. The All India Muslim Personal Law Board, in a statement, has passed a resolution that the Nikaahnama should be treated as a marriage certificate. But Justice Ravinder Singh says it will help Muslim women too, who are also duped. Justice Yatindra Singh seconds him, saying every reform faces opposition from some quarters.

The government would do well to set concerns regarding compatibility between prevailing customs and the mandatory marriage certificate to rest while passing the required legislation.