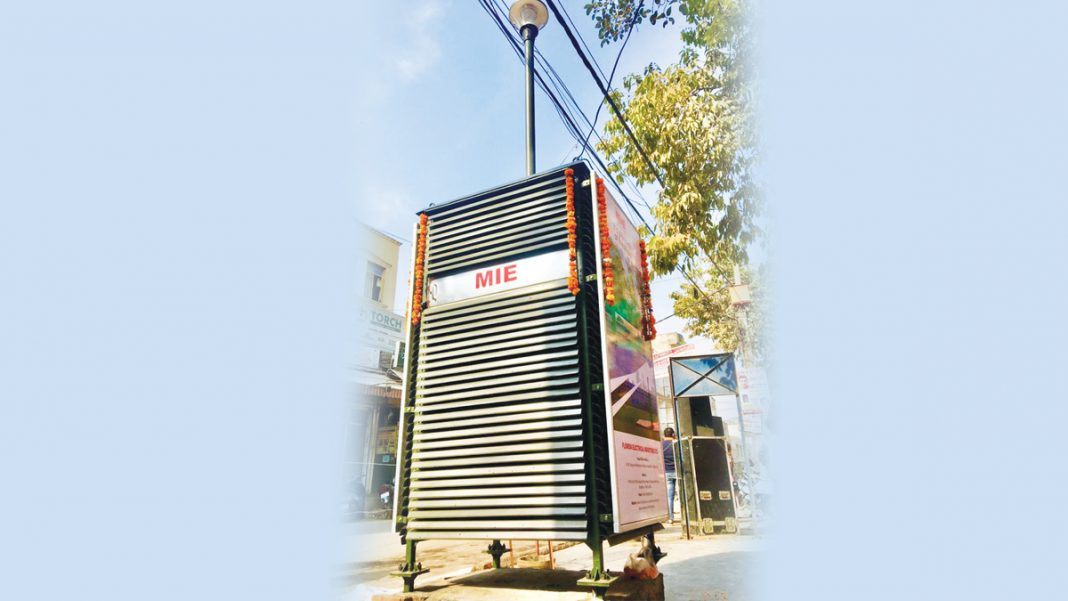 Yet another smog tower has come up in Delhi after much delay to battle air pollution. This was after a Supreme Court order and a warning that any violation would be treated as contempt.

On November 12, 2020, a first of its kind giant air purifier was installed in Gandhi Nagar market, famous as Asia’s largest readymade garments and textile hub. The 12-ft-high air purifier which will cover an area of 1,000 sq m and deliver two lakh cubic metres of clean air everyday, was funded by East Delhi MP Gautam Gambhir. Two more air purifiers will be installed.

Gambir reportedly said: “I know these air purifiers will not solve the problem completely but something has to be done. They will have a major impact on people living nearby.” He wondered why the Delhi government had not banned crackers throughout the year when it knew the air quality of the city was so bad. “Why ban them only before festivals?” he asked.

In January, as a pilot project, Gambhir had inaugurated a smog tower in Lajpat Nagar’s Central Market. Following a positive response from people there, Gambhir decided to instal more air purifiers in markets across East Delhi. In terms of technology, the new purifiers are more advanced and have additional features like high mast lights.

It was in January that the Supreme Court had given its nod to the centre’s proposal of installing smog towers to curb rising pollution levels in the NCR. On January 13, the Court asked the Central Pollution Control Board to instal smog towers in Connaught Place and Anand Vihar within three months. But no proper steps were taken to do so. This was noted by the Court, which said: “Since steps are being taken and undertakings have been furnished, we have not proceeded for violation of the order passed by this court, only on the basis of the action taken and undertakings furnished to complete the project. Let the project be positively completed within 10 months.”

On August 31, the Ministry of Environment, Forests and Climate Change, the Department of Environment and Forests and the Delhi government submitted undertakings before a bench of Justice Arun Mishra of the Supreme Court that they would complete the task within a fixed time frame. The bench said: “Undertakings are taken on record. Any violation on any ground whatsoever shall be treated as contempt of the order passed by this court as there is already huge unjustified delay in making the compliance of the order.”

Four decades ago, India passed the Air (Prevention and Control of Pollution) Act, 1981, which aimed at preserving air quality and controlling pollution. The law gave enormous powers to central and state governments to take necessary action to improve air quality by enforcing pollution control measures, shutting down errant industries and sending culprits to jail. Unfortunately, very few cases were filed under the Act.

According to the World Health Organisation, 4.2 million people die every year as a result of exposure to outdoor air pollution, with nine out of 10 people on the planet breathing polluted air. Even large scale adoption of green energy won’t be enough to immediately reduce the risk of lung disease, stroke and heart disease due to polluted air.

In 2018, the world’s largest air purifying tower was unveiled in Xian, China. The 328-foot tower produces clean air and uses solar power to heat polluted air that is sucked into glass rooms that function as greenhouses. The hot air moves up the tower, passing through a series of filters before finally being emitted as clean air. Since then, the tower has produced 353 million cubic feet of clean air per day, drastically improving air quality in the area. Apart from China, smog towers have been experimented with in recent years in cities in the Netherlands, South Korea and Poland. In fact, the first such tower was erected in 2015, in Rotterdam, Netherlands, created by Dutch artist Daan Roosegaarde.

However, smog towers are not the ultimate solution to deal with pollution as the initial costs are very high. It would require large funding to mass produce them. It also covers only a small area. But they can be useful in areas of very high air pollution. These towers can be used in open public places such as gardens and green areas where people gather for fresh air. It also works on less power so there is no need for any special arrangements for a power source.

According to TERI, the following are the sources for air pollution within Delhi: transport sector (39 percent in PM 2.5 emissions), biomass burning (seasonal open fires, cooking, heating that adds to 20 percent), industries (up to 20 percent), soil and road dust (15 percent), diesel generators and open waste burning (15 percent each) and power plants (5 percent).

Some of the immediate measures that can be taken include stopping usage of all diesel generators, driving strict policies to curb construction dust and force industries to adopt methods that don’t release any pollutants into the air. All these measures can bring down at least 50 percent of air pollution in Delhi. In addition, there should be more emphasis on adoption of electric vehicles that can reduce vehicular emission by a significant margin.

While there has been a lot of discussion on stubble burning as a major source of pollution, this phenomenon is only a seasonal activity. The air quality in north India is bad and polluted more or less throughout the year. There is continuous increase in emissions, and no matter how many smog towers are installed, there will be negligible reduction in air pollution.

In 2016, the Centre for Science and Environment published a study wherein it stated that air pollution laws in India were “more than adequate” to improve air quality. Therefore, their proper implementation is imperative to emerge from this deadly menace.

Read Also: Supreme Court dismisses plea by Volkswagen to quash FIR against it

Did you find apk for android? You can find new Free Android Games and apps.
Share
Facebook
Twitter
Pinterest
WhatsApp
Previous articleKerala social media ordinance: Should such a law not be the Centre’s prerogative?
Next articleBCI allows MP lawyers with provisional licence to practice till bar exams are held again