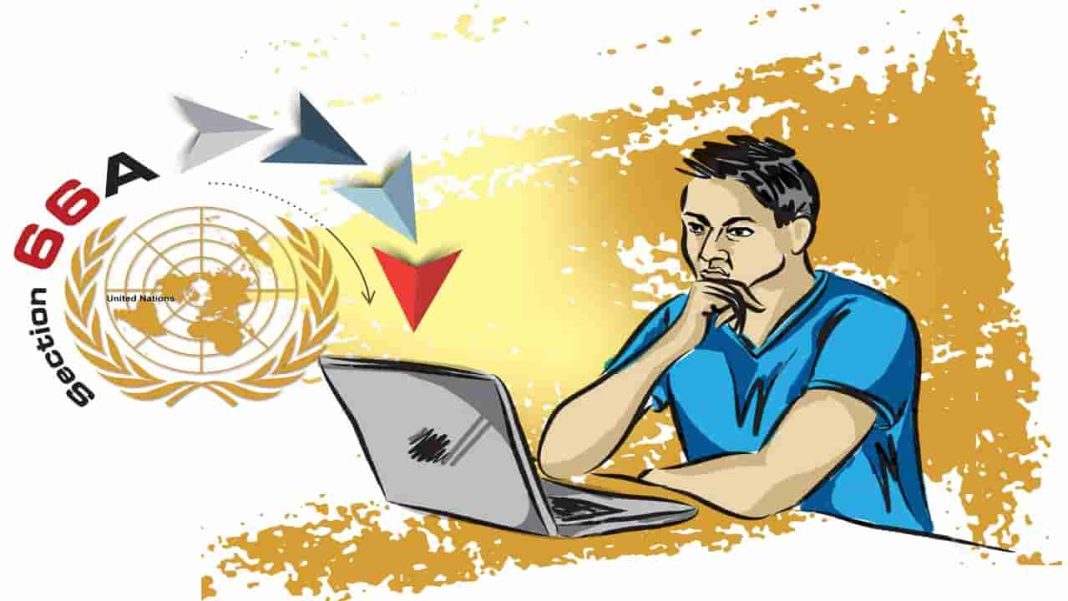 If one thought this Section was axed, think again. A delegation to the UN has resurrected measures almost similar to the banned Section 66A regardless of what the Constitution and the Courts say

In a shocking development, a delegation to the UN proposed the use of measures that are almost identical to those in the controversial Section 66A of the Indian Information Technology Act. This occurred in Vienna at the second session of the UN-organised international convention on countering the use of information and communications technologies for criminal purposes.

The Indian delegation included officials from the external affairs, home and IT ministries. Set up by the terms of a UN General Assembly (UNGA) resolution approved in May 2021, the ad-hoc committee is supposed to submit a draft convention on countering cybercrime to the General Assembly’s 78th session in 2023-24. If passed, it will be legally binding on all member nations of the committee.

The return of Section 66A is bound to lead to further restrictions and keep people from posting critical remarks on the workings of the government. Incidentally, the Supreme Court had knocked out Section 66A from the IT Act, seven years ago. However, the centre is trying to bringing the provisions of the controversial Section back into operation through the backdoor. The backdoor happens to open into the front door of the United Nations. And the UN right now is engaged in talks to draw up a new UN treaty on fighting cybercrime.

According to reports, India has forwarded its own “criminalisation of offensive messages” protocol to the UN, and has done a pretty good job of copy-pasting Section 66A’s language. This is the very same language that was used to haul up anti-government activists, including cartoonists and students.

Retired Supreme Court Justice Madan B Lokur told a news portal that it was “beyond shocking that the government is trying to introduce Section 66A through backdoor legislation”. He wondered who the government was sending a “message” to—the apex court, constitutional law experts, or “freedom of speech supporters”. Perhaps, to all and sundry, “regardless of what the Constitution and the Courts may say”, he said.

Since May-end, a panel of UN experts has been studying the different provisions of “criminalisation of cybercrime”. As part of the exercise, UN member states were asked to submit suggestions on “criminalisation, general provisions, and procedural measures/law enforcement”. India made its submissions on 13 categories of offences, including damage to computer systems, cyber terrorism and child pornography. “The Indian proposal lists ‘Sending offensive messages through communication devices, etc.’ in Section 4(d).” It then defined criminality in three ways:

a) offensive information, and that which is “menacing in character”
b) false information disseminated for “causing annoyance, inconvenience, danger, obstruction, insult, injury, criminal intimidation, enmity, hatred or ill will, persistently by making use of such computer resource or a communication device”

This is language that is not different from that of the axed Section 66A, a copy-paste job. In fact, “Section 4(d) in India’s submission is an exact replica of the language used in the erstwhile Section 66A of the Information Technology Act.”

The Supreme Court had struck down Section 66A on March 24, 2015. Section 66A was introduced in 2008 and was widely misused by law enforcement agencies. There was a glaring ambiguity in terms such as “offensive” and “menacing in character”. These gave the agencies extraordinary powers to lodge cases and arrest anyone. The order was passed by a division bench of Justices J Chalemeswar and RF Nariman, who termed Section 66A “unconstitutionally vague” and “struck down in its entirety being violative of Article 19(1)(a) and not saved under Article 19(2)”. Today, seven years on, the UN has received India’s proposal to use the same language in the new UN convention.

In July 2021, it was learned that despite its constitutional end, Section 66A was still being used, and as many as 1,300 cases had been lodged under its provisions after its annulment.

According to delegates at the committee’s ongoing convention, India’s proposal has been met with opposition by major members. The EU opposed India’s suggestion, saying that it is an “infringement on the freedom of expression and would therefore not constitute a universally recognised relevant offence for others”. On similar lines, the UK delegation said that there was not “sufficient justification” for considering the proposal that “risks infringing rights of expression”. Delegates from Georgia and Luxembourg too took a similar stance. El Salvador said that its domestic rules only apply to offensive messages which can pose a risk to children, while Nigeria said it only has civil remedies for such an offence and not criminal ones.

So far, no country has supported India’s proposal on creating offences in domestic legislation for sending “offensive messages” through a communication service. In particular, the delegation from Russia said that it needed more time to think about India’s proposal, and China did not engage with the proposal at all, according to delegates at the convention.

Apart from the aforesaid controversial suggestion, the Indian delegation has also suggested that all member nations adopt legislative measures which penalise and criminalise a private or a public company that deals in sensitive personal data and is negligent in implementing and maintaining reasonable security practices and procedures and thereby causes wrongful loss or gain to any person.