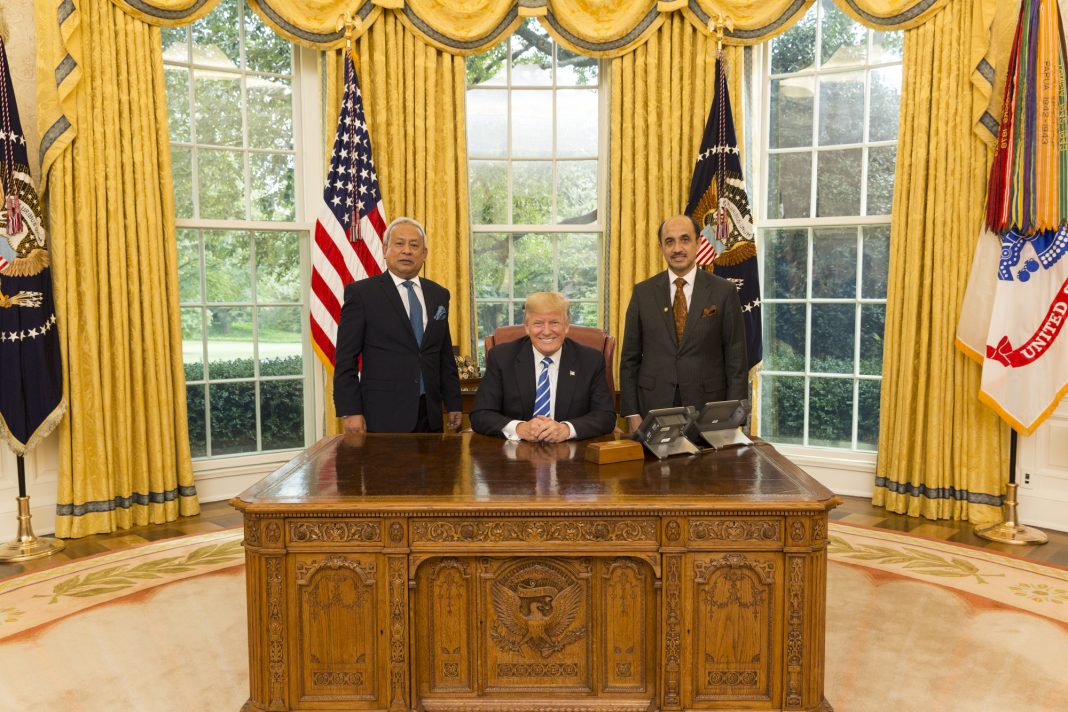 The pardoning spree by the US president has gone to absurd lengths and there is speculation he may even pardon himself, thereby kicking in a constitutional crisis. This power now needs wholesale legal engineering.

No other American president has brought the institution of presidency to such great public ridicule as the 45th one, Donald John Trump. American constitutional history reveals that the only issue which troubled the delegates at the Philadelphia Convention related to the presidency.

The pressing need to have an “energetic yet dignified” executive capable of enforcing national laws firmly, and one who would lend a note of stability to the new government was the dominant consideration. While some delegates at the Convention favoured a plural executive, others opted for a one-man executive. The final decision on the presidency was hence the result of a compromise.

The president was to be single and independent of the legislature. As a result, Article II Section 2 of the Constitution, dealing with the executive powers of the president, was drafted. The Article read: “The President shall be Commander in Chief of the Army and Navy of the United States, and of the Militia of the several States, when called into the actual Service of the United States; he may require the Opinion, in writing, of the principal Officer in each of the executive Departments, upon any Subject relating to the Duties of their respective Offices, and he shall have Power to grant Reprieves and Pardons for Offenses against the United States, except in Cases of Impeachment.

“The President shall have Power to fill up all Vacancies that may happen during the Recess of the Senate, by granting Commissions which shall expire at the End of their next Session.”

Under the constitutional scheme, therefore, in matters of execution of treaties and other executive appointments, the powers of the president were not made absolute and unbridled but were controlled by the senate. However, when it came to the grant of reprieves and pardons, it was made absolute, i.e. uncontrolled by any other organ of the State such as the legislature or the judiciary.

The only limitation for its exercise was that such powers could be exercised only for federal offences and not for cases of impeachment. The Senate, House of Representatives as well as the courts, were thus made “neither a driver, nor a brake and not even a spare wheel” in pardon matters.

The Founding Fathers of the American Constitution had their own ideas about how the pardon process should work. Alexander Hamilton provided the most famous rationale for the clemency power. In Federalist Paper No. 74, he reasoned: “Humanity and good policy conspire to dictate, that the benign prerogative of pardoning should be as little as possible fettered or embarrassed. The criminal code of every country partakes so much of necessary severity, that without an easy access to exceptions in favor of unfortunate guilt, justice would wear a countenance too sanguinary and cruel. As the sense of responsibility is always strongest, in proportion as it is undivided, it may be inferred that a single man would be most ready to attend to the force of those motives which might plead for a mitigation of the rigor of the law, and least apt to yield to considerations which were calculated to shelter a fit object of its vengeance.”

He added that the reflection that the fate of a fellow creature depended on his sole fiat, would naturally inspire scrupulousness and caution and the dread of being accused of weakness or connivance would beget equal circumspection. “On the other hand, as men generally derive confidence from their numbers, they might often encourage each other in an act of obduracy, and might be less sensible to the apprehension of suspicion or censure for an injudicious or affected clemency. On these accounts, one man appears to be a more eligible dispenser of the mercy of government, than a body of men.”

He further wrote that it is not to be doubted that a single man of prudence and good sense is better fitted to balance the motives which may plead for and against the remission of the punishment, than any numerous body whatever.

The framers of the American Constitution had their own compulsions for arriving at such conclusions. The debates of the Philadelphia Convention record that the majority was completely overawed by the personality, statesmanship, wisdom and sagacity of George Washington—the commander-in-chief of the Union Forces and the president of the Constitutional Convention—who went on to become the only uncontested president of the American Republic for two consecutive terms.

The delegates felt that the nature of any chair will be what the incumbent, i.e. a president like George Washington, would make it and therefore, restrained themselves from tinkering with the pardon power or even attempting to regulate it in any manner.

George Mason, representing the state of Virginia, however, thought otherwise and dissented. He circulated his “Objections to this constitution of government in Philadelphia”.

On the afternoon of June 18, 1788, Mason rose from his chair on the floor of the Virginia Ratifying Convention bedevilled by what he thought was the Convention’s failure to understand—the president of the United States might not always be someone of sound character and high intelligence. There would rarely, if ever, he reminded the delegates, be a commander-in-chief with the courage and rectitude displayed by George Washington during the War of Independence. There might even be a president who would try to change our form of government. The president, argued Mason, “ought not to have the power of pardoning, because he may frequently pardon crimes which were advised by himself. It may happen, at some future day, that he will establish a monarchy, and destroy the republic. If he has the power of granting pardons before indictment, or conviction, may he not stop inquiry and prevent detection? The case of treason ought, at least, to be excepted. This is a weighty objection with me”.

What really set Mason apart from the other founding fathers and what keeps him in a sense less well-known than many others is that he vehemently objected to the overwhelming powers granted to the new government and especially the president. This he believed to be ill-defined and overzealous. He even went to the extent of saying: “I would sooner chop off my right hand than put it to the constitution as it now stands.”

In retrospect, however, now it appears that the fulminations of George Mason were prophetic. The presidential pardoning spree by Donald Trump appears to be never-ending and there is widespread speculation that he may go to absurd lengths by pardoning himself, burying the rule of law and principles of natural justice, thus kicking in a constitutional crisis.

Legitimate prosecutions have been scuttled, thanks to the pardon power. Trump has pardoned Charles Kushner who served two years’ imprisonment and had pleaded guilty to 16 counts of tax evasion, only because he happened to be the father of his son-in-law Jared Kushner. Overriding the Justice Department and the Pardon Attorney office and riding roughshod, Trump has also pardoned felons like Paul Manafort and Roger Stone.

The American president has thus thrown all caution to the winds. Showing disrespect to decisions of the American Supreme Court, Trump has also overlooked the longstanding and well established twin rationales of “mercy and public good”.

Far back in time, from 1833 in the case of Biddle vs Perovich 32 U.S. 150, the Supreme Court has described the pardon power as “part of the Constitutional scheme” and characterised clemency as a decision to be guided by “public welfare.” In 1868 in the case of Ex parte Garland 71 U.S. 333 (1866), the Court gave a liberal and expansive construction to the pardon power of the president and held: “It extends to every offence known to the law, and may be exercised at any time after its commission, either before legal proceedings are taken or during their pendency, or after conviction and judgment. The power is not subject to legislative control.” In the case of United States v. Wilson 274 U.S. 480 (1927), reiterating the same reasoning, the Court described a pardon as an “act of grace”.

It needs no mentioning, therefore, that in the light of the recent abuses, the exercise of pardon power by the American president warrants wholesale legal engineering. Clemency scholars and political commentators in the US have felt that there is an urgent requirement to address the issue.

Several suggestions have been floated. Many suggest that the pardon attorney’s office should be relocated to the Executive Office of the president, which would eliminate the contradiction inherent in a Justice Department responsible for both prosecuting offenders and deciding whether they deserve mercy. Some law professors have also argued for replacing the pardon attorney with a diverse “clemency commission” relying heavily on data, existing apart from the Justice Department.

Be that as it may, and no matter what the future portends, the new system needs to establish a regular process, rely on it and ignore the poor examples set by President Trump. By doing so, it would help restore the clemency review process to its former role as a normal, routine apparatus for granting presidential mercy to federal offenders.

The guiding principles should be those expressed by Alexander Hamilton in Federalist No. 74: to use clemency either to show mercy or to “restore the tranquillity of the commonwealth”. Respecting these rationales, future presidents should resist any temptation to ignore the usual screening process and abuse the clemency power to enrich their political allies, friends and family and, of course, themselves. The best way to do this, some scholars feel, would be to prosecute Trump once he exits as president of the United States of America.

—Jana Kalyan Das is a senior advocate of the Supreme Court, while Sandeep Devashish Das and Ninad Dogra are AoRs there