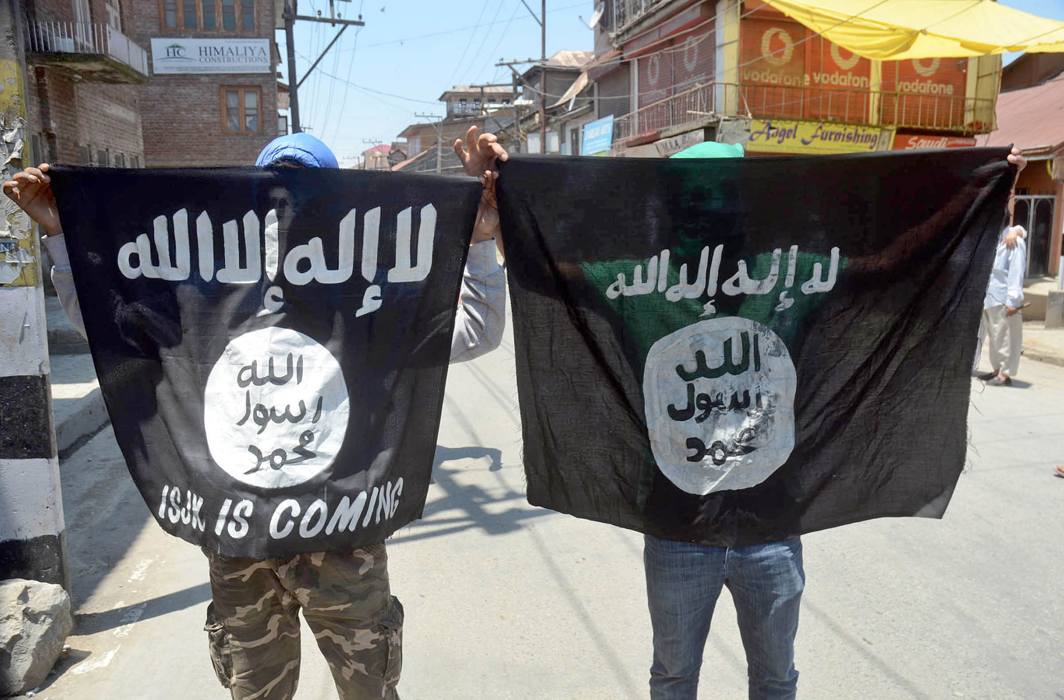 Above: Youths displaying IS flags during a shutdown observed in Srinagar/Photo: UNI

With the Jammu & Kashmir in a socio-political flux, it is an attractive rallying point for militants. This has led to increased radicalisation of youth

J&K has morphed into J&K 2.0 after Parliament passed a resolution abolishing Articles 370 and 35(a) of the Constitution in August. It not only deprived J&K of its special status, but downgraded it to a Union Territory. This was a watershed moment in India’s seven-decade-long quest to fully integrate J&K with the rest of India on equal terms.

Unfortunately, the abolition of Article 370 provides an attractive rallying point for militants, particularly when there is a socio-political flux. In other words, J&K 2.0 can bloom into a “Paradise on Earth” only if jihadi terrorism and separatism cease to be extra-constitutional agents interfering with the socio-political life of the average Kashmiri.

Islamist militancy and separatism are not new to J&K. However, when the J&K Liberation Front gave a call for azadi, Nizam-e-Mustafa (Rule of Muhammad) became the call of Hizbul Mujahideen and Jamaat-e-Islami militants supported by Pakistan’s ISI and gingered up by Afghan militants. This led to escalated violence in 1989-90 and resulted in the coercive eviction of Kashmiri Pandits from the Valley with the state government soft-pedalling the situation.

Since then, though separatism has taken a backseat, Islamic radicalism continues to condition the socio-political discourse in the state. This has been taken advantage of by PoK-based jihadi groups like the Lashkar-e-Taiba (LeT) and Jaish-e-Mohammed (JeM) to create a climate of fear as well as to attract young people to their fold.

Globally, there has been a qualitative change in Islamist terrorism after the advent of the Islamic State (IS), a clone of Al Qaeda. With its ruthless tactics and superior net-based propaganda technique, the IS dethroned Al Qaeda from the leadership of jihadi terrorism. Though it was defeated in Iraq and Syria over 2018-19, it still remains a potent force attracting educated Muslim youth from all over the world. Its successful lone wolf attacks and use of social media for propaganda and recruitment have set new standards in refining jihadi terrorist operations, particularly in J&K.

According to Shadi Hamid, Senior Fellow, Foreign Policy, Centre for Middle East Policy, the IS “draws on, and draws strength from, ideas that have broad resonance among Muslim-majority populations. They may not agree with its interpretation of the caliphate, but the notion of a caliphate—a historical, political entity governed by Islamic law and tradition—is a powerful one, even among more secular-minded Muslims”.

Pakistan had been using AQ affiliates like the LeT and JeM operating from sanctuaries on the Pakistan side of the LoC to carry out attacks in J&K. This is part of the Pakistan Army’s strategy to “bleed India” to compensate for limitations of its security forces. Pakistan PM Imran Khan had admitted recently that there were 40,000 jihadi terrorists in the country, while claiming that his country too is a victim of terrorism.

It is not surprising that in the charged environment, radicalisation of young people, including some well-educated and employed youth, has been taking place for quite some time now. Their numbers had gone up from 131 youths who joined terrorist outfits in 2017 to over 200 in 2018. Some new terrorist outfits such as ISIS–Kashmir and Ansar Ghazwat-ul-Hind, aligned respectively with the IS and Al Qaeda, have come up in the past few years.

So any master plan for J&K 2.0 must have de-radicalisation (DR) at its core. It should be holistic and not merely confined to militants in captivity. DR should not be confused with the Army’s Operation Sadbhavana carried out since 1998. Under this programme, the Army has tried to improve the quality of life of people in five focus areas: education, infrastructure development, health and sanitation, women and youth empowerment and community development.  During the last decade, the Army has spent over Rs 550 crore in J&K under the programme and runs 50 Army Goodwill Schools and health clinics and improved communication in remote areas.

But DR goes beyond this to remove the effects of radicalisation. Radicalisation is a product of protracted psychological conditioning of minds. It is carried out through madrassas, mosques, political propaganda, and print and social media. Such venues of radicalisation need to be sanitised vigorously. DR requires an enduring strategy that focuses not just on targeting the external and internal actors who fuel radicalisation, but also on the processes through which it is carried out.  The International Centre for the Study of Islamic Radicalisation and Political Violence of King’s College, London, studied DR programmes in eight Muslim majority states. It covered Algeria, Bangladesh, Egypt, Jordan, Malaysia, Morocco, Saudi Arabia and Yemen. Radicalisation of the population in these countries and the techniques adopted varied from soft to hybrid to hard approaches. Though the study was done in January 2012, just before the advent of the IS, the six “general lessons” it provides are useful while designing the DR effort in J&K.

Without an environment of governance, successful DR cannot be carried out. Such an environment requires the ability to sustain high growth rate, check corruption and inequity. Any deficiencies and grievances, particularly in socio-economic conditions, are usually exploited by extremists.

According to the study, religious dialogue and counselling alone will not curb violent extremism. Other non-ideological, social, economic and political factors also may contribute to radicalisation. In an increasingly globalised world, national DR programmes cannot be framed in isolation. This is very much relevant in J&K as Pakistan continues to be an external source of support for radicalisation. With the US-Taliban talks in the final stage, we can expect the US to withdraw its troops from Afghanistan, legitimising the role of the Taliban in the power-sharing arrangement. Its fallout on jihadi terrorism is not known; however, this will have to be factored in in India’s overall plans for J&K.

Successful DR has to be consistent with J&K’s culture and be sensitive to “what is acceptable and not acceptable in their societies” as the study says. In tandem with DR, a counter narrative has to be developed for countering radical and extremist propaganda, particularly through social media.