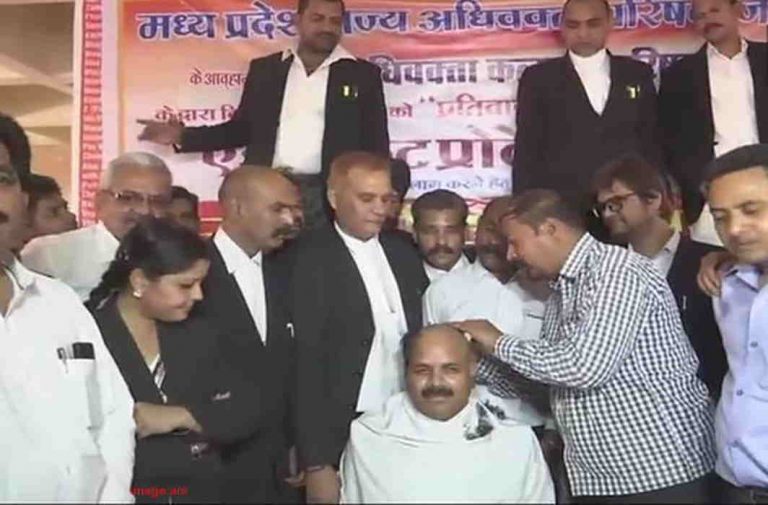 Above: Lawyers in Bhopal get themselves tonsured as they demand a law for their protection

Addressing students at the National Law Institute in Bhopal, Madhya Pradesh (MP), Chief Minister Shivraj Singh Chouhan recently said that the Advocate Protection Bill will be introduced in the assembly in the forthcoming monsoon session. He also told them about a hike—to Rs 5 lakh—in the maximum limit of funds for treatment of serious ailments afflicting advocates. He further said that in case of untimely death, Rs 4 lakh will be given to the kin of deceased advocates, which will include Rs 2 lakh from the state government and Rs 2 lakh from the bar council.

With these measures in place, MP will become the first state in India to enforce a special law for the protection of its lawyers who number around 90,000. Although bar councils and associations in several states, including Maharashtra, Andhra Pradesh and Uttar Pradesh, have over the years raised the demand for a specific act to protect lawyers from physical assault, no state government has acted upon the demand so far.

In MP, too, Chouhan had as far back as August 2012 assured the implementation of an Advocate Protection Act but kept procrastinating even as lawyers exerted pressure on him through various forms of agitation. Addressing a large gathering of lawyers at his official residence, the CM had said that in view of the unfortunate incidents of assault on lawyers, such an act was imperative. However, the issue is still hanging fire.

Coming as they do ahead of the assembly elections later this year, the CM’s announcements are being viewed as a pre-poll bonanza for the lawyer fraternity. Significantly, the main opposition party in the state, the Congress, has already stated that it will implement the act within a month if the party is elected to power in the state.

Advocates in the state have been resorting to agitation for getting a law for their protection in place since 2011. The last of the series of agitations was a week-long boycott of the courts from April 9 to 14 this year. During the boycott call, court premises across the state looked deserted.

According to sources in the High Court registrar’s office in Jabalpur, 960 hours of judicial work at the Court and 40,000 hours in the lower courts were lost due to the advocates’ strike.

Earlier, lawyers had struck work in December last year and staged demonstrations to press the demand for the act. In fact, lawyers have resorted to agitation so frequently that then Madhya Pradesh High Court Chief Justice Rajendra Menon had to take suo motu cognisance in November 2015. A bench headed by him had asked the state government about the fate of the chief minister’s August 2012 announcement about the act. Justice Menon expressed concern over the loss of time in court proceedings due to advocates’ strikes in support of the demand. The bench further advised the Madhya Pradesh High Court Bar Association and the Bar Council of Madhya Pradesh to coordinate with the state government on framing a draft proposal for the proposed act. However, the government chose to sit on the demand.

State Bar Council member and senior lawyer Shivendra Upadhyay blames the bureaucracy for obstructing implementation of the act. He says the Chouhan government has brought its officials under the purview of a protection act, but similar security cover to the advocates is being denied.

In recent months, demands for legal protection to lawyers have been raised in several states. In Maharashtra, a legal practitioner, Ajay Kumar Waghmare, of Nanded moved the Bombay High Court in March this year, praying for appointment of a judicial committee to look into cases of assault on advocates while stressing the need for a law to protect them and their dignity. He cited a media report about a 63-year-old senior lawyer in Maharashtra being assaulted by a former corporator whom he was questioning in a land dispute.

Likewise, in November last year, advocates in Andhra Pradesh sought a similar security act in the wake of assaults on several lawyers in Vijayawada and Rajahmundry.

Madhya Pradesh law department sources say a bill will be prepared in consultation with advocate bodies and other legal experts. It will incorporate amendments in certain sections of the Evidence Act, 1872; the Indian Penal Code, 1860; the Code of Criminal Procedure, 1973; and the Advocates Act, 1961, to ensure safeguards for advocates while working.

The bill will also factor in frequent complaints of advocates that many from their fraternity are framed in controversies by rivals of their clients in order to exert pressure on them.

Sources further said that the bill may also provide for safeguards for advocates in discharge of their duty in good faith during the course of judicial and quasi-judicial proceedings. Advocates have demanded that there should be specific provision that no court shall take cognisance of any offence alleged to have been committed by any advocate while acting or purporting to act in the discharge of his duty as prescribed by any statute, without the previous sanction of the State Bar Council defined under Section 2(1)(K) of the Advocates Act, 1961.

The lawyers also want to include in the bill a provision that the use of derogatory language in judicial and quasi-judicial proceedings against advocates appearing on behalf of either party shall be a cognisable, non-bailable offence.