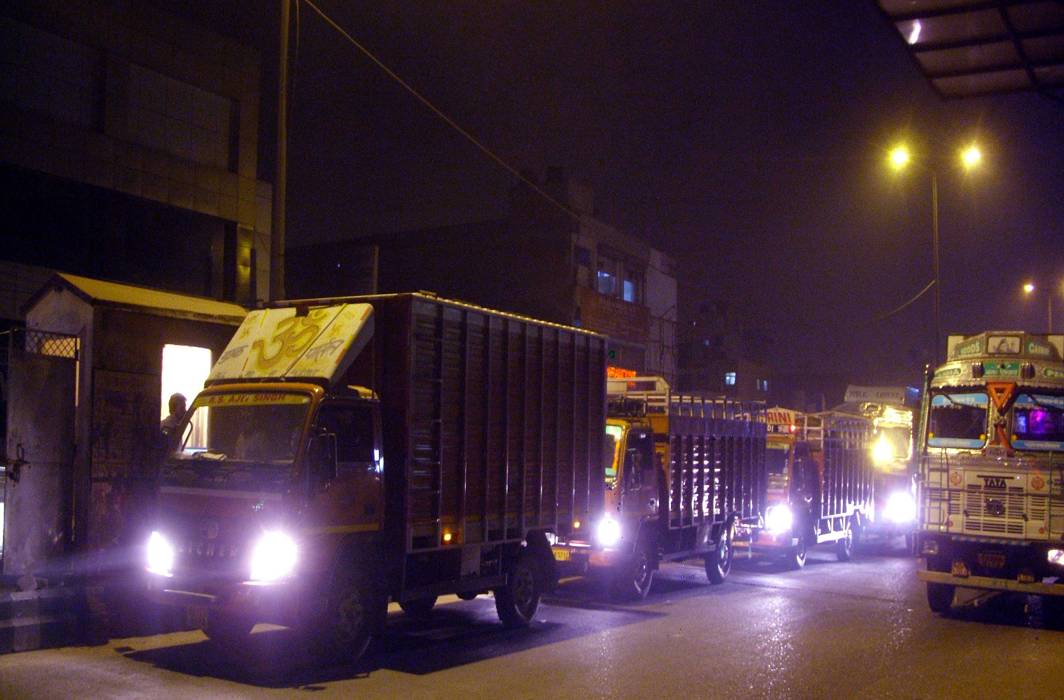 Above: Trucks loaded with goods waiting for clearance on a highway

This Bill, to be rolled out on April 1, aims at tracking goods and checking tax evasion. But will it make the life of transporters easy?

The latest change in the GST system is the E-Way Bill (EWB), an electronic document to be generated on GSTN (GST Network, which manages the IT system of the GST portal) whenever there is transportation of goods worth more than Rs 50,000. Even after the introduction of GST, some states such as UP and Karnataka had a Way Bill system where they had different models of state VAT Way Bills. This resulted in compliance difficulties for transporters and delay at inter-state check-posts. EWB is said to remove such bottlenecks by bringing in uniform provisions without needing routine checks at inter-state check posts. It is also said that the EWB mechanism will ensure that goods being transported comply with GST laws and thus, it will become an effective tool to track their movement and prevent tax evasion.

Initially, when GST was introduced in July 2017, not many people were inclined to introduce EWB. It was, therefore, decided to defer its introduction. However, the GST Council decided to introduce it from  February 1, 2018. But the IT system collapsed on the very first day, forcing the government to defer it again.

Meanwhile, the Group of Ministers (GOM) formed to resolve the IT issues of GSTN, led by Sushil Modi, Bihar’s deputy chief minister, has recommended April 1 for the roll-out of EWB across the country. In fact, the trigger for reconsideration of introducing EWB has been the low revenue collection from GST as against the expected amount.

But first, a few words about the EWB. The person doing the transportation may be the consignor himself, the consignee or the transporter. He has to upload information relating to the goods, their transportation and the transporter before the goods actually move. It will be in two parts. Part A will contain details of the goods and particulars of the recipient/consignee, including his GST Identification Number (GSTIN), while Part B will have all the vehicle details required.

Every EWB generated will have a unique number, which will be made available to the consignor (supplier), consignee (recipient) and the transporter. The rules relating to EWB provide for different ways that goods are transported, for example transportation in the consignor’s own conveyance, goods handed over to a transporter, use of a single vehicle for transportation of one consignment from one location to another, use of multiple vehicles for one consignment and use of a single vehicle for carrying multiple consignments. The validity of EWB depends on the distance travelled. For less than 100 km, the EWB will be valid for 24 hours. For every 100 km thereafter, the validity will be one additional day. Thus, EWB is a compliance requirement which will involve a lot of additional work for the consignor and the transporter.

As for enforcement, a GST officer from the centre and one from that particular state are empowered to intercept any vehicle to verify the EWB for all inter-state and intra-state movement of goods. He can also do a physical verification of vehicles and their goods. If a vehicle is detained for more than 30 minutes, the transporter will upload that information. But for a few exceptions, the generation of EWBs is mandatory. If EWBs are not issued in accordance with the provisions contained in GST Rules, the same will be considered a contravention of rules and will invite penal action. Further, the goods transported without the cover of EWB will be liable to be seized and confiscated.

So what are the pros and cons of the EWB system? First the pros. It will boost revenue collection by tracking the movement of goods and thus check tax evasion. Second, some states are continuing with Way Bills with different models. This causes hardship to the transporters. A uniform EWB system, with the help of technology, will alleviate transporters’ problems. Also, the proposed system will be user-friendly, and with the back-up of technology, EWB can be self-generated. Finally, there will be no check-post at inter-state borders for routine check of EWBs, and hence no long queues of trucks.

However, with the unpleasant experience of GSTN crashing during the introduction of GST in July 2017 and EWB on February 1, 2018, critics opine that GSTN should be given time to settle down so that its core functions such as registration, return filing, in-voice matching and refunds go smoothly.

Once the system starts running, around 50 lakh EWBs will be generated per day. In February, more than 9.5 lakh taxpayers and 8,500 transporters were registered on the EWB portal. Even as GSTN authorities have claimed that the load capacity will be checked for 75 lakh EWBs a day, critics have reservations after the February crash.

Also, it is felt that the Way Bill system which was prevalent in states during the pre-GST era could be justified on the ground that different states had different rates of state VAT, and some VAT-payers resorted to illegal tax-shopping in different states. That reason is non-existent in the GST era where the rates of CGST (central GST) and SGST (state GST) will remain the same across the country. Besides, for checking tax evasion, there is an elaborate scheme of invoice matching of credits; that should be put in place quickly.

The EWB is hardly an improvement over the state VAT Way Bill; it’s basically the electronic version of it. Further, notwithstanding the safeguards by way of policy directions on EWB against the misuse of power to intercept trucks on highways, the ground reality is that there is every likelihood of reckless interception and search of transport on remote highways. This will lead to disruption of flow of goods and breed corruption. This will definitely hit the logistics sector directly and others indirectly.

Also, the Directorate General of GST Intelligence, which is spread across the country, should be further strengthened so that it can develop intelligence on surreptitious supply of goods without payment of GST, and should be able to intercept transport carrying those goods on specific intelligence.

Seeing the government’s determination to bring in the EWB system, a suggestion has been made in some quarters that the threshold limit should be raised from Rs 50,000 to Rs 5 lakh. That will, no doubt, reduce the burden on the system and transporters. But many apprehensions remain. Perhaps EWB should be deferred for two more years to allow GSTN and GST to stabilise first.

—The writer is former chairman, Central Board of Excise and Customs, and author of  “Know Your GST–GST Unravelled”.