With the Centre cancelling the Amarnath Yatra and additional deployment of a huge number of paramilitary troops, and rumours of the abrogation of Articles 35A and 370 by the centre, the state is on heightened alert. Is a “constitutional coup” around the corner?

The perpetual trust deficit between the BJP and Kashmir Valley has widened. The ongoing political storm over the cancellation of the Amarnath Yatra and recent security related measures confirms this. Citizens there look askance at official claims that the additional deployment of over 38,000 paramilitary troops is a routine security drill not linked to the special status of J&K. In their perception, the BJP government at the centre, in keeping with its leaders’ public and electoral pronouncements, is gearing up to abrogate Article 370, guaranteeing J&K’s special status, and Article 35A, protecting their exclusive privileges as state subjects like employment and acquisition of immovable property. They believe this will be done around August 15.

The trigger has not been provided by heavy induction of forces alone. At least one editor, along with a senior colleague, has been summoned to Delhi and interrogated by the National Investigation Agency (NIA). Another editor has been arrested and singled out of six survivors in connection with summons issued more than a quarter of a century ago. Official orders have been issued, among other things, for an exclusive survey of mosques and their management committees. A Railway Protection Force (RPF) “order” has called for storing rations for at least four months and taking other measures in view of the “forecast of deteriorating situation and issue of law and order” for “a long period”.  Security bunkers have emerged in the old city and areas thronged by tourists, including the famous Boulevard Road along the picturesque Dal Lake.

As a result, there is confusion, panic and anger. People are on the edge, speculating about the BJP’s designs. By and large, the sentiment runs high that the erosion of their special status is around the corner and the troop deployment is to preempt the protests.

National Conference (NC) President Farooq Abdullah is reportedly surprised: “We were sitting peacefully and didn’t create an uproar but what was the need for deployment of thousands of troops in view of the peaceful (Amarnath) yatra and influx of tourists, and then there was an order by the Railways. There is panic as over 10,000 soldiers have been called which is not a joke. On the one hand the government claims the situation is normal, the yatra is going on smoothly and tourists are coming, while on the other hand, they are deploying more forces and have kept masjids under scrutiny.” According to him, annulling Articles 370 and 35A would be “tantamount to a constitutional coup”. “Articles 35A and 370 should not be removed. They form our foundation. We are Hindustani but they (Articles 35A and 370) are important for us,” he said. He has argued that if Article 35A is revoked on the pretext of being a presidential order, then all presidential orders too will go, a view echoed by J&K Pradesh Congress Committee (PCC) vice­president and former legislator GN Monga.

Even Sajjad Lone, the People’s Conference leader who is considered close to the BJP, is alarmed: “If the government indeed has any such intentions, it would be tantamount to stretching adventurism to unacceptable limits. Any adventurism will erode the credibility of those who believe in the concept of India.” He has described the special provisions as “irreversible” and “sacred”.

Mehbooba Mufti, People’s Democratic Party (PDP) president and a former chief minister, has summed up the existing scenario: “Today everything is in danger. Nobody knows what is going to happen….” On July 28, she told her party workers on the 20th Raising Day of the PDP: “Our priority is to defend our identity, especially the legitimacy of Articles 35A and Article 370 of the Constitution. So we are ready for a big fight.” She warned: “We want to tell the central government that tinkering with Article 35A will be akin to setting a powder keg on fire. If any hand tries to touch Article 35A, not only that hand, but that whole body will burn to ashes.” 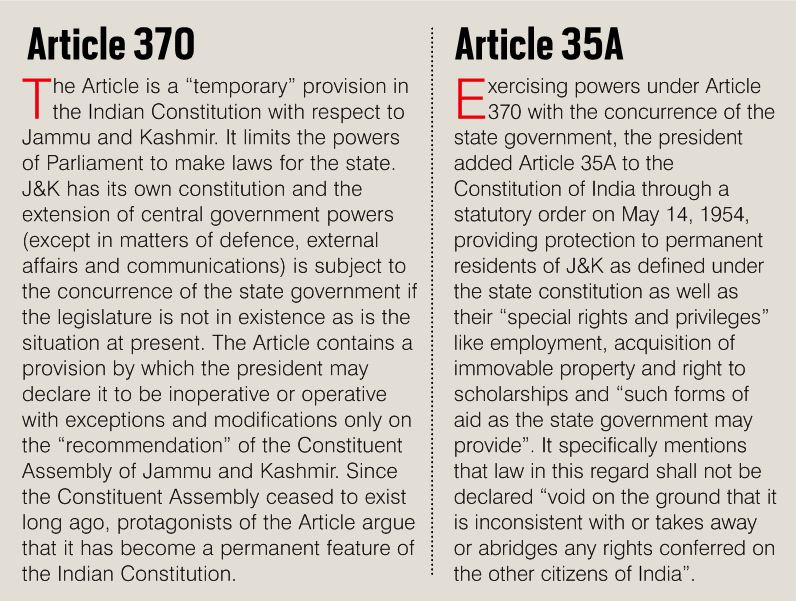 Dispassionate observers are keeping their fingers crossed. Tahir Mohiuddin, leading Kashmir commentator and editor of Srinagar’s Urdu daily Chattan, told India Legal on the phone:“Prima facie, it appears that rumours are having a field day. Additional deployment of security forces may be because of the reasons mentioned by officials. There is always tight security around August 15. Possibly the BJP is planning bigger celebrations this time as the party is in power at the centre and runs the state under President’s Rule. But if rumours have gained currency, it is because of the BJP leaders’ repeated utterances about abrogating Articles 35A and 370 of the Indian Constitution. The brazen manner in which they talk about an important issue instills suspicion in the minds of the people that they can act equally blatantly to achieve their objective.”

Apprehension, thus, is rooted in the basic philosophy of the BJP which runs contrary to local aspirations. Abrogation of Article 370 has been a consistent demand of the party even in its earlier avatars as the Jana Sangh and Praja Parishad. Article 35A has been clubbed with it in recent years. BJP’s national Vice-president and former Madhya Pradesh Chief Minister Shivraj Singh Chouhan, who happened to be in Srinagar recently, appears to have sensed the local mood. He sought to clarify before leaving Srinagar: “There is no truth in rumours that Article 35A would be rolled back.”

At times the party says that the matter of abrogation of Articles 370 and 35A is sub-judice as it is pending in the Supreme Court. Yet, its leaders’ unbridled enthusiasm for their repeal often gets the better of them. BJP General Secretary Ram Madhav has often said that Article 370 would go “lock, stock and barrel”. Jitendra Singh, minister of state in the Prime Minister’s Office who belongs to Jammu, has widened the scope of the debate and stirred tensions within the state by blaming the NC and the PDP for “creating noise” as they feel they are losing the people’s mandate. According to him: “Kashmir-centric parties which pursued family rule, securing just 8 to 10 percent votes, have fears that if the situation improves their 30 to 40 years old monopoly will end.” Unmistakably, his reference is to NC’s victories marked by poor voter turnout in three parliamentary seats in the Valley.

Omar Abdullah, NC vice-president and former chief minister, lost no time in hitting back. Addressing party workers in Srinagar’s Eidgah constituency, he said: “If they say that only 10 percent voted in the parliament elections, then they should ascertain as to why 90 percent refrained from voting. The need of the hour requires New Delhi to hold parleys with those who didn’t come out to vote. The powers sitting in New Delhi are reluctant to talk to those who have different views. New Delhi is interested only in those whose sole agenda is to add colour to the nefarious designs of forces that want to obliterate the identity of the state.”

He drives home the point that the central government’s stubborn resistance to holding talks with militants and separatist political organisations fuelled further alienation of the masses from the national mainstream. He agrees that “the matter (pertaining to both the Articles) is sub-judice and therefore should be kept aloof from politicking and the centre should repose faith in the Supreme Court”. However, in the high-voltage political environment, he too is unable to resist the temptation of scoring a point. He goes on to advise the central government to “refrain from bullying the people of the state with unwarranted and intimidatory threats on annihilating Articles 35A and 370”. Actually, this may be a rare sub-judice subject which is openly debated outside court precincts.

An NC delegation called on Prime Minister Narendra Modi on August 1 and was reported to have asked him “to let sub-judice matters be settled by the courts”. There was no immediate inkling that the cordiality that was said to have marked the meeting had percolated to the ground.

So deep-rooted is the suspicion about the BJP’s motives that the state government’s somewhat belated offensive to contain rumour-mongering has not achieved the desired breakthrough. Governor Satya Pal Malik jumped on the bandwagon on July 30, asking people not to pay heed to “rumours” of any major decision on the special status. He has been saying that everything is normal.

He said the orders which had appeared on social media in recent days were not valid, prompting Omar Abdullah to seek a CBI inquiry. Malik had a dig at rumour-mongers saying: “If someone catches a sneeze in Lal Chowk, by the time it reaches Governor House, it is projected as a bomb blast.”

Before him, his adviser on security affairs, K Vijay Kumar, explained that the deployment was necessitated in response to the “needs felt by the security grid” and was a “deliberate and calculated response”. He stated: “There was an addition or reduction in the security grid owing to our focus on Amarnath yatra. Therefore, the need arose for some more forces. It is a part of the plan which is in the pipeline.” He decried “rumour-mongering”. Additional Director General of Police (ADGP), Law and Order, Muneer Khan was the first to mention that 100 companies of paramilitary forces (consisting of 1,000 persons each) would replace those personnel of training companies which were deployed on various duties since last year, starting from urban local body elections.

The RPF officer who issued the order for stocking essential commodities has been transferred. The Railways has not denied the letter, but said that he was not authorised to issue it.

The rumours may be buried at some stage. However, there is no smoke without fire. Nothing has happened to suggest that the BJP has given up its resolve to do away with the two statutes. Its devil-may-care approach about popular feelings in the Valley is certain to keep temperatures on the boil. The seeds may have already been sown for a bitter campaign, sharpening regional and religious divides in the assembly election likely to be held this year. By targeting “Kashmir-centric parties”, the BJP has set the agenda for strengthening its base in the Hindu-majority Jammu region where it is enjoying its finest hour.

But how can it achieve its objective of forming a government on its own in the state by shutting its eyes to the sentiments of the Muslim-dominated Valley in the country’s only Muslim-majority state? It has never won an assembly seat in this region and its victories in the last civic polls were the outcome of a poll boycott by the NC and the PDP and voting in its favour by migrants living outside the Valley.