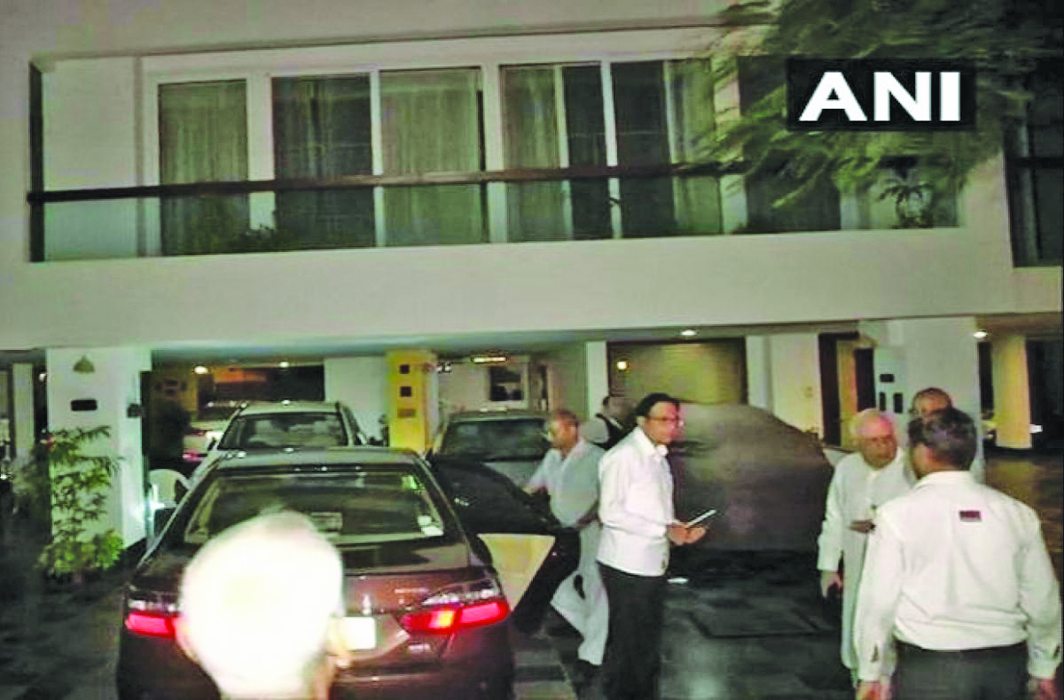 With investigating agencies filing money laundering charges against the former home minister, his argument of vendetta politics may not hold up in the Supreme Court

As former home minister and one of the country’s leading legal luminaries, Palaniappan Chidambaram could never have imagined the scenario he now finds himself in. The Supreme Court passed the buck around from the bench to the registry on his anticipatory bail petition, a CBI team climbed the wall of his residence in Jor Bagh in a live display of false bravado to arrest him and TV channels continued to paint him as a fugitive even as he tried to explain that his name is not even in the FIR in a case where he has been called the “kingpin”.

And to make matters worse, on August 26, the Supreme Court dismissed Chidambaram’s petition, filed against the rejection of anticipatory bail by the Delhi High Court. The same day, a CBI special court extended his custody by the agency by another four days. His bail plea will now come up on August 30.

Solicitor General Tushar Mehta had earlier stated: “We have electronic evidence, email exchanges to trace route of illicit, illegal transfer of money.” He opposed Chidambaram’s bail application in both the ED case related to the same INX case as well as CBI custody. Mehta said before the Court that shell companies were created by those with close links to Chidambaram and the money was laundered through these companies. Defence lawyer Kapil Sibal told the Court that the Delhi High Court order cancelling Chidambaram’s protection against arrest in the CBI case was copy-pasted from ED notes. “If a court starts cut, copy and paste of a note damning me, what chances can I have to get relief? And this too, after reserving judgment for seven months.”

When the matter was heard on August 26, the Supreme Court flatly refused the Special Leave Petition in the CBI custodial case calling the petition infructuous as he had already been arrested. It declined the plea of Kapil Sibal, part of Chidambaram’s legal team, that the CBI had arrested him even during the pendency of the matter with the SC.

The drama surrounding his arrest was ironic as well as surreal. Ironic because, as home minister in 2010, he had ordered the arrest of present Home Minister Amit Shah in a case involving the fake encounter of Tulsiram Prajapati, a criminal. And surreal because of the circumstances of his arrest, his pre-arrest press conference and the intrigue over his disappearance for 27 hours. He is now in CBI custody for four days and an occupant of Cell No 3 at the CBI HQ, a building he himself had inaugurated in 2011 as home minister. 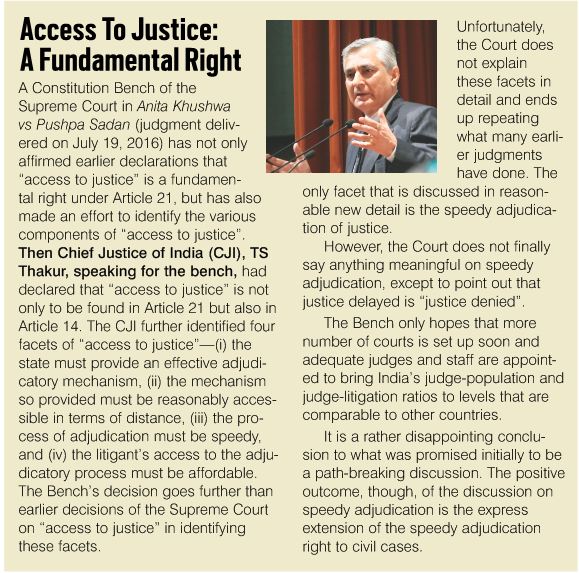 Legally speaking, the CBI may still be some way from proving anything as the basis of Chidambaram’s arrest rests in the testimony of Indrani Mukerjea who is herself in incarceration for the murder of her daughter, Sheena Bora. Indrani had in February 2018 stated under Section 164, CrPC, before a special magistrate that she had given a million dollars to Chidambaram’s son, Karti, for fixing the money trail from her company, INX Media, to Channel 9X without approval of the Foreign Investment Promotion Board (FIPB). This, according to her, happened in 2007-08 when she was CEO of INX Media along with her husband, Peter Mukerjea.

In July 2019, the special CBI judge advised her to become an approver in the scam worth about Rs 307 crore (the Mukerjeas raised Rs 305.5 crore from investors abroad and are believed to have invested Rs 307 crore in INX). She agreed to this and subsequently, her statement was made evidence. So her status changed from “accused” to “approver” and her statement changed from “confession” to “evidence”. “Subsequently, she has not given any corroborative statement to anyone and for close to 14 months, the CBI has not filed any charge sheet based on her evidence,” said Abhishek Singhvi, part of the legal team of Chidambaram, to India Legal. He asserted that Chidambaram had been called to cooperate with the investigations only once in June 2018 and had not been called since. 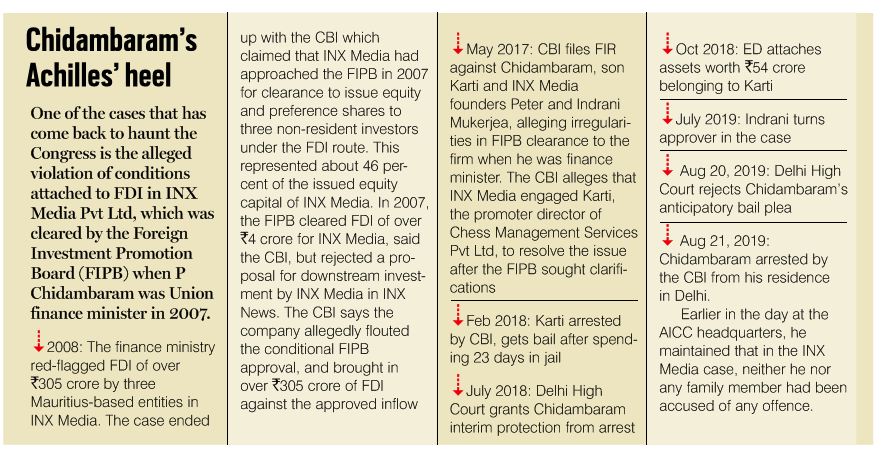 Singhvi said: “It is almost routine for judges to grant custody of an accused as they do not want to interfere with police investigations. The only battle is to get the number of days of custody reduced.”  The SC is unlikely at this stage to interfere with the special judge’s order, tho­ugh it may be an opportunity for some more legal theatrics for both sides.

What, then, is the CBI case? The CBI has interrogated Karti several times. There has been a continuing battle in and outside courtrooms in which protection against the arrest of Chidambaram lasted more than 14 months. The CBI will now have to produce something substantial in its charge sheet if it wants to implicate Chidambaram. What it has is a confession/evidence from Indrani and statements of at least six secretaries of the central government who were members of the FIPB in 2007-08. This includes D Subbarao who went on to become RBI governor and Sindhushree Khullar who became the first CEO of NITI Aayog under the Modi government in 2015.

The CBI says that Chidambaram’s statements do not match those of the secretaries. It appears that all six have laid the blame at his door as he was the boss under whose insistence they provided backdated approval. RBI governor Subba Rao has said that they were not given any contextual papers of the INX case and were simply presented with the application for approval, so any approval granted by the board was only on the basis of papers placed before it. In 2007, the IT department had approached the finance ministry and FIPB to find out how INX Media had diverted Rs 307 crore from an off-shore account to a TV channel venture against the rules and without the permission of the FIPB. It appears the Mukerjeas approached Karti who advised them to deposit $1 million in an off-shore account of Chess Management Services as his “consultancy” fee and re-apply for permission.

The biggest question thus is, what was Chidambaram’s role as FM in getting clearances from the FIPB the second time around? While the FIPB had approved Rs 4.62 crore worth of foreign investment into INX Media, it did not approve its proposal to downstream 26 percent investment in INX News. However, INX Media not only received Rs 305.36 crore in violation of FIPB rules, it also invested in 26 percent equity in INX News without FIPB approval.

From Indrani’s account, it appears she expressed her inability to pay into foreign accounts, which is when Karti suggested payment be made to Advance Strategic Consulting (ASC) where he had indirect control as opposed to Chess Management Services (CMS) where he was a director and which was engaged as a consultancy firm. ASC was paid Rs 10 lakh and Rs 3.5 crore in two separate transactions. The agencies have to unearth the link between Karti, ASC and CMS. CMS is allegedly owned by his chartered accountant.

As per the CBI FIR filed against the company, its directors and other involved parties in May 2017, “INX Media deliberately and in violation of the conditions and approval” went ahead with the downstream investment and generated FDI exceeding Rs 305 crore in the company by issuing shares to foreign investors at a premium of more than Rs 800 per share between August 2007 and May 2008. The foreign firms allegedly bought each share for Rs 862.31, a price that was more than 86 times its face value. The ED subsequently lodged a money laundering case against INX Media and related parties in 2018. The CBI wants to prove that as FM in 2007, Chidambaram, instead of ordering investigation into the irregularities, suggested INX Media apply for fresh approval for downstream investment of overseas funds it had already received.

The main defence available to Chidambaram is that everyone, including his son, who was named in the scam received bail, so he too is entitled to it now. There is also a Prevention of Money Laundering Act requirement that extremely small amounts (below Rs 30 lakh) need not fall under the foreign exchange laundering offence. The third is that the amounts were received by companies that had neither Chidambaram nor Karti as shareholders/directors and no public funds were involved.

Chidambaram’s legal team is expected to highlight that the transactions under question are bona fide and in the normal course of business, would have no relation to FIPB or any government processes. The legal team is likely to claim that the transactions are duly accounted, audited and disclosed in the books of all accounts and all statutory returns are registered and repeatedly scrutinised by the IT department and other investigative agencies.

The political fallout of the present scenario is that the Congress has come together in Chidambaram’s defence, right from Sonia Gandhi and Priyanka Vadra, to a battery of top lawyers. The BJP would ideally like Chidambaram to join its ranks to strengthen its team in Tamil Nadu where he and his family have tremendous clout. After the present round of arrests that seem like vendetta politics, that seems difficult now. But in politics, one can never say.