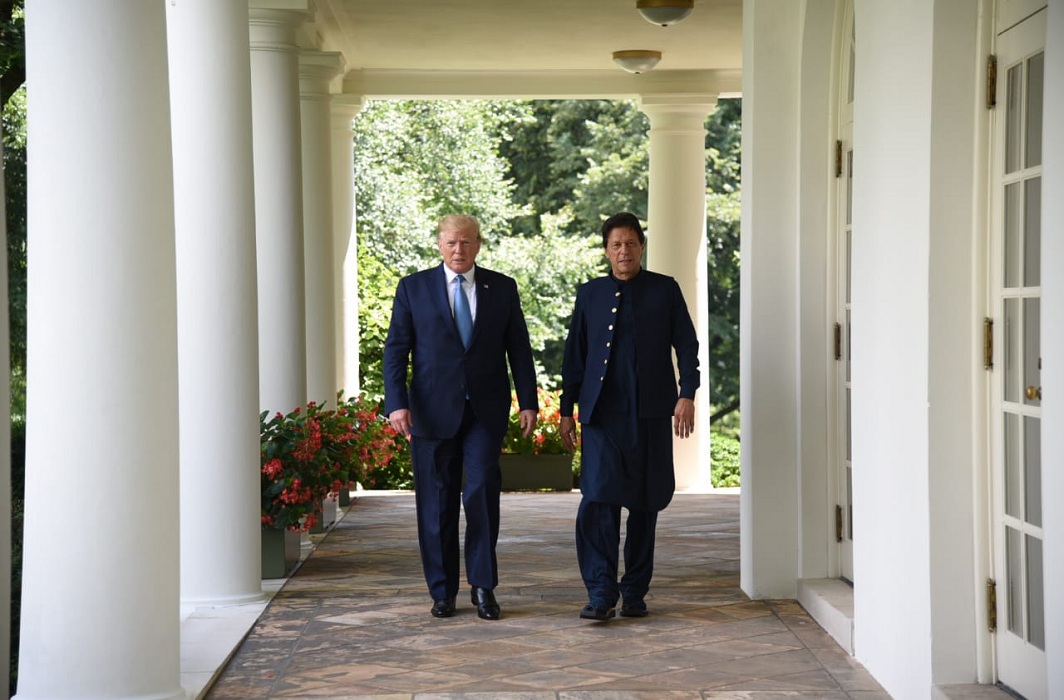 The US President’s offer to mediate or arbitrate in the Kashmir issue has sent alarm bells ringing among the former Pakistan diplomats, who feel this is not just off-the-cuff Trump style statement

The Pakistan media and the Imran Khan government leaders are hailing President Donald Trump‘s offer to mediate or arbitrate in resolving the vexed Kashmir dispute between India and Pakistan as a victory of their narrative.

In the initial euphoria of scoring a sort of diplomatic victory over India, Pakistanis have completely failed to read the sub-text of the statement. But the offer to mediate or arbitrate has sent alarm bells ringing among the former Pakistan diplomats, who feel this is not just off-the-cuff Trump style statement.

They feel the statement is loaded heavily in favour of India for many reasons and surprisingly they want Pakistan should not to succumb to the US meditation offer.

Former senior diplomat and former Pakistani’s high commissioner to India, Ashraf Jehangir Qazi, says during press conference at the Oval Office President Trump have said many things on Kashmir, which may have gladdened the hearts of Pakistanis but the offer to “mediate or arbitrate” is the most dangerous thing for Pakistan.

Qazi told a Pakistani TV channel: “Although India has rejected Trump’s claim, the use of words “mediate or arbitrate” can be very dangerous for Pakistan because “if” the US mediates or arbitrates on the issue of Kashmir, it will be in favour of the status quo, which is the problem to solution not solution to problem.”

Qazi says either Trump is plainly lying that Indian Prime Minister Narendra Modi requested him to mediate on the Kashmir issue or it is part of a great game by India that it will keep protesting against the US offer to mediate or arbitrate but wants the US to become a party to it because the US will work in favour of India as now India is its biggest strategic partner in Asia to counter China. Qazi added that “unfortunately our strategic ally China also wants status quo because if the Kashmir issue is resolved through mediation or arbitration then it will have very serious consequences for China in some of its regions and China would not welcome such outcome.” Although Qazi did not mention China’s restive region of Xinjiang where Uighur Muslims are fighting for independence, he was clearly referring to it.

Another former diplomat Ghalib Iqbal concurred with Qazi’s assessment. He said the biggest problem the US today is facing is the resolution of the Afghan problem according to the wishes of the US or which suits them. In this regard, he said President Trump must have been thoroughly briefed by the State Department, Pentagon and CBI that Pakistan can play an important role in bringing Taliban to the negotiating table. That is why he was full of praise for Pakistan. “However, the most dangerous thing is the offer to arbitrate on the Kashmir issue because if it (arbitration) begins simultaneously or after two or three months and Pakistan fails to deliver according to the wishes of the US in Afghanistan, then it will start arm-twisting Pakistan on the Kashmir issue, which will weaken the Pakistan position.”

Qazi says the Americans have put so much burden on Pakistan’s shoulders that it will be difficult for them to deliver.

“The US wants Pakistan to bring Taliban to the negotiating table and accept American conditions, which will divide them, weaken them and jeopardise their gains on the battlefield. Pakistan has limited influence on Taliban. On their part, Taliban may depend on Pakistan but their trust on Pakistan is comparatively is less,” said Qazi, adding that the responsibility given to Pakistan vis-à-vis Afghanistan is done keeping in mind 2020 presidential election in the US. “How much Pakistan can deliver in such a short time? he asked.

Mohammed Rizwan, a Fellow at Pragmora Institute, Canada, says even if PM Imran and army chief Qamar Javed Bajwa are on the same page vis-à-vis resetting relations with the US, there are other forces within the military establishment, which may not like Pakistan tilting so much on the US’s side as now China has become more than just a strategic ally.

“With the coming of China-Pakistan Economic Corridor (CPEC) and Pakistan agreeing to hand over the Gwadar port in Balochistan to China, Pakistan has become a territorial ally of China. Earlier, the conflict or friction between Washington and Beijing was not very clear. Five years ago, the situation was very different. Pakistan was an ally of both the US and China. Now, Pakistan can’t do this and has to side with one partner because in the present day situation lines of friction between the US and China are very clear and present on ground. They both are directly competing with each other on three fronts — technology, economic and military,” Rizwan said.

The other factor which worries Pakistani policymakers is the US-Iran conflict. It is reported that Trump-Imran meeting had been arranged through good offices of Saudi Crown Prince Mohammed bin Salman. They fear that in case of any military confrontation between the US and Iran, both the US and Saudi Arabia would want Pakistan to side with them. Iran is Pakistan’s neighbour and given the Shia-Sunni problem, any conflict in its neighbourhood would create serious problems both — domestically and internationally.

Qazi said: “The way the tension is escalating between the US and Iran with increasing incidents, there is likelihood of a significant US military attack. If this happens, it will completely destroy the security environment of Pakistan. The Afghan peace process will be reduced to smithereens. We must remember that Iran is neither Iraq nor Afghanistan. It’s much bigger than the two put together.”

Qazi said Iran’s Foreign Minister Javad Zarif has already warned the US that “you can start the war but cannot end it.”

Rizwan is also of the opinion that in case of a military conflict between the US and Iran, the damage Pakistan will suffer will be even bigger than Iran.

“Any attack on Iran will have long term consequences for Pakistan because what I foresee is that a large section of Pakistan’s governing elements would side with the US but a very large section of the military establishment would oppose and not allow this to happen as they have alignment with China and Russia,” Rizwan said.

By dangling the Kashmir bait, President Trump has done which millions of dollar American aid couldn’t do. Imran, accompanied by the Pakistani military’s top brass, has assured the US that he will try his best to bring Taliban to the negotiating table and help the US get out of the Afghan quagmire.

While Imran supporters are hailing the visit for opening new vistas in the US-Pakistan relations, former diplomats see it as a trap.

Trap or a new beginning in the US-Pak relations, only time will tell. But the task President Trump has assigned to Pakistan is very difficult. Even Imran has admitted this. Unlike, usual refrain of the US that “Pakistan should to do more” to help America extricate out of Afghanistan, this time Pakistan itself has taken the task for which it will have to “do more”.