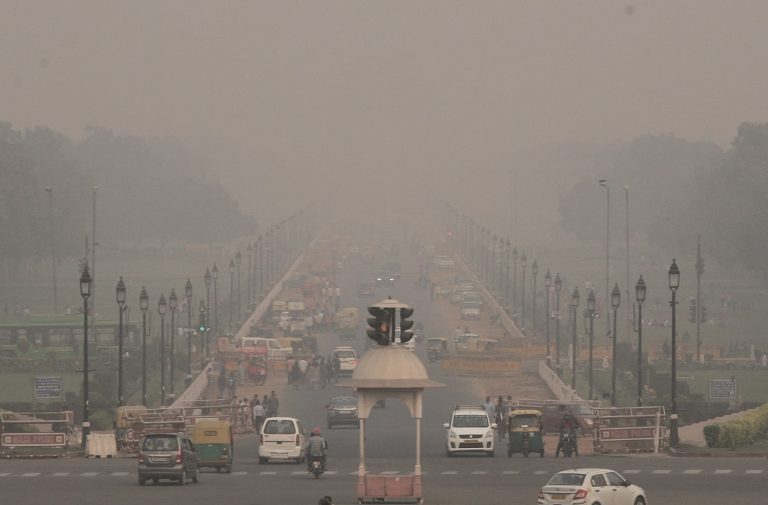 Above: Smoggy skies over Delhi

In January 16, 2019, at 13:25 hours, the Punjabi Bagh, New Delhi, air quality monitoring station showed a PM 10 level of 439 PPM against the prescribed standard of 100 PPM and PM 2.5 level of 202 PPM against the stand­ard of 60 PPM. This is more than four times the national standards as per the National Ambient Air Quality Standards.

According to the World Health Organisation (WHO), approximately 75 percent of deaths in India in 2015 were linked to air pollution, including deaths in rural areas. Reliance on biogas for cooking and warming, burning crop stubble, traffic exhaust, burning of waste and residue, industry emissions and construction dust are some of the largest contributors to air pollution in the country. A nationwide survey published in The Lancet Planetary Health on December 6, 2018, showed that 51.4 percent of air pollution related deaths were of people below 70 years of age.

The report goes on to say that one-fourth of the Indian population is exposed to air pollution, four times worse as per the ambient air quality standards prescribed by WHO. This contributes to reduction of life expectancy by 5.3 years, according to a report by The Washington Post, and even by upto 12 years in two districts in Uttar Pradesh, Hapur and Bulandshahr, just east of Delhi.

Given the situation, on January 10, 2019, the Union Ministry of Environment, Forest and Climate Change released the much-awaited National Clean Air Programme (NCAP).

The programme brings under its ambit 102 “non-attainment” cities across all states and Union Territories and aims to reduce the level of pollutants in the air in a timely manner. These are the cities which have failed to meet the National Ambient Air Quality Standards, 2009, defined under the Air (Prevention and Control of Pollution) Act, 1981.

Air pollution has been a raging issue and has seen a steep increase in the country over the past few decades. It is also a fact that air pollution is not limited to cities, as rural India continues to depend on biogas for cooking. Burning of crop remnants and waste continues across the country which deteriorates air quality. In spite of measures, policies, laws and action taken by government and local bodies, only marginal improvements have been noted. The Eleventh (2007-12) and Twelfth (2012-17) Five Year Plans had considered the strategy for National Clear Air Action Plan and City Action Plans for all major cities to meet the defined National Ambient Air Quality Standards. This was in sync with the 2004 Supreme Court order asking the 10 most polluted cities to draw up action plans. The list of cities was later increased to 54 by the Central Pollution Control Board (CPCB).

According to the directions of the October 2018 order of the National Green Tribunal, the states were to prepare action plans for non-compliant cities. Currently, there are 102 cities which have not been able to meet the defined ambient air quality standards. The NCAP calls for city-specific action plans for these cities which should be scientific and involve “source apportionment studies”.

A five-year analysis of data generated under the Air Quality Monitoring Programme, 2011-15, identified 92 cities which fell short of meeting the defined ambient air quality standards while eight more cities identified by WHO are the main target of the NCAP. Maharashtra tops the number of non-attainment cities with 17 cities, followed by Uttar Pradesh with 15, Punjab with nine, Himachal Pradesh with seven, Odisha and MP with six each, Assam, Andhra Pradesh and Rajasthan with five each, Karnataka with four, Chhattisgarh and Telangana with three each, Gujarat, Jammu and Kashmir, Bihar, Nagaland and Uttarakhand with two each and Jharkhand, Delhi, Chandigarh, Meghalaya, Tamil Nadu and West Bengal with one city each covered by the NCAP.

Given the fact that air pollution is now a critical issue, NCAP is a nationwide attempt to reduce air pollution by 20-30 percent by 2024, taking 2017 air pollution levels as the baseline. The objective of the plan is “comprehensive mitigation actions for prevention, control and abatement of air pollution besides augmenting the air quality monitoring network across the country and strengthening the awareness and capacity building activities,” said Dr Harsh Vardhan, Minister of Environment, Forest and Climate Change, while releasing the NCAP in New Delhi.

The first-of-its-kind programme is collaborative, multi-scale and includes cross-sectoral coordination between ministries, departments and local bodies. A budget of Rs 300 crore has been allocated to it for the first two years.

Drawing from international experience where Beijing and Seoul managed to cut PM 2.5 levels by approximately 45 percent in five years, the NCAP aims to reach the same reduction levels by 2024. However, reduction of PM levels by 45 percent would still leave Indian cities and regions heavily polluted and would not meet the defined ambient air quality standards. The health implications are likely to remain and would only see a marginal reduction at best.

The NCAP will require coordination between various central ministries, state departments and local bodies. The programme does not outline the details of how the coordination will take place. It, however, does mention that the CPCB will execute it in accordance with Section 162 (b) of the Air (Prevention and Control of Pollution) Act, 1981.

The NCAP focuses on increasing the network of monitoring stations, collecting data, assessing and certifying monitoring systems. Though this would benefit creating a more robust data base, existing data highlights the extent of the issue.

The health cost to the population and its impact on the country’s GDP has been assessed to be disastrous.

A World Bank report pegged that India lost 8.5 percent of its GDP in 2013 resulting from labour loss and increased cost of welfare due to air pollution. Given the immediate need for robust action, the programme falls short of taking concrete action and instead highlights the priority of collecting additional data.

The plantation drive that it quotes as one of the mitigation action points, takes its cue from the United States of America. It quotes that trees and forests in the US were able to remove 17.4 million tonnes of air pollution; the average air quality improvement was however less than 1 percent.

The action point does not make any reference to the existing policies on forests and tree plantation.

Recognising that dust is a major contributor to poor air quality, one of the action points as per the NCAP is to formulate a policy for dust management. The action plan does not mandate any department to take up the action point to be able to deliver on it, hence nullifying any urgency related to the matter.

The NCAP lists the action taken so far to combat air pollution, including the emission standards for the power sector and initiatives undertaken to curb agricultural stubble burning. However, until now, none of these actions has been able to combat the gravity or the scale of the issue and pollutants in the air remain above the dangerous mark. Though the NCAP requisites more city-wide studies, it is not clear why the past initiatives failed. The programme does not list the lessons learnt from the past failed initiatives.

The Rs 300 crore earmarked for the programme does not have a clear fiscal strategy. The city action plans will be borne by the states. Without a clear plan, it is not sure how this amount is going to be spent. The programme does not take into account “polluter pay” taxation to generate funds or any kind of financing mechanism to ensure sustained financial support required to ensure the objective of the programme is met.

The NCAP, though a positive step, remains advisory in nature. The programme is envisaged as collaborative and participative and is not being notified under the Environment Protection Act or any other Act.

“If NCAP is advisory in nature, what will make the states take this up seriously?” asks Anumita Roychowdhury, executive director, research and advocacy, Centre for Science and Environment. “Experience shows that without a legal mandate, the Centre as well as the judiciary have to repeatedly rap the state departments to get their act together.”

Objectives such as meeting ambient air quality standards will be hard to achieve if not notified under any Act. This, coupled with lack of a clear fiscal strategy and a meagre Rs 300 crore allocation, shows that a sustained effort towards controlling air pollution remains a distant dream.