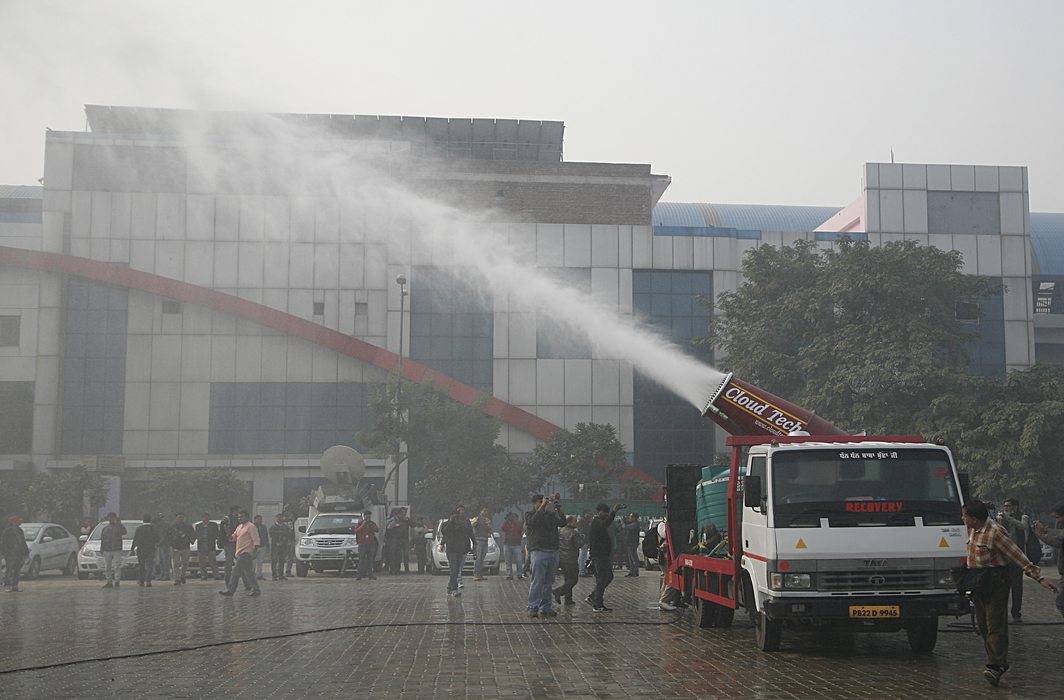 In an effort to reduce pollution and follow apex court orders, authorities are experimenting with anti-smog guns and towers. But the efficacy of these technologies is unproven

The smoky skyline over Delhi is there for all to see and indicative of the toxic air we breathe. Last month, PM 2.5 levels in the Delhi-NCR air had breached the upper limit in most measuring devices. This led to a huge public outcry. The Supreme Court stepped in to pull up state authorities and urged them to step up their game. In fact, a recent survey showed six cities to be more polluted than Delhi.

Authorities are working to curb this deadly menace. Several measures have been notified by the centre, according to the Supreme Court order, which is to be implemented by Delhi, Punjab, Haryana, Uttar Pradesh and Rajasthan. The Graded Response Action Plan (GRAP) notified in 2017 is designed to respond to emergencies. Even with multiple stakeholders stepping in to handle air pollution, the monster is thriving.

The government of Delhi-NCR is experimenting with technology in this regard. In November, the North Delhi Municipal Corporation tested an anti-smog gun which settled dust particles. The gun uses water sprayed at high pressure upto a height of 50 m, for which a water tanker needs to be attached. For two hours, an estimated 1,000 litres is consumed and a visible impact on dust is noticed, according to the North Corporation Standing Committee chairperson, Jai Prakash. Each smog gun can be procured at a cost of Rs 22 lakh and North and South Delhi Corporations have been testing them at pollution hotspots. Another technology which has caught the attention of authorities is smog towers.

On November 25, a Supreme Court bench of Justices Arun Mishra and Deepak Gupta urged the state authorities to submit reports on available technologies. It ordered that a concrete decision on smog towers be collectively taken by the governments of Delhi, Punjab, Haryana and Uttar Pradesh within 10 days of the date of the order after testing their efficacy. It wanted a report on a recent experiment with smog guns and other available technology such as wireless sensors, nanotechnology, laser methods, spectroscopic monitoring techniques and chemical methods. 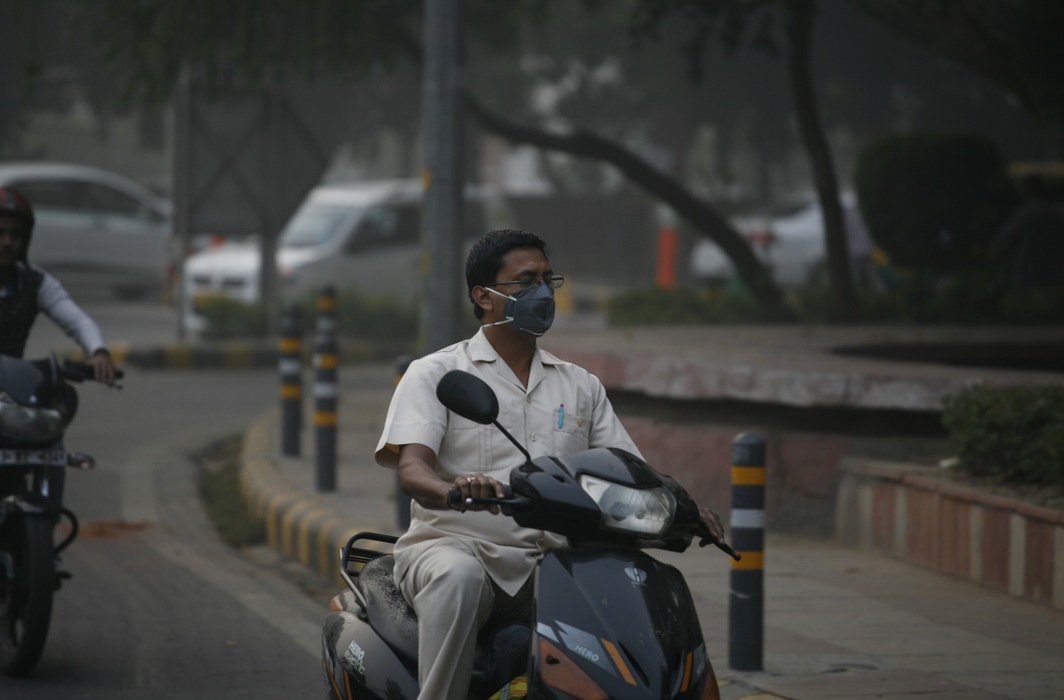 What is a smog tower? It is a large air purifier which claims to clean the air which passes through it. China installed a skyscraper-sized anti-smog tower in the city of Xi’an in 2018. The tower actively moves air through its filters—claiming to produce 10 million cubic metres of clean air per day. Given the size of the city, that is roughly 0.01 percent of the atmospheric air. Without concrete data, the efficacy of this technology is not entirely proven.

IITs in Delhi and Mumbai are developing a proposal to install air purifiers on smog towers in Delhi. The tower is envisioned at 20 m tall and will have a large-scale filtration system which will clean the air when pollutants pass through it. The pollutant particles, as tiny as a few nanometres, will be collected using filters. The clean air delivery rate, which is the unit of measurement for clean air, is estimated to be 75 million cubic metres per day, drawing polluted air from the top and releasing cleaner air 3-5 m above the ground. Experts, however, claimed the towers would reduce pollutants significantly but not clean the air completely and would be dependent on wind direction, wind speed, and so on. At an estimated cost of Rs 12 crore, the smog towers will create a clean air zone of 1-3 km at best.

Experts and environmentalists are sceptical of this unproven method. In an open letter to the Supreme Court, members of Care for Air, an NGO working on air pollution issues, pleaded that smog towers are ineffective and a waste of public money. They said that these towers will have minimal impact on PM 2.5 levels—the main pollutants in the region—and the disposal of filters will add to the solid waste burden. To tackle PM 2.5, it is crucial that emissions are killed at the source.

The same opinion was echoed by Anumita Roy Chowdhury, heading the Clean Air Campaign at the Centre for Science and Environment (CSE), a Delhi-based NGO. She said: “The magnitude of air pollution in the Delhi region and beyond requires urgent and deep action to cut emissions at the source of pollution. Outdoor air filters cannot clean up free-flowing breeze and meet benchmarks for ambient air quality. Air quality dividend can be much higher if the same money is spent to eliminate chulhas, dirty industrial fuels, polluting kilns and waste burning.”

In addition, Delhi has been able to tackle safe garbage disposal by only 45 percent, leading to widespread dumping and burning. In spite of repeated orders by the apex court, compensation offers by the Delhi government, subsidised machinery and penalisation in case of non-compliance, farmers continue to burn farm residue. This contributes to over 27 percent of the pollutants during winter in the northern region.

India is not alone in trying to tackle the recurring issue of air pollution. The world over, cities have been trying to control this scourge. From China to Brazil, many strategies and technologies have been experimented with. These can be explored in the Indian context, according to experts. GRAP attempts to tackle emissions caused by vehicular pollution, from brick kilns, stone crushers, hot mix plants, waste burning, diesel generators and thermal power plants, dust and indoor usage of firewood or coal.

One of the innovations which may be presented to the Supreme Court is Japanese hydrogen-based fuel technology for vehicles. Ahead of the 2020 Olympics, the Japanese government plans to introduce electric vehicles which use hydrogen cells to fuel them. The technology is being researched by Kyushu University. Indian government officials are in touch with the University as the apex court had asked the centre to consider the feasibility of such vehicles on Indian roads.

According to experts, cities need to reclaim public transport options and reduce dependency on private cars. In 2011, Beijing and Shanghai capped the number of cars to be sold in a year. Those registered to buy a car are pooled together and only if they make it in the lucky draw can they buy one. The total number of cars to be sold in a year was restricted to 2,40,000 as opposed to the actual demand of 15,15,449 till July 2013. This decision came when the peak traffic speed was reduced to 15 km per hour. Even with the cap, authorities are worried that the situation will not get better anytime soon.

“The public needs to be more vigilant about some of the violations in their neighbourhood. Garbage burning, illegal units causing emissions, maintaining their vehicles, etc. are some measures which can be taken up privately,” said Vivek Chattopadhaya, programme manager at CSE. Collective action is the key to controlling the ever-growing issue of pollution. 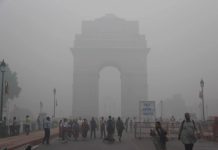 Air Pollution in Delhi: Every Breath You Take