On the evening of April 4, the Supreme Court, a place usually packed with busy lawyers and worried litigants, turned into a different sort of meeting ground. A massive canopy in purple-pink and gold-white colors hung over the central lawn of the court premises as a bevy of lawyers, taking a break from their packed schedules, graced the venue in large numbers to attend an event organised by the Supreme Court Bar Association (SCBA).

This was no ordinary event. It was the final round of a cultural programme titled “Mera Bhi Naam Hoga” organised by the SCBA with the aim to showcase the talent of Supreme Court lawyers in singing, dancing and acting, and even anchoring. The quarter-finals and semi-finals had taken place earlier on March 30 and 31, respectively.

This historic occasion was marked by the presence of several distinguished guests. The event was inaugurated by Chief Justice of India Ranjan Gogoi who was accompanied by Justices NV Ramana, Indira Banerjee and KM Joseph of the Supreme Court. Several senior advocates and members of the SCBA executive committee including PH Parekh, Vikas Singh, Rakesh Khanna and Rupinder Suri also took a break from their hectic schedules to attend the event.

Senior advocate Pinky Anand, who was also present, told India Legal: “Honestly, I was in two minds about coming for it. I was hearing about it only for the last two days. But it’s a very magnificent effort and it’s fun to see people relax in a legal environment which can be very stressful otherwise. I think the SCBA should do more such events which are on a lighter side and have scope for social interaction. This is a great beginning.”

What was even more commendable was the enthusiasm and talent which the participants put on display. Young and old, men and women, singers, dancers and actors, the contestants were a motley mix and regaled the audience one after the other.

India Legal spoke to some of the participants about their experience. Mrs Shobha Gupta, a lawyer practising in the Supreme Court, who danced on the Waheeda Rehman number aaj phir jeena ki tamanna hai, said: “It was a wonderful experience. It has given a very good platform for lawyers to show their talent. I performed on a stage after 20 years and am looking forward to more such events.” Another participant, Stuti Chopra, counsel for the UP government in the Supreme Court, who sang a song from the hit film Raazi, said: “It was an amazing experience. This event is historic. This has not happened before in the Supreme Court of India. The event was organised very professionally and transparently with auditions and several rounds. I am very happy with the turnout and it shows how well the event has been planned and executed.”

Indeed, the event was a packed house as lawyers kept trickling in and out of the venue, some sitting on sofas, some crowding around the stage and others enjoying the snacks. Cheers of “waah waah” and “once more” kept reverberating through the grounds.

And as afternoon gave way to evening, there was a special guest to entertain the audience – comedian Surendra Sharma. Sharma began his performance with a joke especially catered to the audience and said: “I am not associated with this Bar [SCBA] but definitely associated with the bar”. His repartees left the audience in splits. In his inimitable comic style, he also espoused the message of peace, harmony and nationhood while lamenting the highly charged political climate we live in. He was full of praise for the performers and even went to the extent of saying they should join the creative industry. Ending his performance, he told the audience: “The legal profession is a service not an industry. Don’t let it degrade into one. Keep laughing and make others laugh.”

A little later, another powerhouse of talent graced the stage. Padma Shri Soma Ghosh, who was one of the judges for the event, mesmerised the audience with her singing and left them asking for more.

In the midst of all the fun and frolic, the SCBA executive committee also made sure to honour the SCBA employees and thank them for their valuable contribution without which the event would not have been possible. 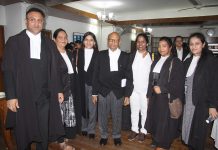