154,225FansLike
654,155FollowersFollow
0SubscribersSubscribe
Home Opinion on News Having a Diwa... 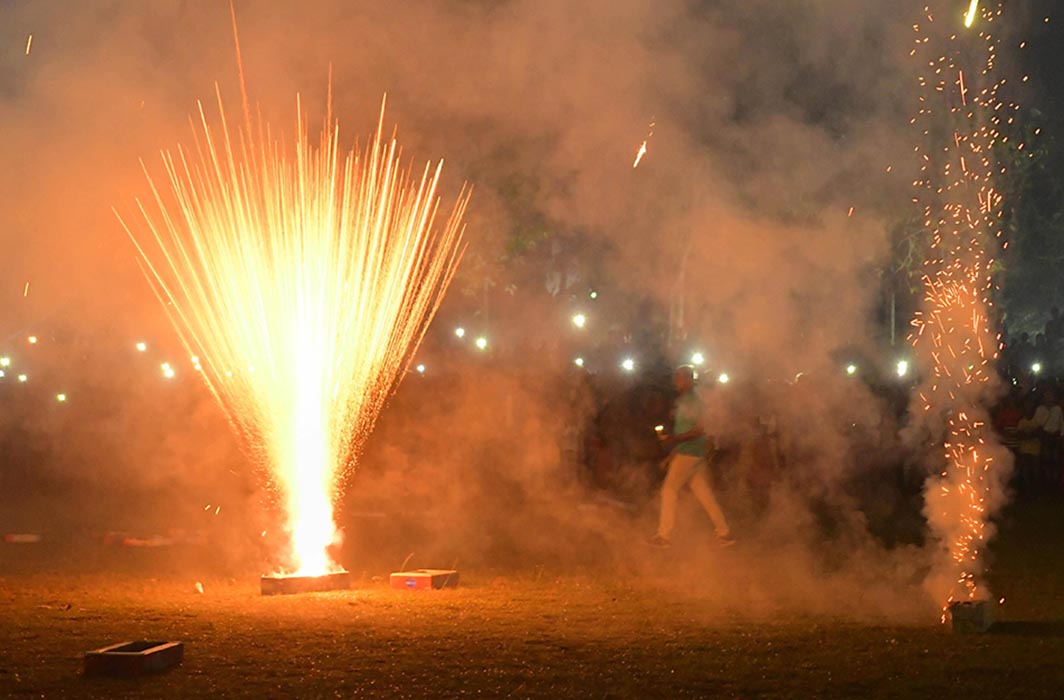 In the days before climate change and environmental issues invaded our sensibilities and lifestyles, Diwali in Delhi resembled what it would be like if an India-Pakistan war broke out. The scream of the rockets trailing sparks, the explosions that came from what were called atom bombs, the Sky Shots, the machine gun-like sounds from the crackers which came in clusters of 100 going up to 1000, and war-like sounds from an assortment of fireworks produced in Sivakasi turned everyone within earshot with hearing problems while just the smoke from four days of expensive indulgence would linger for days, with no thought of what it was doing to our poor lungs. In Defence Colony, where I stayed, there used to be a competition between the owners of two houses located opposite each other in D Block. It was part of Diwali celebrations to drive down to the street on Diwali night to watch the pyrotechnics as both men—one the owner of a popular restaurant in Connaught Place, and the other, a garment exporter, competed with each other to show that “mine is bigger than yours’. The two families would assemble in their respective driveways and their kids had the honour of lighting the crackers and setting off the bombs and rockets. It was a sight to behold, especially when the restaurant owner’s 500-cracker necklace was literally outgunned by his rival’s 1000-cracker version which stretched halfway down the colony road and provided a good five minutes of ear-splitting mayhem. Each family would have spent close to five lakh each on Diwali (not counting the card games) —a fortune in the 80s. We enjoyed the spectacle then, like being at Wagah border and watching the muscular India-Pakistan posturing.

Then, a funny thing happened on the way to the firecracker stall. The kids of both families, now in their early teens, having been enrolled in progressive, private schools in the capital, had clearly undergone a change of heart. One fine morning, a week before Diwali, they appeared on my doorstep, beseeching me not to celebrate with firecrackers because of what it was doing to Delhi’s rising pollution. When I reminded them of the role they had played in the fireworks competition, they sheepishly admitted to the crime but said they were now seeing the side effects—two of the four kids had asthma and one, a girl, had been burnt so badly by a misfiring rocket, that she had to undergo skin grafts. Having raised their awareness levels thanks to progressive teachers, they were now going around the colony door to door, asking residents to shun fireworks. It worked. That Diwali, was the quietest I had witnessed in my colony for decades. They say there is no smoke without fire, but that year, there was no smoke, and no fires either. Today, we are desperately searching for green crackers which are not easily available while online, the rockets and bombs continue to be sold. Diwali started as a festival of lights—it marked the day that Ram returned to Ayodhya after defeating Ravana and completing his 14 years of exile. To mark the occasion, the citizens of Ayodhya decorated the city with earthen lamps to signify the victory of light over darkness. When and where firecrackers entered the scene and turned it into a War of the Worlds, no one quite knows. Certainly not the restaurant owner or the garment exporter.