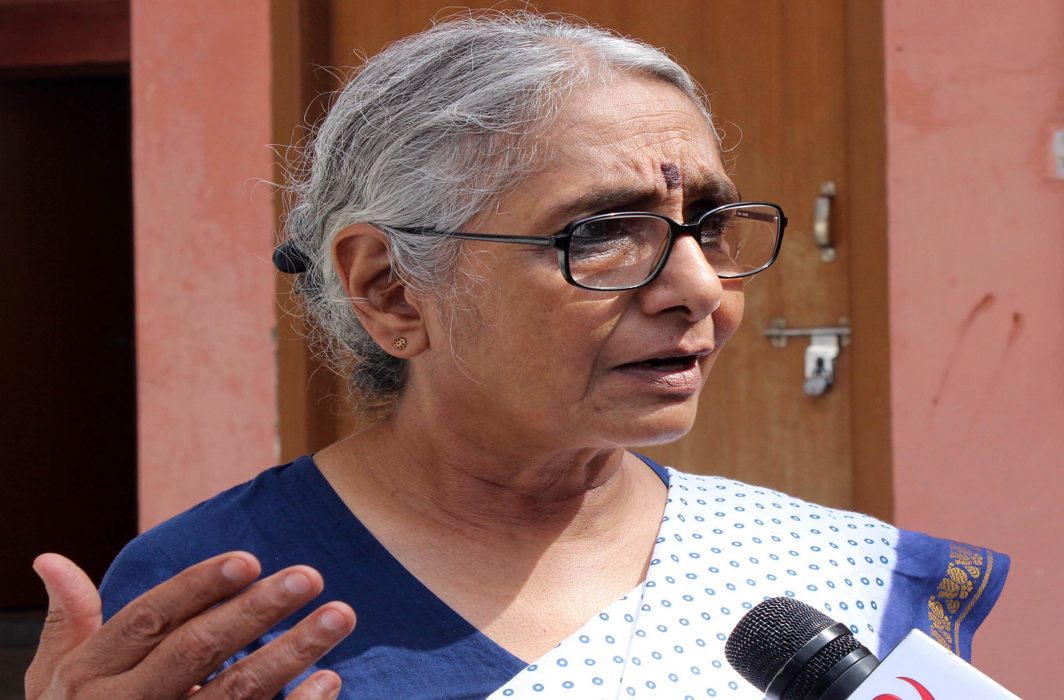 ARUNA ROY resigned from the IAS in 1975 to work with farmers in Devdungri in Rajasthan. She subsequently helped co-found the Mazdoor Kisan Shakti Sangathan (MKSS) whose struggles for fair wages culminated in a demand for the Right to Information (RTI) Act. Her recent book, The RTI Story—Power To The People, voices the struggles of these marginalised people. Roy pushed political parties to ensure that Parliament enacted this law which provides social justice to both the urban and rural poor. She spoke to RASHME SEHGAL about how it was important to shift from a representative to a participatory democracy which is both transparent and accountable.

You gave up a job in the IAS to become a grassroots worker. What led you to take this decision?

The political establishment most often cripples the bureaucracy which does not have the will or courage to oppose it. The bureaucracy is trained to maintain status quo and is in no position to initiate action. I was bothered by the inequalities in society; they did not form a priority for the system despite constitutional guarantees. I had no choice but to opt out.

What made you write this book? At the book launch, you said you were only the sutradhar and presenting people’s voices and their problems.

This is a narrative of people who created history and continue to do so. They are not seen and seldom heard. History is written by the powerful, it is the view from the top. For Indians to realise that they can shape the destiny of the country, they have to go beyond the vote to know what they can or cannot do. We want a shift from a representative to a participatory democracy, which is both transparent and accountable. This book shows that it is possible and has happened.

How successful has the RTI Act been?

Over 60-80 lakh people are using it every year. It is the most used RTI Act in the world. It is being used for hundreds of reasons—getting admission in colleges, copies of government certificates, documents, passports, Aadhaar card… It is a tool which every Indian can use to access power.

But it has also had its share of problems. Many whistleblowers were killed after filing RTIs.

Around 70 whistleblowers have died. We need a law to protect the whistleblower. Anonymity is no solution, especially when a whistleblower dies. On the contrary, every piece of information should be placed in the public domain, conveying a strong message that information cannot be suppressed. The present government has proposed that if an information-seeker dies, then information need not be disclosed. It’s a death warrant. RTI helps to stop arbitrary use of power and corruption through the disclosure of the essential nuts and bolts of governance to the people. Obviously, there is resistance from the system which is riddled with corruption.

Was the RTI Act introduced with the help of different political parties? These same parties today treat the Act like a thorn in the flesh.

No law can be passed in Parliament without the support of political parties. This law was unanimously passed in 2005. We received support from the Congress, former prime minister VP Singh, and the Left parties. The only party that did not support the campaign was the BJP.

The support of political parties to this Act has been rather cautious. The Central Information Commissioner passed an order four years ago that all political parties be covered under the RTI. The parties went into a huddle. The parties have not appointed a public information officer to set up the mechanism of transparency nor gone in appeal. The matter has remained in limbo, with neither compliance nor appeal.

How was the minimum wage movement transformed, thanks to the RTI Act?

People were not getting their minimum wages and were being cheated of their dues. When they asked for various records, they were denied access. It became clear that information had to be disclosed to enable people to access their right to life and livelihood.

Your book mentions how you received a great deal of help from the media. Why is the situation so different today?

Everyone was involved in the campaign, from the village reporter to the stringer to journalists at the national level. The media that talks of neutrality had a vested interest in this Act as it would allow them to access information as a legitimate right. Prabash Joshi, then editor of Jansatta, made a public statement to that effect in Beawar in 1996. Nikhil Chakravartty, Kuldip Nayar and Ajit Bhattacharjea played leadership roles as journalists and campaigners. They helped other journalists understand the importance of the issue. Today, the media is run on heavily commercial lines. Even good journalists rarely get the space they want. Social media has to be understood by movements and by people so that the vital role of the Fourth Estate is not undermined. One encouraging thing is that most media houses have realised the importance of RTI and have functional RTI cells or units.

At the heart of the MKSS is the emphasis on peaceful protest but the State is in no mood to tolerate this. MKSS is fighting a case in the Supreme Court challenging the excessive and arbitrary use of Section 144 of the CrPC.

Section 144 of CrPC prohibits the assembly of five or more people. Oppression and injustice lead to protest. If peaceful protest is suppressed, people will have no option but to use any method to state their grievances. Interestingly, the systematic shrinking of public space is justified as protecting citizens from nuisance; it gains precedence over delivery of justice! The CrPC is a colonial law designed to prevent democratic people’s protest. Peaceful protests are powerful. And that is why the system resists it so much.

In the last four years, even the limited space for protests has been out of bounds. The government has cordoned off the whole of New Delhi and the alternative provided is the Ramlila ground which can be hired at Rs 50,000 per day. How many poor and marginalised people can afford that? Look at the absurdity—can a poor pensioner demanding  Rs 200 per month pay this kind of money for space to protest?

Is this a democracy when it is so biased and where commercial interests control the system? Despite the propaganda against the Planning Commission, it provided us a large window to look into the workings of the government and critique five years of proposed planning and expenditure. In getting rid of the Commission in favour of an exclusive Niti Aayog, transparency has been drastically reduced. We don’t know what the government plans to do and the budgets and sectors in which they will be spent. With the earlier system, we had time to negotiate with the State. Now you know nothing and therefore, you are caught by a fait accompli.

Transparency has also taken a hit with the formation of new opaque laws and policies. Take electoral bonds, for instance, whereby political parties can receive money without any accountability. The Lok Sabha on March 18 passed a bill—without any debate—to exempt political parties from scrutiny of foreign funds received since 1976. The Representation of the People Act, which lays down the rules for elections, bars political parties from accepting foreign funds. However, the Finance Bill passed in 2016 had amended the Foreign Contribution (Regulation) Act (FCRA) to make it easier for parties to accept foreign funds. It has now been further amended to do away with the transparency and public scrutiny of funding of political parties. The retrospective amendment will help the BJP and Congress not to face the courts, where in a 2014 Delhi High Court judgment, both were held guilty of violating the FCRA.

This government also first attacked the right to freedom of expression. It began with activists being dec-lared anti-national and anti-development. It next unleashed negative propaganda on RTI claiming that the passage of this Act was solely responsible for “policy paralysis”. It then systematically destroyed the character and public image of people who fought for rights, creating a pall of suspicion around them. The attempt to discredit activists and campaigns for demanding constitutional and democratic rights was a necessary prerequisite to stop the questioning. If space for questioning shrinks, democracy and RTI too will be squeezed out. Voices of dissent were systematically discredited or silenced such as Priya Pillai, Teesta Setalvad and Gauri Lankesh. The media, which was brave enough to give space for these voices, was threatened. It has left the Indian people confused. For unilateral governance to flourish, the space for discourse has to be removed. How else can a manufactured single narrative claim truth and credibility?