Former Solicitor General GOPAL SUBRAMANIUM has had an illustrious career. Starting as a counsel with the Justice AN Verma Commission probing into Rajiv Gandhi’s assassination, Subramanium has handled many prominent cases. He figured as lead counsel in the 1993 Mumbai blasts and the 26/11 Mumbai attack cases. He also took up the parliament attack, the Graham Staines murder and the Jessica Lal murder cases as public prosecutor. He is amicus curiae in the BCCI matter and in the Padmanabhaswamy Temple case. In an interview to NAVANK SHEKHAR MISHRA, Subramanium talks about the achievements of the Indian judiciary, and its drawbacks. Excerpts:

As a lawyer, jurist and legal luminary, which cases do you remember as turning points in your career?

I have done a large number of cases in different fields. I can mention two cases which gave me a sense of complete satisfaction. One was the parliament attack case. The accused were represented by very eminent counsels—Mr Jethmalani and Mr Shanti Bhushan. I don’t think anybody could have heard better arguments for the accused than these two counsels in the matter. One of the accused was discharged by the high court. We filed an appeal against his acquittal. I was actually polite, and so was he. But I think, what was witnessed in that case is that as a prosecutor, you don’t argue a case with any sense of vengeance. You argue a case for the purpose of justice. That requires a tremendous degree of objectivity and dispassion. That is something that brought me a lot of satisfaction.

The second case I did was the 26/11 one. There also, I experienced a similar sense of satisfaction. In this case, the court recorded some magnanimous words of appreciation for me in the judgment. The feeling that you are fair is important. And you are performing a greater role for your country which is not with any sense of retribution but a sense of justice.

What are the achievements of the Indian judicial system?

Over a period of time, they have written extraordinary judgments. If you compare the judgments of the Supreme Court over the last 50 years, you find some of these are quintessential pieces of learning. I would rate them as great pieces of prose, or great pieces of literature. The Indian Supreme Court has stood up for citizens, it has protected the constitution and fundamental rights. It has given meaning and hope to a citizen.  And I think, that in itself, is an extraordinary contribution.

The evolution of public interest litigation has provided a great impetus. Many times, the jurisdiction exercised by the court has been termed judicial overreach. I think there are gaps when there is total executive inaction and the judiciary has to intervene to make the rights of human beings meaningful. And it is in this sense that the Supreme Court intervenes.

The judgment in the Keshavanand Bharati case (on the power of the parliament to amend the constitution) is one of the great contributions of the SC in establishing what I consider to be the basic structure of the constitution. So the Supreme Court has tremendous judgments to its credit.

We must bear in mind that the standards of judges of the SC and the high courts have been comparable for a large number of years. It was not always possible for every judge of a high court to come to the Supreme Court because of a limited number of vacancies. But the quality, the competence, as well as the integrity of the judges in the high court was almost similar.

Article 32 (3) of the constitution enables parliament to pass a law empowering a court, apart from a high court and Supreme Court, to possess samilar powers. This means the constitution makers intended that we would have a three-tier judiciary, wherein, in terms of moral character, independence, ability and capacity to understand human rights and executive behaviour, legislative behaviour it (the caliber of judges) would be more or less the same. Unless and until we bring about a degree of comparability in these aspects, I don’t think we would be fulfilling the true purpose of the constitution.

What would you say are some of the drawbacks?

The second thing that I am concerned about is that judges, who are appointed to the high courts, should also be prepared to consider that it’s a great thing to be a judge of a high court and a great thing to see their judicial career end as a judge of a high court. It is not possible for everyone to become a judge of the Supreme Court. I believe a judge is one who accepts the office without expectations. I feel that to even import into the character of a judge any form of expectation is distractive of judicial independence.

I am concerned about post retirement positions which are offered to judges. The correct course is that the government must offer the last drawn salary as pension for life as far as judges are concerned. It is a financial investment but it’s entirely justified.

I also maintain that if you have stringent criteria of merit, then merit alone should count for elevation to the high court and the Supreme Court. I personally believe that the Collegium of the Supreme Court must have an internal set of criteria—may be five or 10 point criteria—which enables some degree of insight into the profile of the candidate. To be a judge of the high court or the Supreme Court, you will not simply pass orders but write judgments and that is a skill that requires knowledge and a great deal of industry.

One great enemy of a lawyer, and a greater enemy of a judge, is ego. One significant attribute of the judges in the past has been their ability to set aside their ego, the ability to keep away any forms of overtures by the executive government, to be independent, to be respectful to all members of the legal profession. I can say with great pride the respect with which I was treated by Justice YV Chandrachud was equal to the respect with which he treated the attorney general on the other side. 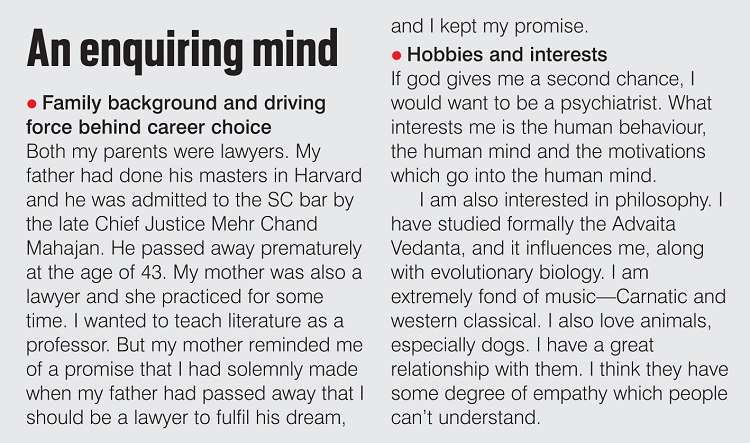 What are your views on lawyers resorting to strikes?

For every situation, lawyers are not justified in going on a strike. But there can be some extremely ghastly situations where lawyers feel completely perturbed. It is in those situations that

I think a chief justice must understand that there could be a cause for the lawyers to abstain from work. It would be unfair to make a blanket statement that there can never be a situation where lawyers can voice their protest.

It isn’t always possible for every judge of a High Court to come to the Supreme Court. But the quality, competence and integrity is same in both the courts.

I would also like to give some advice to upcoming lawyers. It’s a mistake to look for money too early. You have to be a long-distance runner. You have to be simply prepared to be patient. But when the right moment comes, you have to be alert and seize the opportunity. Two, never do or say anything in a court which you regret when you go to sleep. Three, this is, after all, a noble profession. We are not agents for a client. We have to keep a distance from our clients, however much true, faithful and sincere we are.

India Legal has started a free legal aid. Any message in this regard?

It’s the greatest thing that anybody can do. When I was about to join the bar, I actually went to a place at Kingsway Camp in Delhi, inspired by a professor of mine. And I found that people were detained in a beggars’ home because they begged on the streets of Delhi.

It was considered to be an offence under law. But I saw their condition. I saw how long it took for them to be produced before a magistrate. I have never forgotten what legal aid meant to me at that time. So I truly believe that legal aid, truly practised in our jurisdiction in India, can bring about a lot of relief. One of the obligations of any lawyer is that while he charges clients who can afford to pay him, he may subsidise his monthly work by offering some degree of legal aid. It will keep his motor running, it will keep his conscience alive and the sensitivities afloat. And we should never forget that we have the poorest of the poor who are as human as us, as important as us, under the constitution, who are entitled to realise all the dreams that were promised to them by the founding fathers of the constitution.

Who have been your inspirations in the legal field?

From a very young age, I had met some great people of the legal profession, particularly eminent lawyer, the late Motilal Setalvad. I was inspired by his austerity, his integrity, and above all, his deep sense of rectitude and dignity. Great people can have tremendous impression on your mind, when you are young. I have been deeply influenced by former Attorney General SC Gupte, senior advocate Anil Divan (who passed away recently) and eminent lawyer and former adviser to the Ministry of External Affairs B Sen (he died in November 2015). My own senior, Mr Soli Sorabjee, is a man of many parts and many tastes and has great love for music. Above all, he is a man who truly loves law.

Some great judges have also inspired me. I have been influenced by their simplicity, the depth of their learning, the abandonment of their ego, and how they have transcended their own knowledge to dispense justice.

So I have seen a lot of people. And the past has its own values, traditions, principles, rectitude, and a certain degree of purity.

For me, it is that past that matters, and I would like to live and die in that past. I don’t think I will be able to withstand any dilution of that past or any compromise with it. 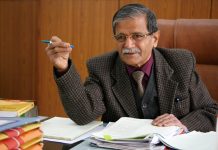 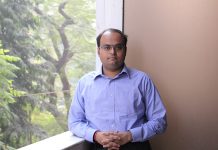