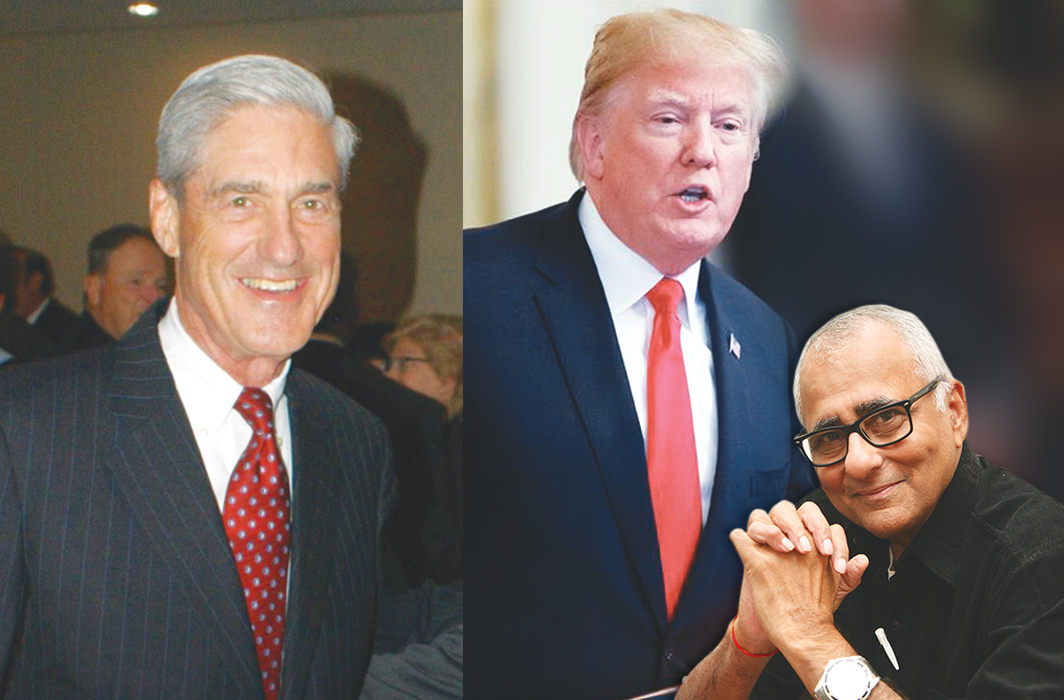 “Look, it’s VERY simple: -If it exonerated @realDonaldTrump, he’d have tweeted a link to it & insisted the Times publish it in full. Since he’s hiding it/desperately wants to keep you from reading it, it means he’s guilty. #QED.”

The above tweet, quoted in this issue by our US special correspondent, the prolific Kenneth Tiven, one of the very best in the business, is a pithy answer to lengthy ruminations by the media punditry on the nature and ambivalence of Special Counsel Robert Mueller’s final report on whether President Donald Trump should be held accountable by the justice system for colluding with a foreign power (Russia) to obtain help to win his election, and then ordering a cover-up of the probe.

A cover-up—obstruction of justice—is considered a very serious crime as well as an impeachable offence if committed by POTUS. Richard Nixon faced impeachment and was driven out of the Oval Office after special prosecutors and Congress relentlessly lowered the boom on him and a bevy of conspirators during the Watergate investigation in the 1970s.

America appears confused by the Mueller report. Well, actually it’s not the Mueller report but a summary prepared by Attorney General William Barr for Congress. Barr’s interpretation appears to be that Mueller and his team absolved Trump, but not Team Trump (otherwise why would so many of them have been indicted by Mueller, and even jailed?) of Russia-collusion charges but did not let him off the hook on obstruction of justice. Remember, Barr is a die-hard Trumpist who had publicly proclaimed, even as the investigation was under way, that the collusion probe should have been junked at the start. He was appointed despite protests against his partisanship. And Mueller reports to him in the chain of command.

Trumpists are proclaiming—on the basis of the Barr summary—complete vindication and pointing to the probe as an example of a witch-hunt and gratuitous harassment of the executive. Opponents, who include powerful members of the Congress, including the chairman of the House Judiciary Committee, argue that the summary does not say that Mueller exonerated Trump on the obstruction of justice issue. They are demanding that the report be made public.

Social media outpourings, apart from the obvious
rah-rah-Trump rantings, have been interesting, especially posts from people who were convinced that Mueller’s 21-month-long investigation would bring down Trump. Says distinguished author and top investigative journalist Dan E Moldea: “Mueller and his top tier of talented and dogged investigators—all of whom I admire and respect—have spoken. I can’t believe they didn’t do their absolute best to get to the bottom of the Russian conspiracy matter.

“Even though the issue of obstruction remains unresolved, there will be a lot of crow eating in Washington and I will be having mine sautéed with a side dish of humble pie. Regardless, I continue to insist that Donald Trump is both corrupt and dishonest and provably so. I await the results of the ongoing investigations by the US Attorney’s Office in Washington, DC, New York, and Alexandria, Virginia, as well as the State Attorney General in New York and the District Attorney’s Office in Manhattan, along with the Judiciary, Intelligence, and Oversight Committees in the House of Representatives… Meantime, Trump and the Fox News crowd will be dancing on our heads.”

I could not resist responding to Dan, an old friend, on his Facebook timeline. I wrote: “I’ll be eating mine too, with side orders of Flynn, Sessions, Gates, Cohen, Manafort et al who ran Trump’s businesses, his election campaign, served in his cabinet… lied about their Russian connections and the Trump Towers meeting lockstep with their boss.

“I suppose they were indicted, locked up, or forced to resign for no other crime other than discussing the minimum temperature in Moscow. I have always argued that America can only punish a wayward president through the political process of elections and simultaneous Congressional hearings and not through the administrative or judicial system.

“This proves the arrival of the Imperial Presidency which even a so-called ‘independent’ Counsel cannot breach. You need a Sam Ervin and Howard Baker (Senators who conducted the Watergate hearings) and Peter Rodino (who led the House Watergate probe) working in tandem.”

Echoing Howard Baker, the questions that go abegging are what Mueller really knew and when he knew it, the thresholds and levels of proof he applied to Trump as against those he used with which to judge Trump’s cronies whom he indicted. Also, has Barr interpreted Mueller correctly? My view is that serious journalists like Dan have no reason to apologise about the great work they have been doing in exposing Trump. They must never give up. The bigger challenge is to investigate even deeper to find whether the Russian tentacle has encircled not only Trump but also the justice system.

Dan was quick in his response: “I’m not giving up. But for the past two years, I have predicted that Bob Mueller and his team were going to use RICO (the tough interstate racketeering statute), among other prosecutorial weapons, against Trump and his stooges. In the end, they didn’t. So, in short, I was wrong, and I believe I have a responsibility to admit it.”

As our own writer Tiven sums it up: “A soothsayer told the family of a very famous man that the tea leaves indicated the health of the individual was terrible. The family asked: ‘May we see the tea leaves?’ Not now, they were told. Maybe someday. That is the situation in America with special prosecutor Robert Mueller’s 21-month probe into President Trump on matters of collusion with Russians in the rigging of the 2016 US election as well as obstruction of justice.”

But the teacup may not be able to contain the storm brewing within it.