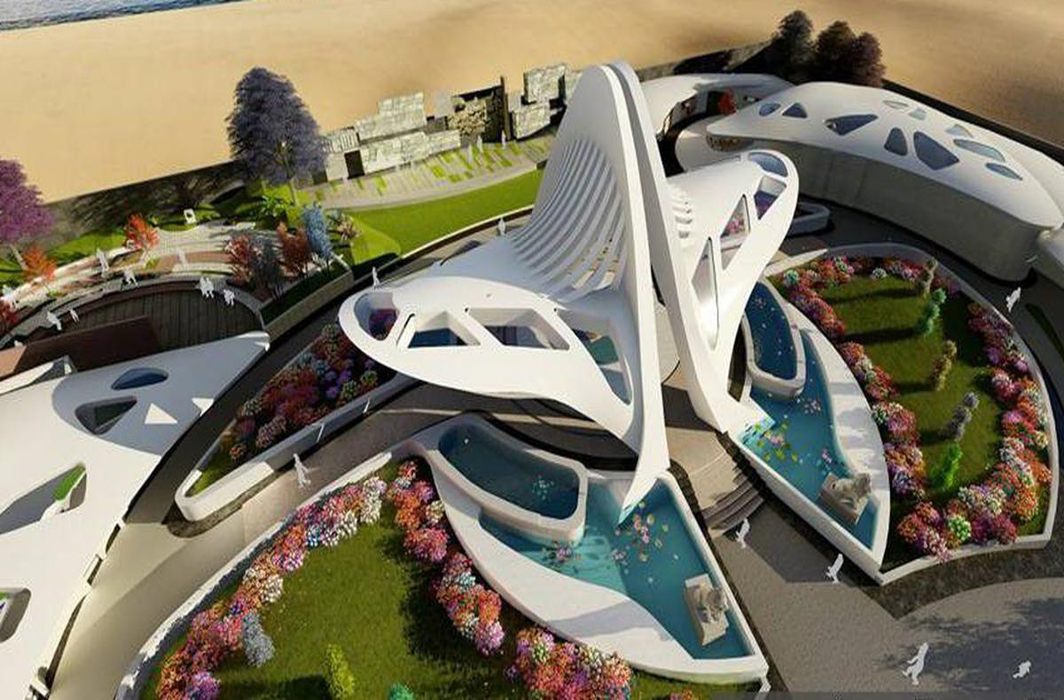 Above: An artist’s impression of the proposed Jayalalithaa memorial on Marina Beach/Photo: UNI

Environmentalists, political parties and anti-graft crusaders oppose the AIADMK government’s decision to build it on the sands of Marina Beach

Few politicians in India have faced as many corruption charges (and even been convicted) as the late Tamil Nadu chief minister, J Jayalalithaa, but that hasn’t stopped the clamour among her successors in the AIADMK government and the party to build memorials in her name. The state government had allotted Rs 20 crore a few months ago to convert Veda Nilayam, where she lived as chief minister, into a memorial. Now plans are afoot to construct a “grand memorial” at her burial site on the famous Marina Beach in Chennai, at a cost of Rs 50.80 crore.

The decision has created a huge controversy in the state. The government’s move has been challenged in the Madras High Court by two individuals and the Court will take up the matter on June 6. Earlier this month, Chief Minister Edappadi K Palaniswami and his deputy and state Finance Minister O Panneer-selvam laid the foundation stone for the memorial, following which the duo sat through two hours of Vedic rituals along with their own party’s senior leaders and hundreds of cadre members at the place where Jayalalithaa was buried.

The memorial being raised near Jayalalithaa’s grave is called the Phoe­nix. It is designed to resemble the mythical bird which supposedly represents the former chief minister’s “persona”. It includes a 15-metre monument, a museum and a “knowledge park”, surrounded by landscaped gardens with two roaring lions at the entrance. 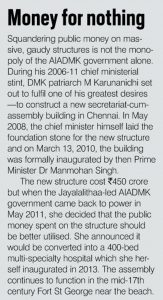 Opposition to Jayalalithaa’s memorial came from two angles. One is whether the state can fund and construct a memorial for a person who was convicted by the Supreme Court in a corruption case. The second one is the environmental angle. “How can the government construct a memorial for a convicted person, and moreover, without obtaining proper permissions from the relevant authorities?” asks lawyer S Jayaseelan, a petitioner in the case.

There is also another petition pen­ding with the Madras High Court for the past six months, filed by a well-known social activist in Tamil Na­du, “Traffic” Ramaswamy. Several environmental activists are also op­posing the memorial and they say these sorts of activities—constructing grand structures like this on the beach—are totally against the strict Coastal Regulation Zone (CRZ) rules.

Jayalalithaa died on December 5, 2016, after 75 days of hospitalisation in Apollo Hospital, Chennai. Corruption cases had followed her like a shadow since June 1991 when she became chief minister for the first time. She ruled Tamil Nadu for 15 years and three terms and was elected for a fourth term in May 2016, months before her death.

Barring the ruling AIADMK, all other political parties in Tamil Nadu oppose the move to construct a memorial for Jayalalithaa because of her conviction in the disproportionate assets case by the Supreme Court. The case was filed by the DMK government after it came to power in May 1996. The Directorate of Vigilance and Anti-Corruption wing (DVAC) of the Tamil Nadu police filed a disproportionate assets case against Jayalalithaa, her close aide, VN Sasikala, and two of Sasikala’s close relatives, Ilavarasi and VN Sudhakaran.

In 2003, the Supreme Court shifted this case from Chennai to Bengaluru on the basis of a petition filed by the principal opposition party in the state, the DMK. The case dragged on for 18 years and on September 27, 2014, a special court in Bengaluru awarded four years of imprisonment to all four and slapped a fine of Rs 100 crore on Jayalalithaa and Rs 10 crore each on the other three. However, the Karnataka High Court acquitted all four on May 11, 2015.  But, on an appeal from the Karnataka government, the Supreme Court upheld the Bengaluru trial court order on February 14, 2017, and sent the other three to a Bengaluru jail. Since Jayalalithaa was not alive nothing could be done.

Dr S Ramadoss, founder of the Pattali Makkal Katchi or PMK, says, “This memorial is akin to crowning corruption. It’s a dangerous trend and should not be allowed.” The Congress is harsher. “I think laws are clear. As per the Supreme Court judgment, Jayalalithaa is equally culpable and in fact acted as a brain behind many of the actions of the other accused. Jayalalithaa is a convicted criminal albeit after her death,” says U Balaraman, a former Congress MLA.

As far as Jayalalithaa is concerned, it could be just another legal battle after her death. While fighting over a dozen cases filed by the DMK government and one filed by the CBI, Jayalalithaa had used the services of almost all the top legal brains, rather, top lawyers of the Supreme Court, for one case or another. There were four former Union law ministers, Kapil Sibal, Ravi Shankar Prasad, Arun Jaitley and Ram Jethmalani… other top lawyers included Fali S Nariman, Soli Sorabjee, K Parasaran, KK Venugopal, Mukul Rohatgi, Siddhartha Shankar Ray, Rajeev Dhawan, and so on, and all of them argued for her either in the Madras High Court or in the Supreme Court. Since Jayalalithaa was using their services from 1993 to 2016, one can easily imagine the fees and other expenses she would have met.

But there is a change this time. Now the legal expenses are going to be met not by Jayalalithaa but by the AIADMK government.